Home » Blog » Understanding Men » I Miss Him So Much Because He Vanished – What Should I Do?

“I miss him so much.” Here’s my best dating advice for a woman pining away for a guy that vanished and she just doesn’t know how to reach out to him.

She Misses Him A Lot 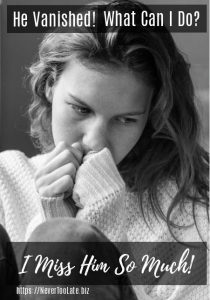 I’m in a bit of a pickle! To be clear, I don’t want a relationship with the man/best friend I have. We both have feelings for one another and have fooled around.

I hate to admit it but he does have a girlfriend whom he is not happy with. It’s a convenience thing for his work situation.

We bonded immediately when we met – he had a horrible childhood, and struggled with alcohol and depression. Just getting together at my place to watch a sports game or sit by the fire was relaxing (and we weren’t always intimate).

I appreciated that he was showed me his true self and trusted me.

His job has him on the road a lot now. I hear from him much less but when I do, he says that we should meet up. I tell him absolutely I want to see him and he gets extremely flirty.  Our sexual chemistry is off the charts.

Remember, we also just have regular conversations etc. .. he’s not using me for anything, nor am I using him.

I just don’t know the rules at this point for calling him out on his vanishing and not committing to seeing me. After all, it was his idea to see me!

I have an entire week off coming up. I feel like I should say, “I am available until this date , now is your chance to take advantage of meeting up! Can’t wait to c u!”. What do you think?

I miss him so much and have even considered telling him that I worry that I’ll never see him again.

Are You Honest With Yourself?

First, while my advice is blunt and to the point, I care about every woman I respond to. I have compassion and from this place, I do my best to explain things as I see them.

Let’s start by looking at the inconsistencies revealed in your question to me.

You said you miss him because you haven’t seen him recently, right? If this isn’t a relationship, then what is it? If you think it’s just casual, why do you care if you never see him again?

Casual relationships are not about feelings and you certainly have them for this guy. After all, you told me “I miss him so much.” That’s not a take it or leave it sort of thing.

So, it’s time you were honest with yourself about your feelings for this man.

The next piece is that you trust each other. I can see why he might trust you, but why do you trust him? After all, he’s cheating on his girlfriend. That means he lies to her, so how do you know he doesn’t lie to you as well?

Now he’s on the road and he says he wants to meet up. Yet, you can’t pin him down or make a plan. When you bring it up – he disappears! That doesn’t sound very trustworthy to me.

He’s Not Using Me

It’s interesting that you don’t think he’s using you based on how he has regular conversations with you.  Men who want extracurricular partners, also want to stay in touch to keep a woman interested and connected.

Maybe he’s not using you, but he is having relations with two women.

The truth is a lot of men need a woman for comforting conversation too and not just sex. They like knowing someone cares or perhaps more than one someone. Multiple women is good for the male ego – but not so good for the women. 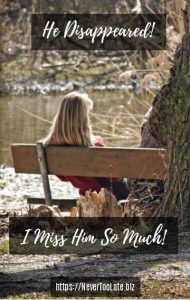 The fact that he has vanished as you say is not a good sign which is why you wrote, “I miss him so much”. This is especially after suggesting getting together. A lot of men want to keep a woman thinking they are together, even when they aren’t to feel powerful or sought after.

It’s time to realize his disappearing act is telling you something. I’m so sorry to say it appears you are more into him than he is into you. The proof is you can’t get him to plan a time to meet.

What Are The Rules?

Anything goes in a causal relationship because you aren’t invested in doing everything the best way possible to establish a lasting, loving relationship. That means, if you want to reach out, call him out or whatever, you are free to do it.

If you were in a relationship, I would tell you that it’s time to see what he is really made of. My advice would be to give him an ultimatum, but only if you are SURE you will follow through.

You could say, “If you want to see me, I’m free this whole week. If you can’t make it I’ll take that as a lack of interest and move on. No hard feelings.” This is very clear and allows him to make a choice.

Does He Want To See You Or Let You Go?

I know this is hard. Telling me “I miss him so much,” lets me know you are in some amount of pain about this guy.

However, never let yourself be jerked around by some non-committal guy. This damages your self-esteem and self-worth. You want to have firm boundaries with the men you date, letting a man know when he has crossed a line.

It’s not some big emotional blow up. This is done calmly and clearly with the script I provided above. You are letting him know it’s time to make a choice OR YOU WILL DO IT FOR HIM. This comes from a stronger place then calling him out about vanishing.

A Woman Who Values Herself 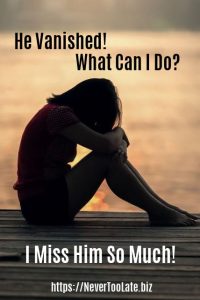 When you value yourself and know your worth, you won’t leave your fate up to a vanishing man. You’ll see that he has pulled away and is not a man of his word.

And you’ll want to shake free to find a better man. A man who is interested in only you. A man who WANTS to spend time with you and MAKES IT HAPPEN.

People make time for what is important to them. If he’s avoiding scheduling time to see you, that’s his clear message he doesn’t want to see you. If he did, he would set something up.

I hope you won’t tell him you fear you’ll never see him again. Oh, the power over you that gives him! Once he knows this, he can do whatever he wants, because he’ll know how much you care.

Wanting to tell him about your fear and “I miss him so much” is another sign that you feel connected to him and of being in a relationship of some kind.

My hope for you is that after reading this, you find your inner strength and realize you deserve better! You’ll stop saying, “I miss him so much” and let go. You might want to read this post on holding a torch and 7 methods to let go.

You deserve to be in a relationship with an honest man who cares for you and wants to spend time with you. Not some guy that strings you along on his own time table.

I’m not sure what your issue is with being in a relationship and maybe that’s only with this guy. It sure seems to me like you want a relationship with someone you can see more regularly.

I truly hope you go for it and look for a new guy. The kind of man who once he gets to know you, discovers there is no other woman like you, which makes him cherish you all the more.

Want to know how to attract a quality guy? Check out my Free audio program

10 thoughts on “I Miss Him So Much Because He Vanished – What Should I Do?”