By reading his body language, you can figure out if a guy likes you. Learning how is easier than you might think so read on to find out what you need to know. 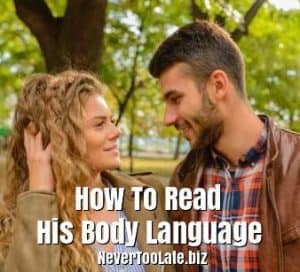 You think he likes you, but how can you tell? Not knowing is so hard to handle. The start of dating someone new is exciting with all the possibilities before you. When the chemistry is hot, you can feel it like electricity running through your veins.

But, the first time you meet a man and the first few dates can also be anxiety-filled as you hope this guy likes you as much as you like him right now.

Many women wonder if there are signs to watch for that make it clear he’s into you. The answer is YES, absolutely! You can learn to watch his body language – the little “tells” that let you know he’s attracted and interested.

You don’t need to be an expert in body language and non-verbal communication to figure this out. With a little practice, and the knowledge of what to look for, you can spot these signals easily.

Keep in mind, men do not make these moves consciously. Reading body language is about what he’s thinking and how he’s revealing that subconsciously, so don’t call him out if you notice these signals.

This is a time to use your feminine wiles to make note of his physical reactions. Be smart and keep this little secret to yourself because the last thing you want to do is embarrass a man you find attractive.

His Body Language – 20 Signs He’s Into You

I’ll explain 20 signals you want to watch for below, starting with his head, all the way down to his toes, and then add in a few more just to be sure you catch everything that matters!

When this new guy looks at you, his eyebrows go up. It’s a quick little movement that lets you know he see something of interest – you!

While this isn’t always easy to notice, especially when the lighting isn’t good, if a man’s pupils dilate and appear larger than normal, that’s a sure sign he’s into you. This is a natural biological response that gives his thoughts about you away.

His smile isn’t just some little smirk or a tight-lipped grin. No way! He smiles big for you, showing off his pearly whites. Next time a man smiles at you, pay attention to if his front teeth show – that’s a well-known sign.

Focuses on Your Face

One way his body language tips you off to what he’s thinking is when he looks at your face. This includes more than eye contact. Hopefully you will look eye-to-eye, but also he will look at your lips too. That means he’s thinking about what it would be like to kiss those sweet lips of yours.

As the conversation between you and this new man progresses, you can tell if he’s really listening if he tilts his head when you are speaking. This is a classic “tell” that he’s really taking in what you are saying and definitely interested in you.

You may have thought only women primp and fidget as part of flirting, but men do this too! These small attempts at grooming, like making sure his hair is in place or checking his shirt is tucked in, let you know he wants to look his best for you. A man who cares about his looks wants to make a good impression on you.

If you notice a man suddenly moving his shoulders back straightening up and puffing out his chest – he is expressing his manly traits for you. This is the same as a peacock spreading his tail feathers to impress and attract a female.

Sometimes when a man sees a woman he’s taken with, he’ll place his hands on his hips with his elbows angled out. This is a classic stance that allows a man to take up more space. His great physicality is a sign of showing male prowess – trying to get your attention.

Not just in classic wild west cowboy movies, men today also hook their fingers into their belt, hold onto their belt or belt loops. This does cause his elbows to angle out in the same way as putting his hands on his hips. But, it’s also a  subconscious way a man will point to his “junk”. Nothing more manly than that to try to impress you.

If you are sitting near a man who starts to get comfortable around you, he’ll likely spread his legs and sit with his knees wide apart. You see men sit like this all the time.

Sometimes a guy will also stretch and put his hands behind his head, making his elbows stick way out. Again, these are more signs of a man’s physicality to display his masculine superiority vs. other men.

Torso Turned Towards You

Even if his whole body is not turned in your direction, if his torso faces you, that’s his body language letting you know he’s into you. This could be seen whether he’s seated or standing.

You can tell he’s really into you and the conversation if a guy leans in to get closer.  This lets you know he’s intrigued and captivated by your discussion and wants to know more. That’s why he leans his upper body towards you.

Toes Point To You

Even if his body is not turned completely towards you, watch where his toes are pointing.  Whether he is seated, has his legs crossed or is standing, his toes are a guaranteed give away about his interest in you.

Sitting across the table from a hunky guy? If he reaches his foot across, by accident or on purpose, that’s a signal of his attraction. Playing footsie as this is called, may seem silly, but it counts so don’t deny it!

Here are six more important tips that let you know a man is attracted and interested. Some are about his behavior and others about how he chooses to interact with you. Check out these last few signals that let you know he likes you.

When a man breaks the barrier of your physical space, he wants you. Sometimes this is a test to see how you’ll respond. For example, he may reach over and tuck a bit of your hair behind your ear. This move is definitely flirty, but also endearing.

Or he may be bolder and rest his hand on your knee. This often indicates his desire is getting the better of him and he’s thinking about how much he wants to sleep with you.

Holding hands is certainly an affectionate move. But how he does it matters as well. If he really presses his palm into yours or interlocks fingers, he is expressing his desire to get closer.  Sweet!

Sits Next To You

You probably remember being on the school bus and the first time a boy came to sit next to you. That move to be near you is still a great body language tip off that he’s into you.

Walks At Your Pace

If the man you’re with is taller than you, he’ll likely walk faster as well. So, when he slows down to match your pace and walk long side you, that’s a great signal he’s into you! His body language tells you he cares and is thinking about what works for you.

In this time of technology, when a man stops incessantly checking his phone, that’s a sure-fire sign he’s into you! If he puts his phone away or ignores the rings and buzzing, you’ve got him on the hook girlfriend!

As your first meeting or date comes to a close and you part ways, should he look over his shoulder or turn to glance back at you – bingo! He’s interested. This is his body language giving his feelings away that he’s into you and you will most likely hear from him again soon. 🙂

If you want to better understand men and discover the secrets to capture his heart, let’s talk. Schedule a complimentary 45-minute call and discover what’s blocking you from finding your dream man and how to turn that around.