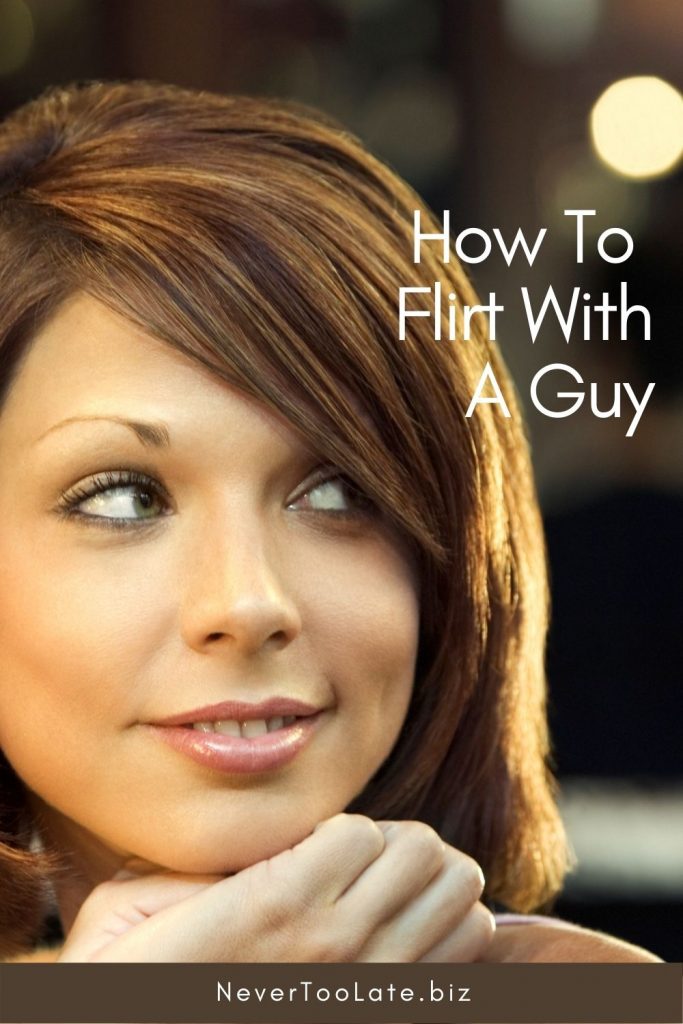 Curious how to flirt with a guy? It works regardless of your age or his! Flirting is the feminine energy way to connect with a new man and capture his attention. Read on to learn how it works.

Men don’t think like women do. For the most part, men don’t wonder why things are the way they are or search for deeper meaning. A man’s thought process is far more direct than that. They tend to take things more at face value.

In order to capture a man’s attention, you can’t be too subtle. You want to rely on body language moves that signal you are open to talking with them.

The boldest approach is to hold a man’s gaze, while smiling, for 3-5 seconds (at the most!) before gracefully turning away. Then, check back a few minutes later to see if you catch his eye again. This is how to flirt with a guy and after that second glance, he’s likely to walk over.

This is a great non-verbal way to let a man know you are interested.  And it’s called FLIRTING! 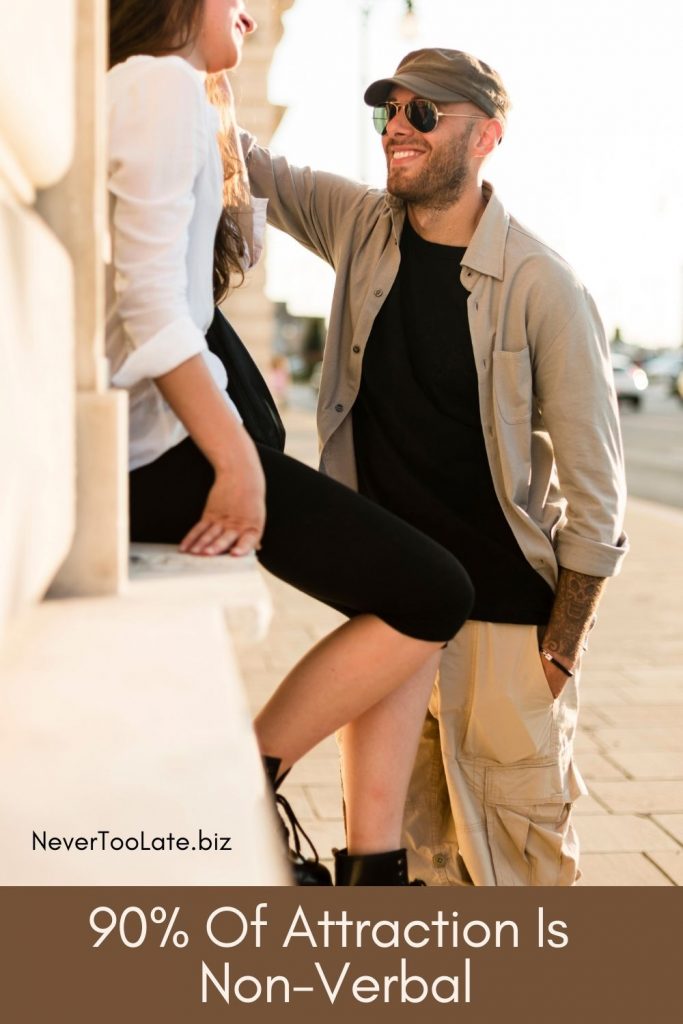 Over 90% of Attraction Is Non-Verbal

That’s why flirting is so powerful! You are sending non-verbal signals using body language to communicate you are friendly, open, nice, inviting, and willing to talk with men.

The point of flirting is to help men get past the social barriers to meet you. In other words, you are lowering the risk for rejection by telegraphing a friendly demeanor.

You might not realize this, but most men prefer to avoid rejection. That’s why they might not take the chance to approach you. But, if you use these non-verbal signals, they will pick them up instinctively and be more willing to take that social risk. 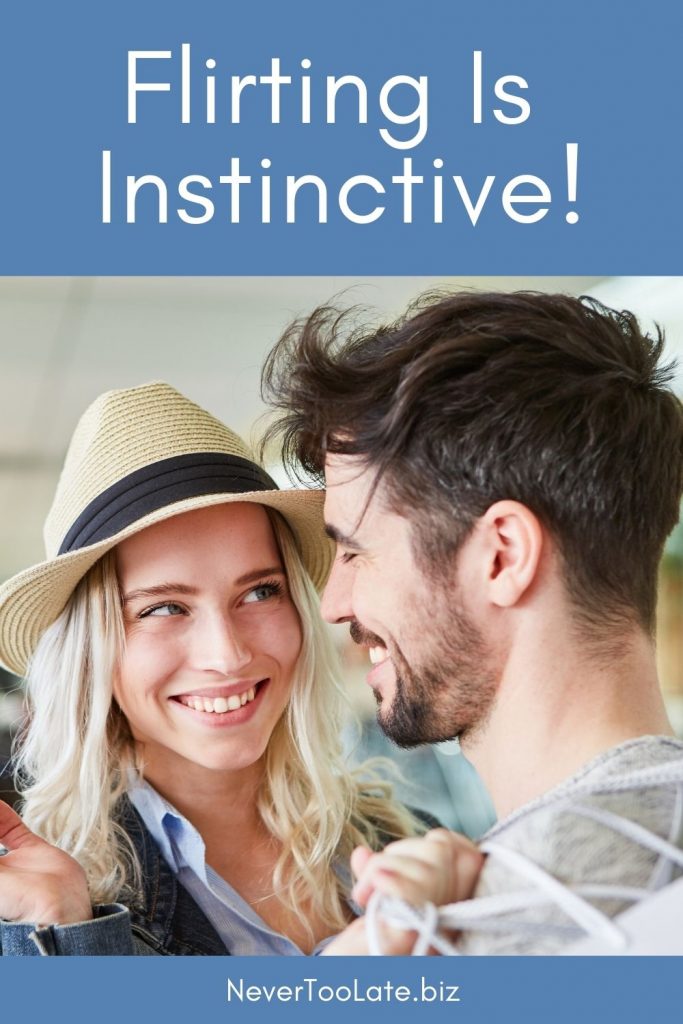 Using your feminine charm will draw men to you. Once you get started, how to flirt with a guy is easy and comes naturally. Leveraging your allure magnetically attracts men. Flirting is the mechanism that lets a man know you are open to him.

This is instinctive and coded into your DNA and his. Men know the signs of a woman flirting and open to their approach without giving it a second thought.

Many of my love coaching clients, especially over 40, feel confused about flirting and why they should try it. So let me be clear what it does NOT include:

Your feminine energy is INVITING. You express your interest by looking at a guy, then looking away. And a few minute later, looking again. That is obvious enough, but it’s not AGGRESSIVE.

If you act aggressively, you’ll be taking over pursuit which is advisable for so many reasons, but the biggest one is this:

Men Want to Pursue You

A man wants talking with and pursuing you to be HIS idea. If he’s really interested, he’ll get invested in trying to win you over. THIS IS EXACTLY WHAT YOU WANT and how you can gauge his interest level. Does he make an effort?

Three examples of when a guy you just met isn’t into you enough to see you again:

1) If you smile at man and he comes over to chat, but doesn’t ask for your number, he’s not interested enough.

2) If he talks to you for an hour and laughs a lot with you, but he doesn’t get your number, he’s not interested enough.

3) If you seemed to click and had hot chemistry, but he didn’t get your number or ask you  out, he’s not interested enough.

Men who are interested will PURSUE YOU. He didn’t get your number (or call) NOT because he’s shy or wounded. When a man is genuinely interested in you, he knows what he needs to do and he will DO IT.

How to Gauge a Man’s Interest 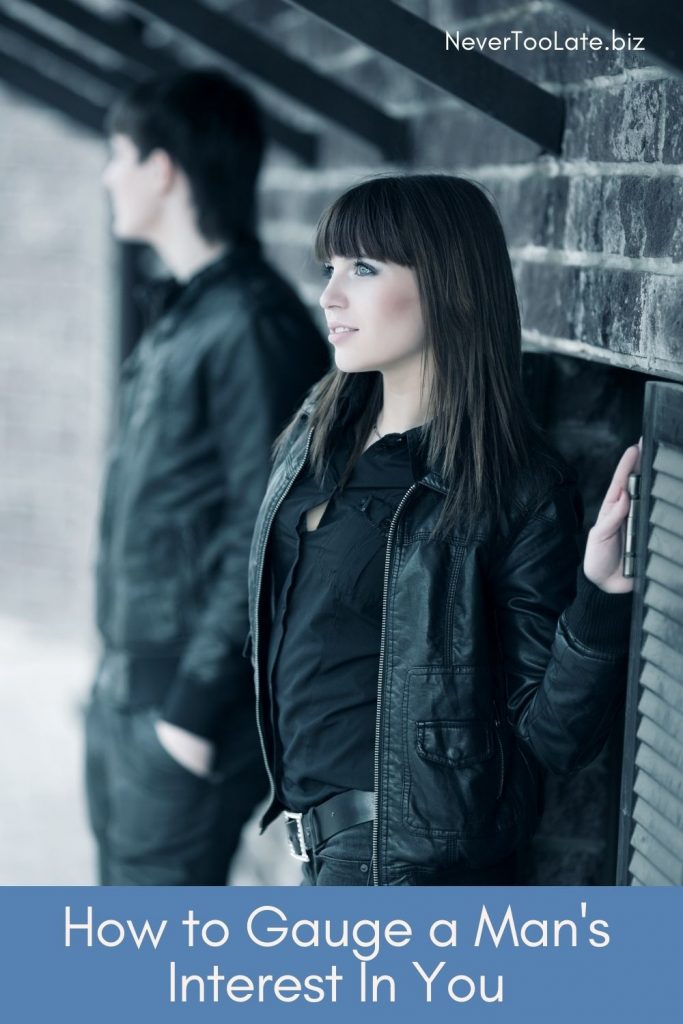 Once you learn how to flirt with a guy, then you want to know how to gauge his interest. For one thing, a man is more serious about you when he asks for your number and calls within three days. Not just texts but, CALLS and talks with you.

He also wants to see you and schedules a date with a place and time. This is a real date as opposed to, “Let’s get together this weekend. I’ll call you.” That is a man being vague to leave his options open.

A guy who is more serious will want to see you at least once a week, if not more. And he’ll stay in touch with at least one weekly call, not just text like, “Good morning sweetie, have a nice day.” This is not a sign of anything worthwhile.

Another signal of a guy’s genuine interest is when he tries to please you. For example, he takes you to an Italian restaurant because he asked what kind of food you like.

When you don’t see any of these positive signs, you are mooning over a man who unfortunately, is not serious about you.

How to Flirt with a Guy 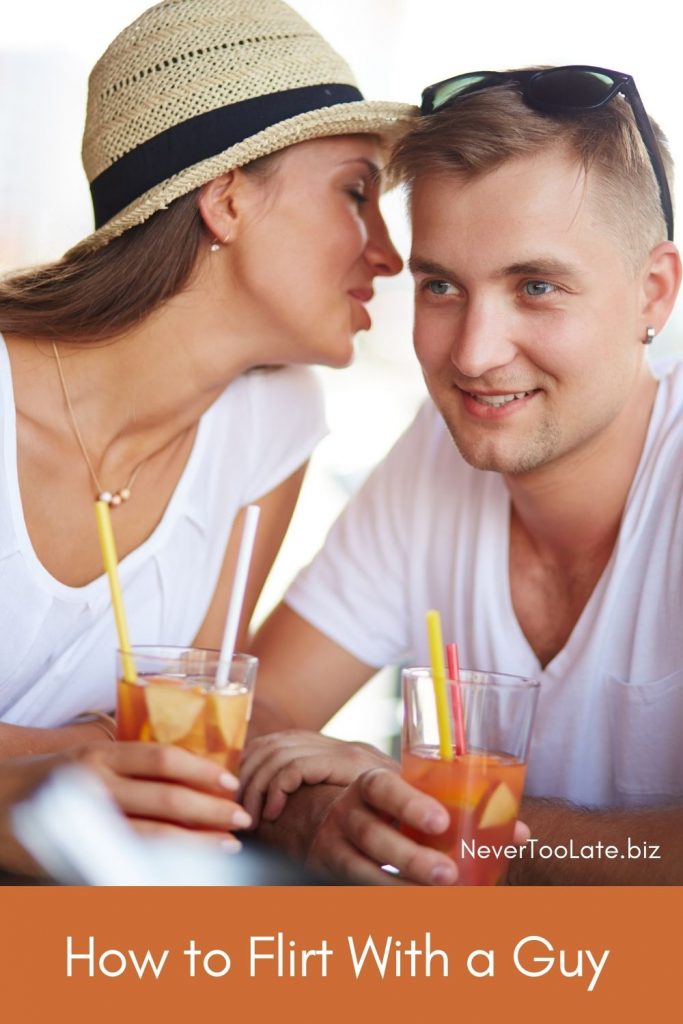 Okay, lets get back to flirting. Here are a variety of super simple, easy moves you can do to show a guy you are open to him. They might feel silly at first if you are out of practice, but that doesn’t mean they won’t work!

Once you are talking with him, these moves still work. Plus, here are two more that will deepen your connection:

All of these tips send a man clear signals from you. But don’t save all this flirting up for just the right guy. When you flirt with men regularly, it will be more natural and your skills will improve! You never know who might be noticing you so don’t hold back.

Try flirting today and start letting men know you are approachable and available. Nothing could be more worthwhile to improve your romantic opportunities than relying on your feminine charm to connect with men.

And that is how to flirt with a guy!

If you’re confused about a man sending mixed signals, get my free book His Mixed Signals Are So Confusing