How to tell if he’s playing me – This is a common worry all single women have. There are a few telltale signs to watch out for in this post so read on! 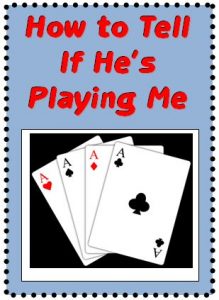 Is He Playing Me or Is He Serious?

I met this guy on a dating site and have seen each other for nearly 6 weeks. Slept together fairly soon and we have both admitted to liking each other very much. We text mostly during the week and he calls at night sometimes for 2-3 hours. We talk about everything and have sleepovers at each others house every weekend.

He comes around one week night for a visit and we usually end up sleeping together. We have been to breakfast, a few lunches and a dinner date. Yet, he’s vague about how he feels about me except he likes me “too much” whatever that means in men language.

I sometimes feel like he is playing me because he’s sending mixed signals about what he feels and wants. Other times it seems he really does like me (he cuddles me after sex, etc.)  He hasn’t said anything more or talked about being exclusive. He hasn’t said we are boyfriend and girlfriend. I’m not sure if he is just scared to admit to me how he really feels.

I’m starting to fall for him yet too scared to tell him because I really like him. The sex is amazing. I’m scared he may not feel the same way and I’ll get my heart broken (by yet another man).

Still on the Dating Site

Another thing that bothers me is that after 6 weeks he is still active on the dating site, saying that he is just clearing messages and waiting for his current subscription to run out and he won’t renew. Well we will find out in 10 days.

What do you think? Should I just ask him straight out what we are and whether he feels more for me than just liking me “too much” or are we just sex buddies who hang out like friends before and after? I do enjoy the sex and his company but I don’t want just that. I want more and if he doesn’t want the same, I’ll be heart broken.

Warning Signs of a Player

I completely understand your angst. He seems to like you, but at six weeks most men don’t declare their intentions. Even though when you are in it – this feels like a long time, in relationship terms, it’s still early. Sometimes it takes 10-12 weeks for a man to make things clear, and yet he still might not say the “L” word.

This is why dating isn’t easy. Every woman goes through a limbo period where you just can’t know what will come of things. Dating involves risk for sure.

Rejection Is a Normal Part of Dating

That’s why you cannot date if you fear rejection and heartbreak – they are  part of the territory. The solution is to build your confidence and self-respect which will get you through the rough spots when they occur.

However, you can become SMARTER about knowing what to look for and recognizing the signs of a man who might not have the best intentions.

So you ask, “How to tell if he’s playing me?” I see a few signals that are cause for concern.

You’ve been sleeping with this man for 6 weeks, but you never talked about exclusivity? Sometimes women are afraid to bring this up thinking it’s too much to ask. It’s NOT TOO MUCH. Let me encourage you to ask BEFORE sleeping with a new guy. That way you aren’t left wondering and feeling vulnerable.

Here’s how you ask. When it’s clear he wants to have sex, you can say, “I only sleep with a man when we become exclusive,” then he has a choice. Or you could be coy  and put him off by saying, “Not yet but may be soon,” because you’re not saying no exactly.  He won’t feel rejected.

Hold Off on Sleeping with a Man

Naturally this isn’t really appropriate for the first few dates which is why if you want to avoid a broken heart, hold off for a while. Wait longer – maybe date five or six. If he’s still asking you out for that many dates,  chances are he’s more serious. Not 100%, but definitely better.

If a man doesn’t want to wait,  there’s your answer – he’s not serious, he just wants to get you into bed. And if he won’t agree to exclusivity, it means the same thing. Right now, you can still tell him you want exclusivity to move forward.  Just be prepared if he doesn’t say yes to move on. No excuses or you are allowing yourself to be disrespected.

Take Your Profiles Down

Part of exclusivity is obviously not dating other women. So the profiles need to come down if you want to know he’s serious. This guy just wants to look until his subscription is over? That’s quite an excuse! How is that reasonable?

Either he wants to be with you r he’s still looking. It’s that simple. Yes in 10 days you will know for sure if he chooses to take it down or not. But that’s doesn’t mean you are exclusive until you discuss it and both agree. You need to hear the words spoken from his mouth – “Yes, we are exclusive.”

How to Ask Him to Get Off Dating Sites

Here’s a script to ask a man to get off the dating sites or apps. “Men are still contacting me online and I’m not sure what to do about it.”  This is a statement rather than asking a direct question  which avoids pressuring him so he can answer more honestly.

He might suggest you both take down the profiles and become exclusive. Or he might ask what you want to which you say, “I’d like us to both take down out profiles.” There is only one acceptable response which is “Yes” to becoming exclusive.

Do not accept a 10 day window or any reasoning for not taking the profile down, especially at 6 weeks. Will he really decide after he’s examined every other woman on the site he’s going to focus on you? I doubt it. Any reason is NOT a good sign for his long-term potential.

Warning Signs of a Player

Saying he likes you “Too Much” tells you he’s not serious. This is a warning sign of a player. What does that even mean? It’s nonsense. My bet is he doesn’t want a committed relationship. He likes the easiness of how things are going with no pressure on him at all.

Hot Chemistry Does NOT Indicate Feelings

I know this may be hard to hear, but hot chemistry is not a sign of growing feelings. This is a more primal indicator of being great sexual partners, not lasting love.

Many women confuse chemistry and feelings thinking a man couldn’t possibly make them feel so incredible in bed without having the same feelings. Sadly that’s just not true. Many men easily separate sex from feelings or commitment. So when you ask, “How to tell if he’s playing me?” you can’t base the answer on hot chemistry.

If you are not getting clear signals about how a man feels, that means he doesn’t know what he wants. Pay attention when you feel this because this tips you off you are not on the same page. Most often mixed signals indicate a man doesn’t want a committed relationship or he’s not be emotionally available.

But do not believe he’s SHY as his excuse. That is NEVER the reason a man sends mixed signals. He might prefer to be casual and he knows that’s not what you want. So he’ll take whatever he can get as long as you allow. The chances of this suddenly shifting into lasting love are super rare.

How to Tell If He’s Playing Me?

Okay, I’ve covered six areas that help you know if he’s playing you. It doesn’t look good right now. I’m not saying he’s a bad person and doing this to hurt you. I’m sure he likes you and enjoys your company. But I doubt he wants more.

You’re at the point where you might as well find out where he stands. Try the script I suggested about taking down the profiles. But, be good to yourself, keep your dignity and don’t stick with a man who won’t agree to be exclusive or take down his profile.

Don’t Ask about His Feelings

One last piece of dating advice – don’t ask him about his feelings. It’s too early and this is one of the most anguish-causing questions a woman can ask a man. You don’t need to hear him express his feelings to move forward. If he agrees to see only you, that is a positive move forward. Expressing feelings takes time and you don’t want to rush him.

If this doesn’t go forward, next time make sure you have clear boundaries with the men you date. Quality men respect a woman who values herself and  sets limits. Hold off on sleeping together for at least 5-6 dates. Be true to yourself to attract a better man who wants the same lasting love you want.