If you’re curious about how men think, especially after a great guy disappears within a month, this post will help with understanding men. 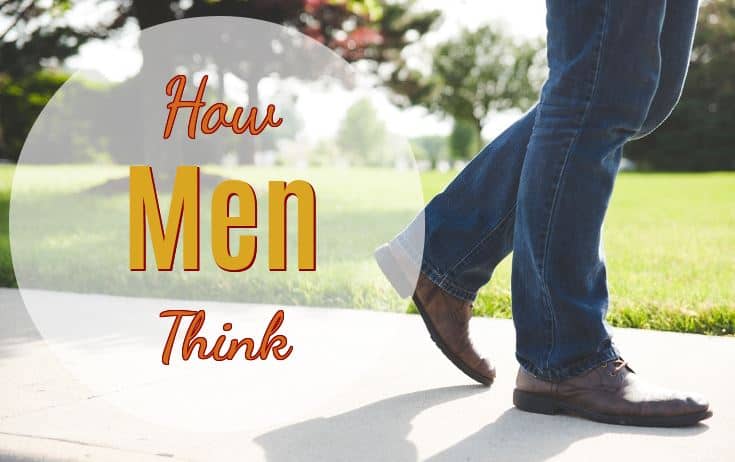 Help Me with How Men Think

I can’t believe this has happened to me! I’m a single mom, 41,  with two boys. I met this amazing man. He was like the answer to all my prayers.  He’s 44 with two kids of his own. He’s separated for almost three years, but is still legally married and has a really good job in finance.

After an amazing month together, we just broke up a couple of days ago. I met him online and talked for two weeks before our first date. We hit it off immediately. The day after our first date, he knew I was going on a date with another man and was apprehensive. So he asked me to be exclusive as he didn’t want me to dating other men and run the risk of losing me to someone else – his words.

I agreed and thought how very sweet and we both deleted our online dating profiles. Our third date was on was magical – we became official and made love. He updated his Facebook relationship status the next day and tagged me in it.

Next, he suggested we buy a house together in a few months. I was shocked that he suggested this so early but I’m not gonna lie, I liked the idea. Long story short, we were both equally excited and infatuated with each other if not more so him. He always initiated texting, phone calls and talked about going on holidays. He made lots of plans.

He often came to my house and slept over as it was easier for him. He professed how much he liked me, how he thought I was the real deal and that he’s never met anyone like me. He said we were a perfect pair and he had a really good feeling about us. I could tell he was truly infatuated  the way he made time for me and especially the way he looked at me, always in awe. We told each other, ‘I love you’.

Everything was going extremely well until the last week at the one month mark. He became little distant and his messages weren’t as exciting or endearing.  I asked him about it and told him I missed him and he said he missed me too. Then he said he felt like everything moved really fast and he felt overwhelmed and was freaking out.

I reassured him and suggested that we could give each other some space. He said the conversation caught him off guard and asked if I wanted to take a break (of course I didn’t) and I didn’t answer him, but asked him right back the exact question. He said,  “Yes.”

I felt hurt but told him I was fine with the break and hung up the phone.  I didn’t hear from him for six days, so I messaged and said we should meet to talk about what’s happening if he was free. He said he was out of town and wouldn’t be back until Tuesday. He was vague and didn’t even suggest an alternative day. So I asked if we were going to work things out. He said, “I think it’s best we leave things where they are. I’m sorry but I don’t feel we’re a good fit’.” That was the last I heard from him.

I can’t help but feel that I may have accidentally pushed him away. From what I read men withdraw and disappear because they felt overwhelmed and that guys apparently go through this emotion early on in the relationship and it’s how we women react that determine the outcome. Please give me some insight as to what you think happened and what I should do from here on in? I would very much appreciate it. Thank you in advance.

I’m so sorry to hear this has happened to you. I know this is terribly heartbreaking.

Let me start by answering this question first – Did you do anything wrong to push him away? I doubt it. You were the one who suggested taking a break, but then it became a good idea to him. Think about it. Could he really be turned off by that suggestion when he was already pulling away? You offered him space which is what men usually want when they become distant. So you actually gave him what he wanted.

If you had begged him to stick with you, that would be unappealing which is how men think. They want to avoid big emotional scenes often at all costs. But you didn’t do that. You weren’t clingy or needy. So no, you did not push him away.

Men Who Come on Strong

A man who comes on strong in a big rush to get to know you, claims you and spends time together like this fellow, love the adrenaline. They love the rush.  They love being adored,  the romance, and the rosy future they paint for themselves and the women they are with.

Then after 1-3 months, real life kicks in and they tire of what they have created. The initial rush is over and now it’s just the mundane stuff of living. So they back off, become distant or difficult. Sometimes they do rotten things in the hopes you’ll get angry and end things. Or they end the relationship themselves.

How could anyone be so smitten and then have things turn to dust in an instant? You can only come to the realization that somehow it wasn’t real.

Dating Advice for the Future

Some men are so bruised from the end of their marriage that they rush out to recreate love and know they still have “got it” with women. That’s how men think. So they are reassuring themselves of their power of attraction, but don’ really want the end result.

To slow a man down, don’t see him multiple times a week. Go slower like maybe once or twice a week at the most. When he makes plans for your future, it’s OK to tell him that you are enjoying getting to know him but want to take things slowly. Or you can say, “That’s such a nice thought, but I’m not ready right now. Let’s concentrate on getting to know each other.”

Spend time together, but other times you are going to have to say no to his invitations and be busy or unavailable. You are in charge of the timing, so don’t let another man give you the rush and then disappear.

3. No moving in for 12 months. Plans to move in before at least 8 months, if not a year, are premature. You don’t know each other well enough and haven’t seen his dark side. Everybody has one. Be smart and enjoy seeing each other without getting your living situation tangled up . If something happens, you still have your own place rather than being out on the street which could be devastating and ugly.

I hope you recover quickly and when ready, get out there to meet a man who is ready for the relationship you want. No rushing. Any man who wants to rush you should be avoided. That’s my insight on how men think.

2 thoughts on “How Men Think: Why Did He Disappear in a Month?”