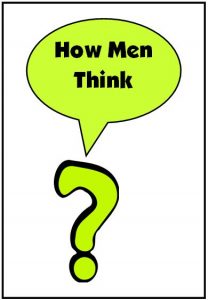 How men think is the focus on this reader’s question. Why agree to exclusivity if she’s not his girlfriend? That is confusing but I help her make sense of this man code below.

Can you help me with how men think?

I was seeing a guy for 3 months. Everything was great, we spent a lot of time together, and I could tell he really liked me. He started to get “busy” with work and would cancel a few dates but would always re-schedule. I made the huge mistake of casually asking if whether he was using work as an excuse to not see me and if it were the case I’d rather know now because I don’t want to be made a fool of.  (I didn’t say it so bluntly of course).

At the end of the conversation we agreed we were dating exclusively, because we both didn’t want to see other people. He did say that didn’t mean I wasn’t his girlfriend though (yet). I saw him once a few days after and that’s the last I’ve seen of him.  That was two months ago now!

The first 3 weeks he was still in contact, saying he’ll make it up to me when this job finishes. I began to wonder if he was losing interest or just really busy, but I trusted him so I was patient, understanding and waiting. Plus, he kept making promises to see me soon. This is why I don’t understand how men think.

The week he said his job was done, I texted him, “I am ready to celebrate when you are.” He replied the job is still going and that’s why he hasn’t called yet, but when he sees the end of the tunnel he will let me know and we can celebrate.  That was 4 weeks ago now.

I assume he is not coming back and I have restrained from contacting him. I’ve been through major emotional turmoil trying to figure what went wrong. Firstly, I know my mistake was to accidentally have the “relationship talk” way too soon, but at the time I was so confident he would commit.

I’m still analyzing that last text message. I’m hoping that one text wasn’t the icing on the cake for him not to see me anymore. I’m so embarrassed, ashamed and angry with myself for saying something. But then I think he was disappearing on me anyway and I nothing I did would have changed that.

Time was up when the job finished and he chose to disappear rather than tell me he no longer wanted to see me.  Either that or he met someone else which breaks my heart even more.  I don’t know what’s worse! Was it inevitable or did I screw it up with a silly comment that put him off? Please help me!

First – you did absolutely nothing wrong that I can tell from what you wrote. Asking him if he was avoiding you with work showed him your insecurity, but you felt that way for a reason. However, there are a number of signs that this guy wasn’t as into you as you thought which I’ll explain below.

Sign #2 – It seems to me that his purpose for agreeing to exclusivity was to keep the conversation pleasant so he could avoid an emotional scene because you only saw him once after that.  That’s another indication something was off about the relationship.

Sign #3 -The fact that he let two months go by without seeing you definitely shows he had lost interest. That was not the first sign. I say this with compassion, but your first indication was when he became too busy to see you and put you off until the end of his job. Your patience is admirable but when a man does this; it’s not about work, it’s about his not making time for you whatever his reason.

Sign #4 – When a man trades dates for texting or talking on the phone, that’s a surefire sign something is wrong. His being in virtual contact doesn’t mean anything. The real effort you want is for the man to make time to see you. If he doesn’t, he doesn’t care enough no matter what he says. A man’s actions tell you the truth about his feelings, not his words. There is no making it up – its time gone by and his talk is worthless.

Who Can Say Why He Strung You Along?
Sadly, there is no way to know for sure what men think or what motivated him to string you along. Sometimes men don’t want to be the one to breakup, so they behave badly or ignore you hoping you’ll do the dirty work for them. But you hung in there because you were still hopeful he’d turn around.

That’s why the very best thing you can do in a case like this is pay attention to a man’s actions, rather than what he says as your barometer for his true intentions. The only time it doesn’t work is if he tells you straight out he doesn’t want a relationship. Then you must take him at his word since he is actually giving you the chance to walk away. When a man says he doesn’t want a relationship or isn’t looking for anything serious, believe him. That is the ONLY TIME then what he says counts more than what he does.

Most women tend to obsess in situations like this thinking they did something wrong. But it wasn’t you – it was him. He moved on without being honest. And, if you are honest with yourself, you KNEW that was true because you asked him about it directly. He could have chosen then to be honest, but clearly he wasn’t capable of that.

My dating advice is to work on feeling better about yourself and strengthening your self esteem so you don’t put up with a man ignoring you for any reason. If the next man gets too busy to see you, wait two weeks and then walk away.

Don’t hang in there again for months hoping he’ll come back. Men like this don’t come back. Even in those “on and off again” relationships that put women through the wringer – it never works out.

When you have strong self-esteem, you realize you deserve better treatment. You deserve a man who makes time to see you because nothing can keep him away from you.