“How long should I wait for him to ask me out again?” is a common lament from single women everywhere. If you’ve been asking this question too, check out this post.

Are You Tired of Waiting for a Second Date? 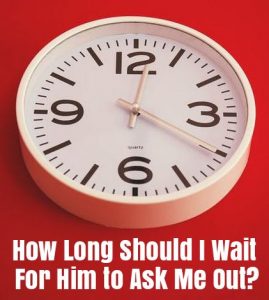 I met a guy on a seemingly more relationship-centric site. We emailed a bit and then exchanged numbers. He texted me on Monday and asked when we could get together. Unfortunately, he was out of town the upcoming weekend but said we’ll be in touch later that week to set a day and time. He texted when he got back in town (almost a week later but did what he said he’d do) and we decided to go out on the upcoming week.

The date was actually pretty great. He was a gentleman and asked me midway through the date if I wanted to hang out again. I said definitely. He has plans both days this weekend and suggested getting together next week but I’m heading out of town for 10 days on Thursday, and I won’t be back until the middle of May.

At the end of the date, he gave me a kiss and then texted to say he had a great time and to see if I got home safely. He again mentioned seeing each other again but set no firm plans. He hasn’t texted since then.

I recognize it’s only been two days but in my mind if he was really interested, he would try and hang out with me before I leave. Is that an unrealistic expectation? What’s the appropriate number of days I should give him to text before writing it off as uninterested?

Thanks for the advice!”
Waiting in Wisconsin

I’m going to answer each question in order and address somethings you didn’t even ask.

When you talk about a relationship-centric site, I’m going to point out that most women care a lot more about that then men. Some men might be more relationship ready. Others might join because they think it will be easier to get dates. But don’t think for one minute that kind of site automatically attracts men who are relationship-ready any more than other sites. It’s just hype.

Tips for Setting a Date

When a man asks you out and you aren’t free to see him, always provide an alternative time right then in the conversation. That way you don’t need to wait for him to suggest something. In this case – you won’t be free for several weeks down the road. That can be a problem, because he could lose interest, but there’s nothing much you can do about it.

You wanted to see him before you went away. Once he asked to see you again you could have suggested getting together by saying, “I’m leaving for a trip Saturday, but I do have time Thursday and Friday.” That makes it clear so he knows you want to see him and when you are free.

Keep in mind you just met him and he’s likely seeing other women. That’s probably why he’s booked for the upcoming weekend. He might not have time when you are available. This is one of the struggles of modern dating when everyone is traveling.

With only one date, he might not jump to see you again as quickly as you would like. Being realistic, it’s way too early to know that.

There’s a Shelf Life on His Interest

As I eluded to above, there is a shelf life on a man’s interest. Like a limited time offer. This is a fact and there is nothing anyone can do about it. When people travel that can permanently throw off the timing and squash the dating window of opportunity for two people.

When neither of you can schedule a date, it’s very disappointing and frustrating as well. I recommend relying on this basic truth:  He must not have been the right man or the timing would have been worked out. Using this fatalistic approach makes it easier to deal with such disappointments when they occur. Think of it as “fate” that your timing was off.

On occasion things can still work out with a guy when your travel schedules were off to begin with, but it’s pretty rare. If you’re not available when he’s in town, he can easily find another woman who is. He’s not being thoughtless, fickle or mean – it’s just a matter of supply and demand.

For this reason, I remind women to suggest an alternate meeting time during the conversation so you don’t have to wait for him to ask again another time. Just set it up while you are already discussing options. This is the best way to work around difficult schedules.

How Long Should I Wait for Him to Ask Me Out Again?

Next, you asked, “How long should I wait for him to ask me out before I write him off?” As you said, it’s only been two days. Since you’ve only had one date it might take as many as seven days and this would still be in the ball park for a decent man to respond.

After seven days his stocks goes down for sure because he’s likely not interested enough to be serious about getting to know you.

I think you should wait a few more days before you write him off. This is a place when you can give a man the benefit of the doubt.

I often tell my clients not to be too generous with the benefit of the doubt. Many women over do it hoping some day the guy will come around and become the man they dream of. That NEVER happens.

In the mean time, why not meet a few other men to keep your options open? That is the best dating strategy there is to find love with the right man for you.

If you want to learn more about understanding men and mixed signals, get my free book His Mixed Signals Are So Confusing! Find Out What He Really Means and my newsletter filled with helpful and empowering tips for women

4 thoughts on “How Long Should I Wait for Him to Ask Me Out Again?”