Home » Blog » Understanding Men » How Long Should I Wait For Him To Call Before Moving On?

You ask how long should I wait for him to call? What is the right amount of time to give a man to text or call who has stopped reaching out to you? Find out what works below. 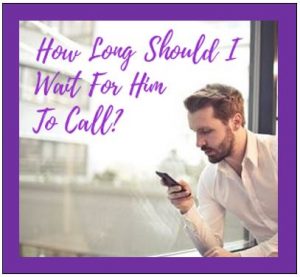 What To Do When He Stops Contacting You

I met this guy in March when I was out with friends. We hit it off instantly and I gave him my number. He didn’t use it right away. See I’m divorced and so is he, but neither of us are looking for anything serious. We met on a Saturday night and he didn’t reach out until I texted him Wednesday. Was that the wrong move for me to make?

We ended up going out on a Friday and hit it off. But, so far he has been very inconsistent. I’m always initiating contact and have seen him two more times but only if I make the first move.

Honestly, having to make the moves is driving me crazy. I asked if he really likes me and he said yes. But, he’s so inconsistent I’m getting turned off. The last time I saw him he said his daughter would be in town so I haven’t bothered him and it’s been 5 days with no contact.

For some reason I feel he’s not that interested. Should I keep texting him? I feel I should sit back and see if he texts, but how long should I wait for him to call or text before I move on?

Thanks!
Waiting in Wellington”

6 Answers to Your Dating Questions

I sense some confusion about different dating topics from your question so I will answer them one-by-one.

Let me start with how you aren’t looking for anything serious. I’m sorry to disagree, but I think you DO want more.

When a person says they aren’t looking for anything serious, this usually means something casual without commitment. But you want his attention and reach out to make it happen. That is NOT the action of a woman avoiding anything serious. You want to see him on a regular basis and that is not casual.

Be honest with yourself. You might not want to get married, but seems to me you do want to see a man on a regular basis.

Is it wrong to text a man first? Not really. The point of dating is to observe a man’s behavior. He didn’t ask you out until you texted first. That is a piece of information to notice because it is consistent with his later actions where you had to take the lead.

How long should you wait for him to call or text you first? A week maybe, but then you can decide if it’s worth texting him.

I get that you’re tired of making the first move. So, I’m curious – why do you keep doing it? When a man doesn’t step up to pursue you, he’s letting you know he is a beta man who will never step up and rather follow your lead.

Or he’s not that interested. In this case the latter seems to be true.

His inconsistency drives you crazy, but you are the one keeping this thing going. You might want to read about the Ballroom Dancing Principle of Dating which explains why it’s so much better to let the man lead for the start of dating.

4. Asking Him If He Likes You

Think about it. If you ask a man directly if he likes you, can you really imagine him saying, “No, I don’t really like you that much.” There’s no good way to answer that question without just saying “yes,” even if it’s not true.

Like I said above, to know how interested a man is, you WATCH WHAT HE DOES. Does he call you at least once a week, text every few days and take you on at least one date a week?

Not this guy – you are doing all the work and he is coming along for the ride.

Just because a man responds to your texts or requests to get together, doesn’t mean he’s really interested. He might be lonely, bored or have nothing else to do. You might be a placeholder – good enough for now until a better woman comes along.

But it sure doesn’t indicate he’s really into you. If he was – he would PURSUE YOU.

Good call! You are right about that and instinctively know this. Now, next time this happens with a guy, you’ll know better than to keep trying to make it work.

If you are trying to figure out how interested a man really is, stop reaching out to him! That’s the only way to learn if he’s really interested. Don’t do all the work – that will never turn into satisfying love.

Let him go and look for a man who SHOWS you he’s interested.

How interested can a man be if he hasn’t contacted you in five days? That’s another sign he’s not into you enough.

How Long Should I Wait for Him to Call?

I would think after a week of not reaching out and not hearing from him, he is not the right man for you. Who wants a guy that detached? Not you, I hope. No excuses are valid. Not out-of-town guests, work, or even health will do. If a man is interested, he will stay in touch, not go silent or disappear.

Letting You Down Easy

A lot of men hate to be the bearer of bad news. They resist telling you they aren’t really interested. Instead, they are passive and hope you get fed up and go away. So, while I appreciate your tenacious nature, it’s working against you here.

You Get One Shot

I understand it’s hard to wait around to see what a man will do. So, you get one chance to reach out to a guy who hasn’t started seeing you or one shot at contacting him after he stops connecting. More than that and you are at risk of keeping things alive and stressing yourself out. Don’t do it.

The final word on how long should I wait for him to call before moving on, is that you’ve already done more than your share. Stop contacting him and move on. There’s a better man out there who wants to spend time with you. Free yourself up so he can find you.

22 thoughts on “How Long Should I Wait For Him To Call Before Moving On?”