Home » Blog » Understanding Men » How He Treats You Is How He Feels About You – Yes, It’s That Simple

How he treats you is how he feels about you. Simple right? Yet, many woman struggle and make excuses for a man they’re into even though he disappoints them time and time again.

Read on to find out what you need to know about a man who doesn’t treat you the way you wanted to be treated and what you can do about it.

He Says The Right Things 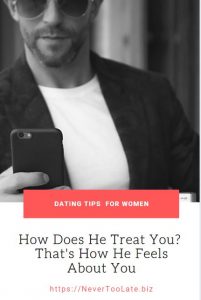 Can you relate? You are dating a guy you really like and he says all the right things. He tells you how he feels and expresses himself. What a relief after dating men who hold it all in or won’t share anything about their feelings, right?

However, there is trouble in paradise because your man doesn’t always follow through on his promises. He says he’ll call you tonight, but doesn’t until the next day. Or, he says he’ll see you this weekend, but gets too busy. He promises to take you to dinner, but cancels again.

Things just don’t add up. He seems so nice, but often disappoints you. What are you supposed to think? Even when you take the chance to bring it up, he says he’s sorry, talks his way out of it or acts like somehow it was your fault.

Here’s the worst part about the gap between what a man says and does – how he treats you is how he feels about you. Yup, that’s the bottom line. I know it’s really hard to believe. That’s because you WANT to believe the sweet talk. It’s like music to your ears, salve for your heart and feels so good.

And honestly, you can’t stand the idea that he doesn’t care enough. That he’s not capable of the kind of love you long for and deserve. So, you hold on and HOPE. You’re optimistic that he’ll do better. You hope he’ll keep his word. And you anticipate that he’ll change. 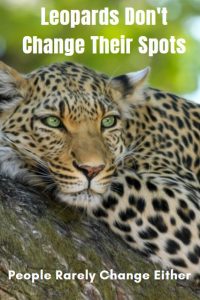 But he won’t change. A man is who he is and he can’t or he doesn’t want to try. Either way, it doesn’t really matter why does it? Nope, not one bit. The cold hard truth when you get to down to it is how he treats you is how he feels about you. So, that means HE’S NOT THE RIGHT MAN for you.

This is NOT how the man who loves you deeply would ever behave or treat you. I’m not saying he’s a bad person, but that he’s not a good match.

If this is what you are going through now, then it’s time to GET REAL. Be honest with yourself about who the man you are seeing actually is.

He might not respect you enough or keep his word.  Could be he’s the kind of guy who leaves you hanging or thinks more about himself than anyone else. Everyone doesn’t have the emotional Intelligence to treat people well or think beyond themselves.

Women always want to analyze why a man does what he does. Ultimately, none of that is the least bit important. Why is that?

Because the only thing that matters, the bottom line on if you’re with the right man or not is how he treats you. If he really cared, he’d do what it takes to make sure you are happy. But, that’s not how he behaves is it? 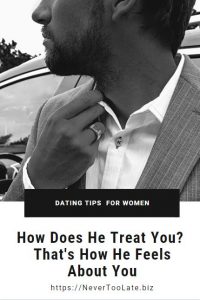 For him, he acts like everything else is more important than you. His work comes first which to some extent is understandable. Except, how much do you have to give up for his job? Will you always be last because that is not really acceptable.

Remember, how he treats you is how he feels about you. Maybe his kids come first which also makes sense to some extent. But will you ever come first?

Perhaps his hobbies, sports, his buddies or his structured way of life are his top priority. Sadly, one thing you know for sure is that his top priority IS NOT YOU. Ever.

Ouch that stings if you let yourself think about that. Don’t you deserve to come first? Of course you do!

So, what can you do?

There’s only one thing you can do – treat yourself right! What I mean is, be sure to respect and honor yourself by not accepting or tolerating poor treatment. You deserve a man who treats you very well, shows you respect and goes out of his way for you at least some of the time.

Again, how he treats you is how he feels about you. You deserve to be with a man who thinks your happiness and comfort are extremely important. A guy who actually puts in some effort, rather than constantly serving up excuses. There are no excuses for poor treatment. Don’t allow it…

What Needs To Change

Now that you are clear on the fact that how he treats you is how he feels about you, we can move on to discuss what needs to change.

Can he change? I tend to doubt it. However, if you do mean a lot to him, he might try. It’s worth a shot if you want to give it to him – tell him how he treats you is how he feels about you. Explain how you feel and what you want. Tell him you need to be a priority, he needs to keep his promises and why that matters to you.

This way you are owning your feelings and not pointing a finger at him which will just make him defensive. 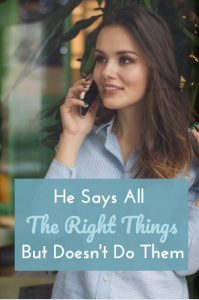 After you share how you feel, tell him what you want and make your case, be silent. Wait for him to speak at this pint and don’t say another word. See what he says in response and don’t interrupt. You’ll know everything you need to know in his response.

He may make promises you’ve heard before. Or he might surprise you with insights and a willingness to improve and make changes.

Have a time limit in mind, but do not tell him. Maybe three months or just one month to see a shift in his behavior and how he treats you. If you just let this go on into the future, nothing will ever change for you.

Keep the truth of how he treats you is how he feels about you top-of-mind. This is a strong and motivating reminder.

He doesn’t need to know or feel pressured. He’ll work on himself or he won’t, but he doesn’t get a lifetime to get it right. Not your lifetime anyway.

You need to move on to find a better match if he’s not “The One”. So, be sure to have your time limit in mind.

5. Be Prepared to Walk 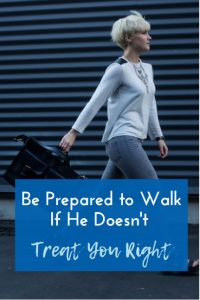 Most importantly, you must be able to walk away. Yes, you may need to leave him if you want to be treated better. There has got to be a better man and a better match out there for you in the world.

Unfortunately, if you can’t walk away, then you must accept that you’ll never be important and you are somehow OK with that.

If you stick with this guy, nothing will change. You are sure to be miserable and never feel truly loved. It will eat away at your self-esteem and impact other areas of your life. My hope is that you won’t allow this to happen.

In case you need more evidence, here 20 signs why you should let him go.

Women who make this decision to walk away, do so as a statement of self-love and preservation. They honor themselves by standing up for how they expect to be treated. Their self-esteem rises and they hold their heads high.

A wise woman knows she needs to be able to look at herself in the mirror and like who she sees.

TRUST that there is another man for you who will cherish you like no other.

Want to know more about how to get a quality guy? Listen to this free audio program here.

4 thoughts on “How He Treats You Is How He Feels About You – Yes, It’s That Simple”