Asking how to get the emotionally unavailable man? Let me fill you in on what to expect as I respond to this question from a frustrated reader. 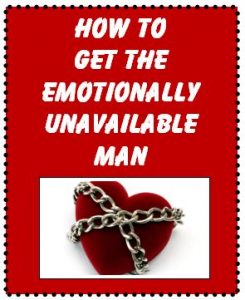 I was introduced to a man last year, he is 59 I’m 57. We had an instant spark and chemistry. He was living with someone, but they were estranged for 2 years and on the verge of splitting up. We quickly became friends and intimate on a few occasions over 3 months. Sadly, I let him go because of his situation and feeling like the “other woman”.

Six months later we hooked up again through a matchmaker friend of mine. Now four months later, he recently separated, sold their house and moved into his own place. We’ve been out socially and he phones/texts every day. We have feelings for each other but he’s guarded because of just coming out of a 20 year relationship. I understand, but I’m ready for a relationship having been on my own for many years.

The thing that bugs me is he is vague when it comes to making promises and doesn’t follow through. This is getting worse. I’ve given him space and not put pressure on him. But I feel he is giving more priority to socializing, singing in a band, work, and family than me. I’m down the pecking order.

What shall I do? I’m getting emotionally invested. Am I wasting my time with this man? Do I let him go and not have any contact so he can sort things out and to give him time until he is ready?

Thanks Ronnie,
Anxious in Alexandria”

Yes You Are Wasting Your Time

When a man has been in a 20 year relationship that just ended, he most likely wants nothing to do with getting involved in another serious relationship. He was happy to spend time with you while transitioning, but doesn’t want any expectations of him about what that means.

You got involved with him at the worst time really. Men often say they are estranged, yet still living together. This is a great excuse for cheating. They weren’t split up so you were smart and let go.

Now he’s back and finally they really have separated. Except he’s been showing you he’s still not available. How? By letting you be so low in the pecking order as you put it. When you are not his priority that says something about how he feels about  you – like everything else comes first!

Is this the kind of man you deserve? One who is self-serving and puts you last? One who has been slowly pulling away? I sure hope you don’t believe that. It’s time to stop wondering how to get the emotionally unavailable man.

What’s He Doing to Show He Cares?

Giving him more space, still being patient, letting him figure things out – none of this is about how you want to be treated. Your entire perspective is about what you can do to get him. What’s he doing to get you? Nothing from what you shared.

Sadly Love Is Not Enough

Your feelings for him are not enough to hold the two of you together when he’s not doing his part. Your love for him is not enough. You need two people with close to equal desire and love to forge a healthy relationship. You are unsatisfied or you wouldn’t have written to me. So how will you take care of yourself in this situation?

Here’s the brutal truth – he is not emotionally available. He’s living his own life of freedom and isn’t making a move to change that.  Your relationship is going downhill and will continue to do so until either he stops seeing you completely or you cut him lose.

This is what the term “ghosting” means – men disappear so you stop wanting them. Most men prefer to avoid confrontation. They don’t want to feel bad about breaking your heart or aren’t even that aware. So they do things that make the woman break up or just drift away.

Stop Wondering How to Get the Emotionally Unavailable Man

The emotionally unavailable man is just that – UNAVAILABLE! Instead of wondering how letting him go will affect him, think about how that will affect you. You’ll be free to find a better man. A man who adores you and wants to spend time with you. The kind of fella who makes you one of his top priorities.

This man right now is highly self absorbed because he’s feeling his freedom. He may never want to be in relationship again. How long are you willing to wait?

I encourage you to have the self respect to move on sooner rather than later. You’ve already been patient. Realize how emotionally unavailable he really is and know it’s time to find a decent man who is relationship ready and treats you like gold.