Home » Blog » Understanding Men » How Do I Know If He’s Playing Games?

A reader asked me, “How do I know if he’s playing games?” If you are wondering the same thing, I’m going to make it easy for you to know in this post. 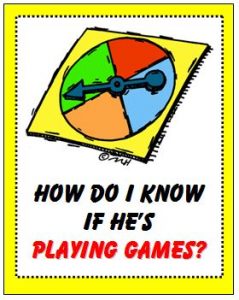 Is He Playing Games with Me?

I met a man on a dating site who seemed interested to get to know me. We both”liked” each others profiles and exchanged a couple of messages about twice a week.

Surprisingly, in all this messaging, he doesn’t ask much about me. To keep the conversation going, I always ended with a question giving him something to respond to. Lately, I noticed that he checks my profile, sees my message and then…waits a week to respond!

Recently, he said maybe we can connect one day when I am free, I told him the days I am free and he waited another week to respond, but gave me his cell asking me to talk by phone.

So, I texted him my number saying that I am looking forward to hearing from him and I told him when I was free. But, he never texted or called! But guess what- he checked my profile again! What is that about?

What should I do? ( I researched him and he is very reputable person and does not play games.)

Thanks for your help,
Dangling in Delaware”

I’m sorry to contradict you but this guy is a TOTAL GAME PLAYER! Are you kidding? This is a huge game played by many men (and yes women too) called “Stringing You Along”.

What You Need to Know about Men and Dating

The next time you meet a new guy and wonder, “How do I know if he’s playing games?” the fact that you even have to ASK let’s you know the answer. YES!

There’s a big difference between a man texting you, calling or emailing and a man who asks you out. Within the first seven days, most communication is virtual. But a man who is genuinely interested will ask you out almost always within 7 days, 10 at the most and two weeks at the very outside.

Some men have no intention of meeting you even though they show interest by constantly texting or long phone calls. These can be fun for sure, but please understand – this is NOT an indication of true interest. Only live dates demonstrate real interest and a serious intent to see if you are girlfriend material.

How Do I Know If He’s Play Games?

Here are four things this man did that prove he’s not serious:

1.No man with genuine interest would LEAVE YOU HANGING or BE SO VAGUE about getting together. He would want to meet you and watch you laugh, see you smile, and get to know you.

2. A man who really wants to get to know you would NEVER TAKE A WEEK TO RESPOND! That’s terrible! It shouldn’t take more than 24 hours, maybe 48 but that’s already showing a weakness. (That goes for the women responding to men as well.)

3. Men who are genuinely interested would never let you do all the work of holding up the entire conversation. GUYS WHO ARE SERIOUS about getting to know you, want to learn about you so they ASK YOU QUESTIONS. His not asking about you shows a total LACK of interest.

4. I hate to say this but, he’s not really interested in you. He’s USING you to BOOST his EGO. That’s what all the texting and calling is about – him,

I encourage you to let go of the idea that he’s into you. He’s NOT. He’s playing games and boosting his ego. He might be a reputable person as you say but, he’s a cruel dater.

You’d be so much better off moving on now, because he’ll drag this out until you quit and you’ll risk heartbreak over an egotistical bum.

My dating advice to you is to increase your self-worth and know your true value as a woman and a person. No decent, self-respecting woman deserves this kind of treatment.

Perhaps you haven’t dated much so you don’t know about the games men play? This is something I specialize in as a dating coach for women over 40. My bestselling book Is He the One? Find Mr. Right by Spotting Mr. Wrong reveals over 40 games men play and how to spot them quickly.

(Some women play them too and men get hurt as well.)

Time to Move On

In the future, when a man takes longer than seven days to ask you out, stop texting or talking on the phone and move on. Two weeks at the very most! Otherwise, the guy is most likely another game player who will leave you dangling and wondering.

In addition, if it takes a man several days to return a text – block him! There are no excuses for this kind of behavior except laziness or a lack of genuine interest. If a man has either quality, he’s not worthy of your precious time and good company.

You might also want to read these two posts which talk about texting and vague plans.

P.S. Ready to smarten up about dating over 40? Get my free book His Mixed Signals Are So Confusing! Find Out What He Really Means and subscribe to my newsletter to get empowering dating insights right in your inbox.

2 thoughts on “How Do I Know If He’s Playing Games?”