Learn about healing the nervous system from trauma with Stacey Webb in this week’s episode of the Breathe Love & Magic podcast. Find out how this police detective learned to release trauma from the body and use her intuition. 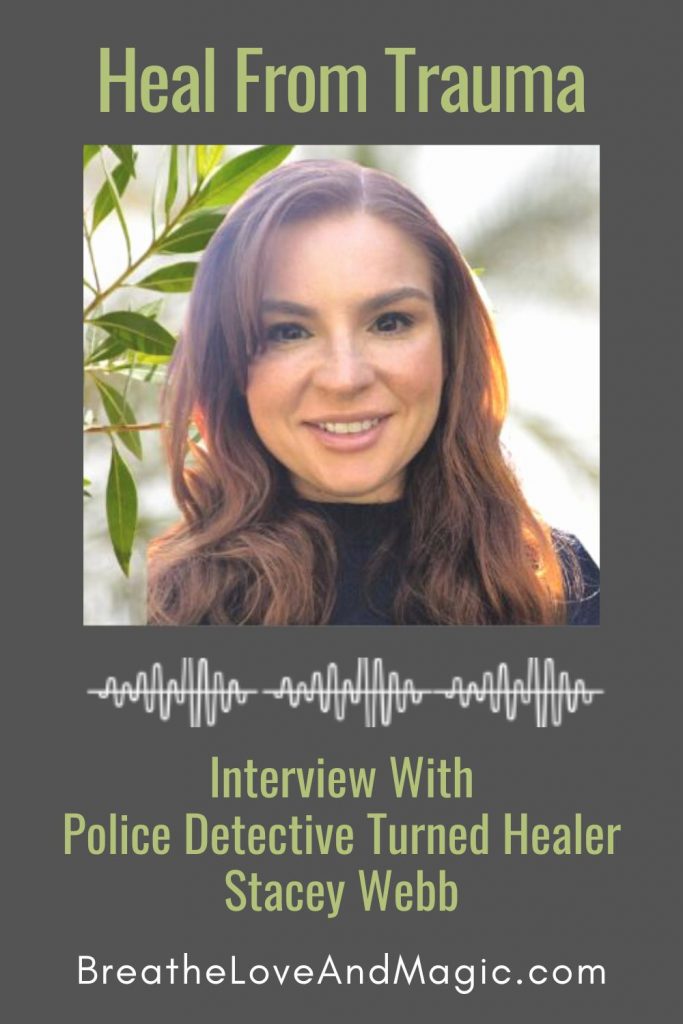 Before becoming skilled in several healing methods and starting her practice, Stacey started her career as a police detective. So, she knows a lot about trauma. She helps clients find a safe space within to release trauma from the body including using your intuition.

I began the interview by asking Stacey how she made this amazing and unique transition. She said it was a very long journey.  For 15 years as a cop, she was a police detective specializing in sexual crimes and was surrounded by people in different states of trauma.

Taking their statements could be difficult since victims often had to relive the horrific experience. That’s why Stacey wanted to learn ways to be helpful, started studying the healing nervous system from trauma, and a variety of trauma release methods.

Her hope was this would be supportive for people as she was taking their statements. Basically, she learned to create a safe space, so people could be seen and heard as they shared details of what happened.

This allowed her to get the information she needed for her investigation. She discovered her service became her “medicine” and how much she needed this work too.

Emergency Service Workers Have Trauma Too 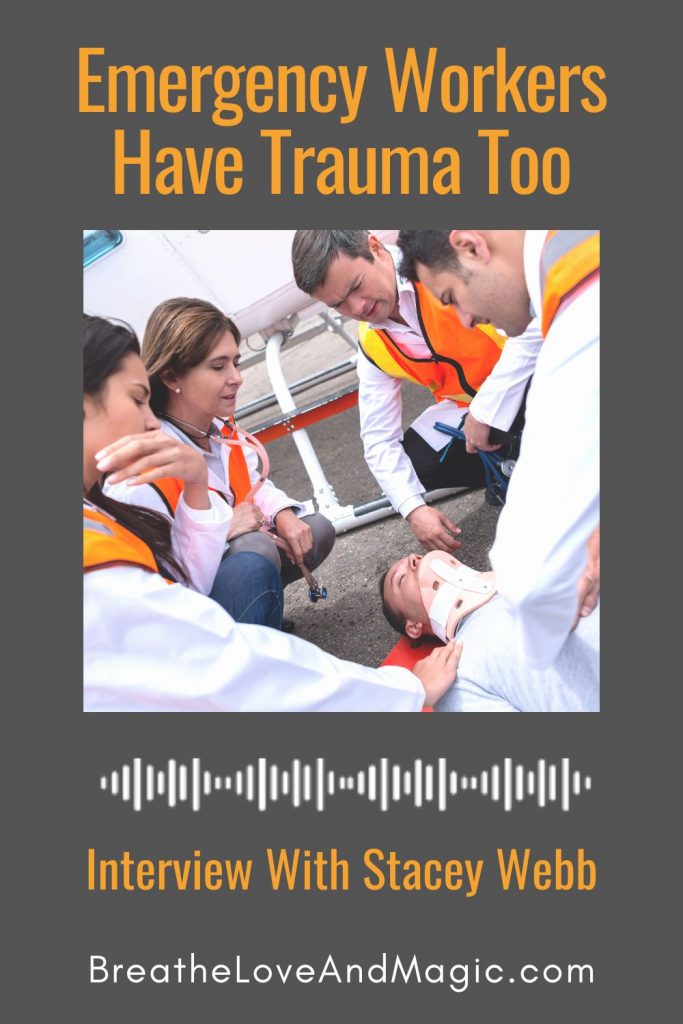 At one point, Stacey realized her colleagues also needed healing and that’s how her practice started to grow. Being a detective allowed her to help people at different stages of trauma.

In addition, Stacey wanted to break the stigma of mental health issues for her colleagues as well as other emergency service workers. Healing the nervous system from trauma is just as vital for them as for crime victims.

I was curious about people who go into this line of work and wondered how many might have been traumatized earlier in their lives. Stacey thought there was some truth to this correlation.

Trauma gets stuck in the body when people get overwhelmed and don’t allow it to process and flow out. So, it’s not surprising that emergency workers wanting to help others might come from how this mirrors something that happened in their life. 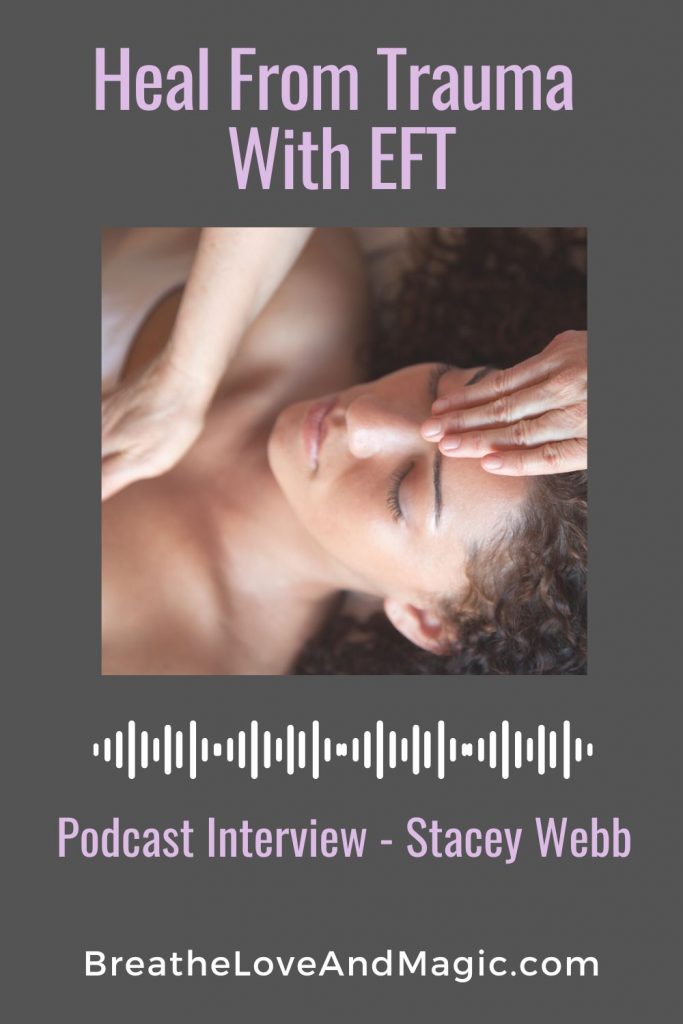 The first certification she received was in the Emotional Freedom Technique (EFT) also known as Tapping. She found this to be extremely beneficial. It’s so amazing to use your fingertips to tap on meridians and feel relief without anyone else knowing what you’re doing.

There’s also a lot of stress when presenting evidence in court, and people felt a lot calmer with the tapping while sitting there! Her work as an intuitive trauma release mentor has helped many to start healing the nervous system from trauma.

I asked Stacey how this work has impacted her intuition and other parts of her life. Interestingly, she said her intuition has definitely strengthened and she now listens to her inner guidance and follows it more.

She’s dropped some of her resistance and fear that she would be lead astray and today has a lot more trust in this guidance to know it won’t steer her wrong.

How has intuition worked in other parts of her life? Stacey had a history of being a people pleaser but has released that, as well as perfectionist tendencies.

According to Stacey, another big benefit is that this work has helped her be a better mother. For example, she often rewrote her homework as a child to make sure it was perfect, spending a lot of time redoing things. Today, she can spot this sort of thing in her children and help them let it go.

This also applies to her marriage. There was a time when her husband was under a lot of stress and would lay on the bed listening to music when he got home.

This triggered her because he was not spending much time with their four children. As a child, her own father sequestered himself in the bedroom away from the family when he was feeling stressed. Not long after that he passed away when she was only 12.

Initially, Stacey thought her husband was reacting to something she did wrong. Yet, she avoided responding from this trauma by using her skills and intuition. She asked herself empowering questions and realized she was being triggered by memories of her dad.

She dug in to better understand, feel those emotions, and let them go, healing the nervous system from trauma. After, she talked this over with her husband without blaming him, having a productive communication.

What’s important here is that Stacey allowed herself to recognize and feel those feelings, go through those layers, and then release it all!

A Deep Level Of Skill

This demonstrates that Stacey knows her stuff and is capable of separating from that internal voice which is quite empowering. It’s a much better process than simply being reactive, very impressive, and inspiring!

Her process is amazingly productive since it gives you time to understand what is happening, figure out what you need to do, what the root cause is, and then letting it all go.

Listen to this episode for more on healing within

Turn Fear Into Your Ally 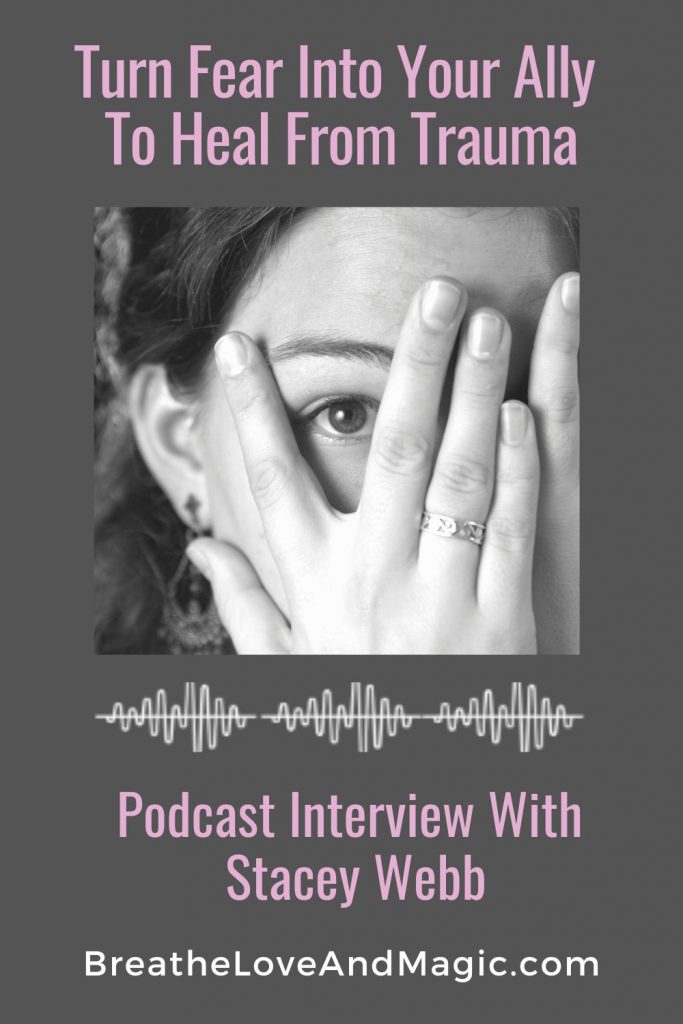 When it comes to healing the nervous system from trauma, Stacey talks about using fear as your ally. I asked her how that works. She suggests that being able to meet your fear with curiosity and love requires the ability to create a safe space within and to feel supported.

Of course, you may be scared by fears, and the emotions underneath. But if you work through all the levels, you start to release it all. While trauma is a part of life, it doesn’t need to be the driving force. That makes a huge difference.

This way you work through the emotions vs. simply react. Trauma is felt within the body. Your body reacts before your mind does in that trauma state and attaches a story to it.

So, knowing that it can be released from the body, helps the trauma response diminish. You can connect to your body more, healing the nervous system from trauma. The integration and the healing journey continue on after the session is over.

Stacey and I went on to have an eye-opening discussion about intuition, how to strengthen it and open to new ways of receiving messages. You’ll have to listen to the podcast for that part of the conversation.

Learn more about Stacey Webb, get her free journal prompts and sign up for a free circle at StaceyWebb.com.au. Be sure you use the “au” for Australia or you’ll discover a different website! 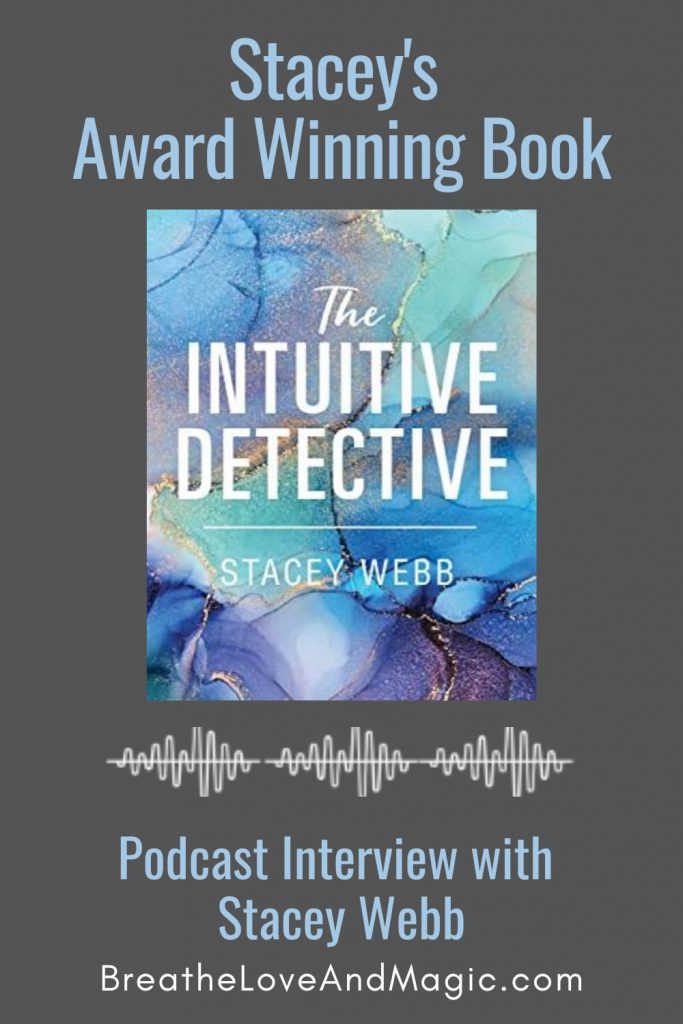 First and foremost, Stacey Webb is an imperfectly perfect human being, an Intuitive Trauma Release Mentor, Warrior of Grace and Author of The Intuitive Detective.

She is passionate about guiding and supporting people on their healing journey to release trauma, stored emotions, energy blocks, and limiting beliefs that may be creating limitations in one’s life.

Through body awareness with the breath, Emotional Freedom Technique (tapping), somatic embodiment and intuitive intelligence, Stacey helps clients reconnect with their heart, their inner child,  and their intuition through heightened awareness.

She believes that by assisting you to create safety within your nervous system and cultivate a relationship with yourself, you will be enabled to build a flexible autonomous nervous system to release fear and trauma. This allows you to step into a higher timeline and cultivate a life that is increasingly aligned and purposeful.

Stacey became a police officer with a career as a Detective for over 15 years. She dedicated her career to holding space for people who experienced trauma while investigating offense reported. She has also worked with colleagues and other emergency personal and first responders.