Is this your story? “He texts me everyday but doesn’t ask me out and I don’t know why.” What’s in it for him to keep things going for months without seeing you? 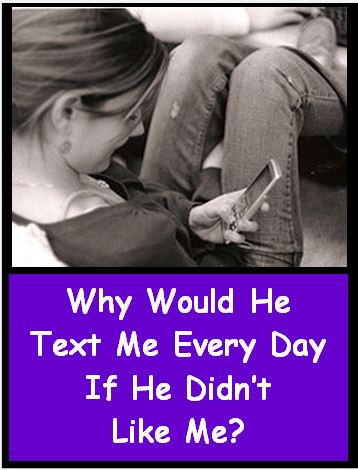 I Need to Know Why He Texts Me Everyday

I wanted to know if my situation is common. I met this guy at a coffee shop while he was on duty as he was a police officer and the first month or two – I allowed him to take lead and initiate meeting up or hanging out. I didn’t take it seriously because he was newly divorced. Our conversations via text were flirtatious and he would compliment me a lot. During the first month he asked to see me but last minute (if he was patrolling the area near me, he’d say “I am in your area today or Coffee sounds good right now.”

Finally, he initiated a real “date” after 6 weeks texting message and meeting last minute a few times. Conversations became more serious as he started to share about his life. He texted every single day and I mirrored him. Month 3, he suggested hanging out but planned in advance and the days leading up to this he kept asking if I was excited to see him because he was excited to see me. I clarified that I didn’t want something casual and he agreed. However, the same pattern of daily texting continued.

In the 4th month of daily texting, the conversations became repetitive and I did not want a virtual relationship – so I decided to plan for us to see each other and that’s when his true intentions became clear as he never responded and disappeared. I guess I just want to know, within this 4 month almost 5 month period, what satisfaction does he get or any guy get from getting to know someone via text message – is it because they want their ego stroked? Is it to string someone along to potentially get one thing from them? And what could have I done better to call him out?  I would love your insight.

Thanks!
Texting in Tulsa”

Yes your situation is extremely common but I am more than happy to explain what is going on and how you can avoid this kind of thing in the future.

“He Texts Me Everyday” is for Stringing You Along
Today there are a lot of singles who participate in these lengthy texting relationships that last for months. These situations do not transform into lasting love. It’s not how long a guy keeps texting you or what he says in those texts that let you know he’s genuinely interested in you. What matters is the action he takes to spend time with you in person and get to know you.

Stringing You Along Is About His Ego, Not Sex
If this man wanted sex, he wouldn’t wait months to see you again. Most men who just want sex rush things to conquer you within a week’s time or faster. Then they move on to the next woman and conquest.

What Is the Satisfaction for Men? “He Texts Me Everyday” to Feed His Fantasy
Any man who says he’s in the area but doesn’t schedule regular dates, especially on the weekend after a couple of meetings is probably cheating. The cheaters feel that texting and meeting up without sex is somehow not really cheating. But it sure does build egos and feed their need for variety. You gave him something to fantasize about and he let you know that as he was leading up to seeing him, but then it never happened. He kept saying how excited he was and wanted to know that you felt the same way – Pure Fantasy!

Calling a Man Out on His Game
I don’t advise calling men out – that can lead to fights and tough situations as the man feels attacked or loses face. Don’t go there. The best thing to do is tell him what you want or even walk away. At any point in the beginning you could have said, “Let’s get together this week” and if he put you off, then you should have moved on.

I always say a woman can ask a man out one time only. Then it’s up to him to continue pursuit. If you ask more than once you are chasing him which never works.

How to Avoid Texting Relationships
When a man doesn’t have time to see you after 7-10 days, stop texting and move on. Yes, make it that quick and simple. Otherwise you leave yourself open to falling for a man who has no intention of ever building a true relationship. Women find love in the sweet things men text and say, but true love shows in a man’s actions. This guy had no action, just cheap talk and no follow through.

I hope this helps explain what happened and how to not get involved this way again. If you catch yourself asking why he texts me everyday with a new guy, I hope this comes back to mind.

Be confident and know that a man who is serious about getting to know you will do what it takes to see you face-to-face. Use that confidence to walk away from losers and men who string you along. Say it with me now, “Never again!”