So, he texts but doesn’t ask me out? Women tell me they’ve been “talking” to a guy for a while which means you’ve literally been talking, texting, video chatting or emailing, but NOT dating. 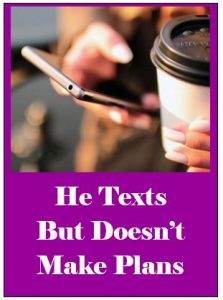 How to Get Past Texting

Texting and maybe even a few phone calls can be a lot of fun as you get to know a man. Yet, that’s not enough!

He’s got to take that important next step to ask you out if you are going to have a genuine relationship-not a virtual one.

What’s this behavior about anyway?

If he texts but doesn’t make plans, nothing can be more annoying. You click with this guy you met online, go back and forth for a while, but never meet him!

The texting is fun, and you feel like you’ve made a connection. That’s why it doesn’t make sense and you wonder if he’s maybe too…

You simply have no idea what the problem is. And this keeps happening, which explains why it’s getting under your skin and driving you crazy!

You’ve asked your girlfriends what they think and get differing opinions. No one seems to know for sure.

You might have asked a guy friend why he texts but doesn’t make plans, but that didn’t help you get a clear answer either.

How to Go from “Talking” to Dating

Once and for all you just want to understand – how can you go from “talking” to dating that man?

Now, I’m not a fan of being forward or asking men out. What works best even today in this modern world of dating is to let men pursue you.

That’s the ONLY WAY you’ll know if a guy likes you.

When you ask a man out more than once, you have no way of knowing if he’s going along for the ride because you’re good enough for now.

Like a placeholder until he finds someone better. Another reason is that he might just be bored – yuck.

Or, maybe he goes out with you because he really IS interested. Impossible to tell the difference, right? How can you know for sure?

One thing I know for sure, you CAN’T KNOW if you do the asking. That’s why I recommend never asking a man out more than once. Never.

Fewer Men Are Taking That Step

For some reason, there has been a noticeable shift. Fewer men are taking that all-important first step – getting past “talking” and asking women out.

You can’t imagine how many emails I get from women like you who complain about how he texts but doesn’t make dates.

It’s not due to his shyness. You don’t intimidate him, although I know that’s a popular theory among single women, especially the successful ones.

Many midlife men today have been crushed by women, rejected countless times or hurt and deeply wounded. So they hang back wanting to MAKE SURE you really like them.

It’s sad really. So, this is the ONE TIME it’s OK to take matters into your own hands.

There are a few essential and simple parameters that will help you know exactly what to say and do.

If you stick to the script I provide below, don’t veer off or try this more than once with the same guy, you’ll be good to go.

Here’s What to Say to Set a Date

If you’re on the phone with him, (since you don’t meet men without speaking to them first, right?) the call is coming to a close and he hasn’t said anything about getting together, try this:

Say, “It’s been fun talking to you. Why don’t we get a cup of coffee (glass of wine/beer) and see if there’s any chemistry?”

Then, don’t say another word, no matter how long the pause is. This way you’ll get a feel for what he’s thinking. There are a few different ways this could go:

1. If he takes a long time to respond

that’s not a good sign. He probably wasn’t going to ever ask you out anyway. Just wrap it up, say goodbye and look for another man. You don’t need anyone taking up your time for no reason. He had his shot, he blew it, move on. And do NOT look back.

like he has to look at his calendar or check with his ex or whatever. Excuses are not a good sign either.

At least you know he’s not genuinely interested, so again, let him go and move on. Do NOT keep chatting and texting hoping he’ll want to date you someday.

Don’t stop there! This is your next line, “Great, when are you thinking?” This engages him in the process of setting up the date.

Don’t get off the phone without a plan. That means a day, time and place. If you end the call without a plan, you may never have one.

If he chooses a day you aren’t free, no problem. Just say, “That’s not good for me, what about Thursday at 7?”

Always provide an alternative even if you have to negotiate to time further, so you have a plan.

He Texts But Doesn’t Ask Me Out?

Now you know how to go from talking to dating that man! Don’t let his reluctance to make a plan drag on into the future.

This is how you find out his true interest level. A lot of men just want to communicate, but not meet. Spending time in this noncommittal way somehow builds his ego or soothes his soul. Women are compassionate listeners and empathetic friends.

However, the last thing you want to do is pour your heart and soul into supporting some guy who seems nice, hoping he’ll come to love you and date you.

In fact, don’t trade anything for love.

Women through the ages have traded sex hoping for love or cooked meals cleaned his house and more.

This is not how to get a man to love you. He has to WANT you and a relationship for this to come true. You can’t lure him into it or change him to get his love.

If he doesn’t want a relationship – that’s it, case closed.

Why support a man emotionally without meeting him or having dates? It might be somewhat satisfying, and you’ll FEEL like you’re in a relationship even though there are no hugs or kisses.

BUT YOU’RE NOT IN ONE. It’s virtual, not REAL.

Either get him out on a date or say, “Bye-bye.” Block him if you have to because you are serious about finding love.

You don’t let men waste your time or wrap you around a little finger to be at his beck and call in case someday he agrees to meet.

If You’re Serious About Finding Love

When you are serious about finding love, you value yourself and your time. Knowing you are worthy of more than “talking,” you don’t get stuck when he texts but doesn’t make plans.

You make tough decisions like cutting off a talker/texter and blocking him because you know you DESERVE MORE.

The WHOLE ENCHILADA is what you want, and you won’t settle for anything less than a real, passionate, face-to-face relationship for an epic love that lasts and grows.

Having Trouble Finding a Decent Man?

Now, if you are having trouble FINDING a man you WANT to have coffee with, we should talk. Sometimes women have trouble getting dates and if this is happening to you, you are NOT alone.

Always asking yourself why he texts but doesn’t ask me out? This problem is more common than you can imagine. But together we can change that.

Why continue to be left out of finding love and the man of your dreams?