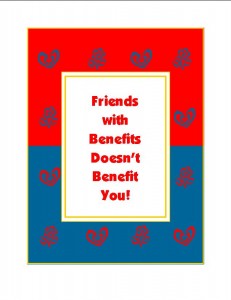 Are you in a friends with benefits relationship?
Read on to learn what to do.

I need dating advice badly. My ex of 2 years ago started hanging out with me again. At first we were both in relationships and just walked at the same park for 8 months now. We have always hugged and flirted, but recently we were both single and he invited me over one day. We became friends with benefits. It’s been 5 times this past month.

We don’t just have sex – we watch TV, cuddle and he made me breakfast. After we spend a night together, he gets distant for days or we just see each other at the park and act like friends. A few weeks ago I told him that I am in love with him and have been for the past 4 years since we dated. He said it was a lot to take in, he didn’t no what to say and he’d reply later. But he never did. He never brings it up either.

Sometimes I ask him to hang out and we shoot pool, but a lot of times when i ask him, he has some reason why he can’t. He never invites me when he goes out somewhere. but will invite me to hangout sometimes. I feel like i am just never good enough for him. If I was he would make me is girlfriend right? I still love him but he’s not my boyfriend and I don’t know how he feels about me because he never said.

Another guy asked me out tonight to see a band. Should I go out with this other guy? What should i do about the man I love? Should I tell him I have a date tonight if he asks me to go walking or should i just say I am going out? I love him, it hurts. I’m so happy when I’m with him and still get butterflies after 4 years.

Please help me with your dating advice,
Patsy

My heart goes out to you because I know this is hard but I’m going to give you my dating advice straight. He is not in love with you and he doesn’t have to say it. Read between the lines – he said he didn’t know what to say when you told him he loves you. That IS an answer because he didn’t say he loved you too. He doesn’t ask you out, only to come over for sex, even though other activities are included.

He cares, but not enough to consider you his girlfriend. Hanging out and friends with benefits are both signs of casual-only relationships and nothing more. He doesn’t love you which makes him the wrong man for you, regardless of how you feel about him. Love takes two. Please let go and move on because your ex is the only one getting benefits – you are getting your heart broken and allowing him to do it.

Another man asked you out? GO! Don’t bother trying to make your ex jealous-that’s a game you won’t win. Go out with the new guy and look for other men to date until you find the right one for you.