Wondering, “Does he like me?” That’s your first clue he’s probably not serious about you. Here’s my dating advice to this reader having this very problem. 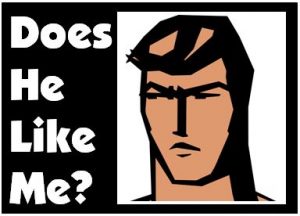 I’m confused about a fella I’m in touch with the past few months. He told me he liked me over a year ago and wanted to be with me even though I was going out with a friend of his. Just before Christmas my relationship broke up not because of the friend but we just weren’t getting on.

When we broke up, his friend asked me out for a drink. I didn’t because it was way too quick after breaking up -three weeks. Later I agreed to meet him, we went out and had a great night. We met another night again and things were great. Over the last month we talked nearly every day. But when it comes near the weekend, he asks have I any plans and neither of us have.

Two weeks in a row I asked him if he wanted to do something on the Sunday and he said he would if he wasn’t busy. Sunday evening came and got a call or text saying he wouldn’t be able to make it. He was busy at home and it would be late when he’d finish up his work.

What do you suggest I do? I really like him and I’, wondering does he like me? I think he has interest or he wouldn’t be ringing 5 -7 times a week or texting.

You ask, “Does he like me?” but the real question is would a man who likes you act this way? This man is stringing you along. If he wanted a long-term relationship, he’d want to see you on the weekends. In fact, his behavior makes me wonder if he has another woman or why wouldn’t he spend time with you over the weekend.

He is clearly non-committal because he won’t even agree to see you when you ask him out. He says he’ll see if he’s busy. Never put up with that kind of evasive response. . Either he wants to see you or not. Then he conveniently responds Sunday night when the weekend is over saying he’s busy. Don’t believe it! He is busy – with another woman or avoiding you. Either way, that’s not how a man in love behaves.

When a man calls several times a week to talk, he’s looking for emotional support. Women often feel this has meaning and assume he must be interested. Why else would he spend so much time ringing? Well, he could be…

Women fall for his attention via telephone (or text or email) hoping he will eventually love them and become the available man they want. That never happens. Either a man is available or he isn’t. But men don’t change their ways and become suddenly available or the man of your dreams. Men who are truly interested, don’t leave you hanging or wondering, “Does he like me?”

This kind of “relationship” is a waste of your precious time.

There are two ways you can handle this.

So, in answer to the question of, “Does he like me?” my advice is that this is not the man for you. You want a man who wants to spend face-to-face time with you. Quality time doing fun things. Sharing life and kisses. You can’t do any of that by phone.

6 thoughts on “Does He Like Me? He Calls, But Doesn’t Make Dates”