Home » Blog » Understanding Men » Dating Tips for Women- I Asked Him Out and He Said No!

He flirted with you but never asked you out? My dating tips for women recommend enjoying the flirting, but not to take it seriously. This gal asked a man out who flirted with her and here’s what happened

Get Dating Tips for Women 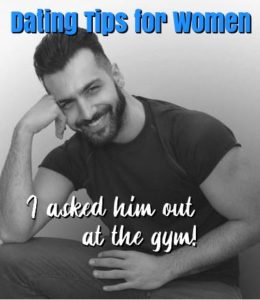 I feel like such a fool. I have been talking with this guy at the gym. He  trains when I am there and a couple of months ago we had our first chat, talking about how we both had kids. A few days later, he asked what my husband thought of me being at the gym a lot. I said I was a single mum which is why I thought he was keen on me.

As the weeks passed we’ve chatted a lot and he asked me questions about myself, job, life and what days I go to the gym. One day I disappeared talking to some friends and he came looking for me! Then, I wondered why he doesn’t ask for my phone number or ask me out? Maybe he thinks I am not into him?

I Asked Him Out!

This is why I’m hoping for some of your dating tips for women. Today, when I saw him in the gym, I casually suggested he come to see me where I work to have a drink some time. I was disappointed with his answer, as he says he isn’t drinking at the moment. Then we carried on talking in general.

I feel like such a fool that I asked him out. Even if he isn’t drinking, he could have still gone out with me. I really thought he liked me. He gave me so many signs like asking if I was single and going out of his way to say hello. Now I feel like a big fool and of course I will be seeing him every time I go to the gym.

Why Did He Show Interest?

I don’t understand why he was showing all the signs of liking me, but when it came down to arranging a date he turned me down. What your view is on this?

Thanks for your help and all your great dating tips for women,
Stuck at the Gym with Him”

I understand how confusing and frustrating this kind of things is. He certainly did show all the signs, except the most important one – he never took the step to ask you out.

Taking matters into your own hands wasn’t such a bad idea. He seemed into you, so I totally get why you suggested a drink. Who knows why he didn’t offer an alternative. That makes me think he is seeing someone or doesn’t feel ready to date right now for whatever reason.

Nothing Wrong with Asking Once

You took a chance because he wasn’t making the move.  Even though he said no, so what? No big deal. You have nothing to be embarrassed about! He’s the one who had been chasing you around the gym and then bowed out when the opportunity to see you was offered. One of my dating tips fro women is to let things go rather than waste time fretting.

What to Do Next

You can stay away from him at the gym or change the time you workout. Another options is to continue talking to him if that’s still enjoyable. You know the score now – he’s not going to ask you out on a date. So, the choice is yours.

The best thing about what you did is that you only asked him once. Sometimes women continue to ask, never allowing the man to initiate and then complain about that later. This situation does give you some insight into what men go through asking women out doesn’t it? Rejection isn’t fun for anyone.

Don’t Be Hard on Yourself

I think you were brave. In the future, if a man starts flirting with you but two weeks go by and no dates, make yourself scarce. I’m not saying this will make him step up – but at least you won’t be building up hope that a man’s flirting actually means something.

My dating tips for women explain how the hardest part about an experience like this is understanding that a man can find you attractive and flirt with you, but still not want to date you. Sometimes the flirting is all he wanted to feel good about himself, boost his ego or pass the time. Flirting can be a lot of fun!

So if some guy flirts with you all the time, but never asks you out, don’t attach meaning to his interactions. You can still flirt with him, just don’t think it’s going to lead anywhere.

4 thoughts on “Dating Tips for Women- I Asked Him Out and He Said No!”