If you’re dating a widower, you may have found one of the best partners for a long-lasting, loving relationship. A widower didn’t go through the pain of breaking up a marriage and divorce, so he doesn’t have that kind of emotional baggage. In fact statistically speaking, widowers are the most likely people to marry again.

Men who were married and still loved their wife, usually want to find that kind of romantic partnership again. They like having a woman around and sharing their life. Most widowers aren’t afraid of commitment either – they enjoy it. So, there are many wonderful aspects of dating a widower.

However, if you are questioning his readiness for a relationship, that is another story and something to be vigilant about. There are many horrors of dating a widower. Even the most amazing man, who has not completed the grieving process, needs to be off limits or you will regret getting involved.

Thankfully, you have nothing to worry about as long as you see these seven signs that let you know he is READY.

Dating a Widower Who Is Not Ready 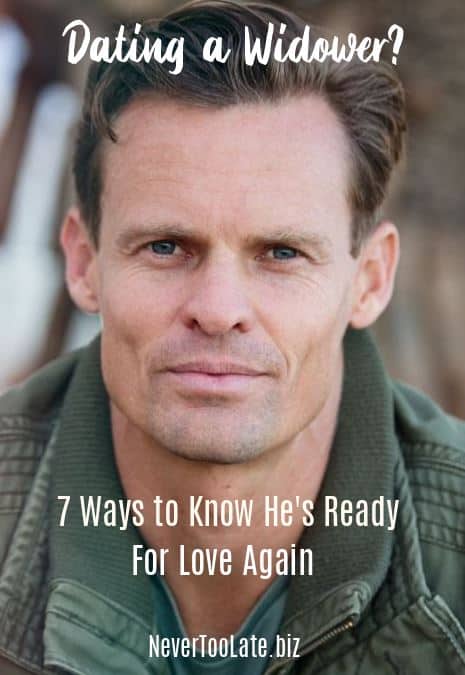 While you may have some trepidation about dating a widower, most seek love again more quickly than widows, usually after one year vs. as long as five years on average for women. However, you really want to steer clear for a full year.

On the other hand, there are a number of serious concerns if his grieving is still going on. That’s why you want to know if he’s ready for a new relationship or just feeling lonely and filling time with you.

The last thing you want to do is “help” him get over his deceased wife. This requires extensive emotional support on a topic that will cut through your heart – his love for another woman. You cannot compete with the dead.

Helping a widower is misguided because what you are really doing is hoping he’ll recover quickly and ignoring the obvious fact that he’s not ready for the real thing with you.

All your good intentions in this case to ease his pain and connect with him will simply lead to devastating heartbreak.

The Horrors of Dating a Widower

If he exhibits signs that he’s not ready, and you are serious about finding lasting love, then you are barking up the wrong tree, as the saying goes. Please don’t do this to yourself! You’ll find a list of the red flags about dating a widower towards the end of this article.

The horrors of dating a widower are notorious. From being hidden from his family, keeping the relationship a secret, sneaking around and more. This is a surefire way to completely lose your dignity and ruin your self-esteem.

You are better off leaving and starting over with a new man who is READY.  Nothing is worse than hanging in there waiting for some guy to get over his wife.

You’ll be thinking, “If only he could focus on how good WE ARE together.” If he could, he would.

7 Signs of Readiness for Dating a Widower 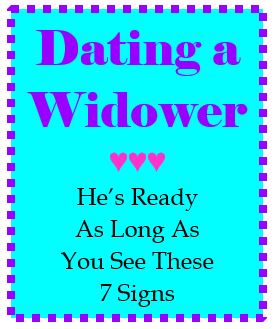 What are the good signs to watch for? If you are enjoying a widower’s company and see these seven signs, he’s probably ready for the lasting love you want.

Most widowers will get back out there to date and hopefully find a new partner after about a year.

This is the average period of grieving for most men. And statistically, these men are the most likely to marry again. Yay!

2. His Actions and Words Match

When the guy you’re dating says something and then follows through, this is always a good sign.

But it’s even more meaningful when you’re dating a widower. This shows he’s ready for a relationship because a man’s actions are what matter most. Talk is easy, but actions show a man’s true intentions.

This is actually true for any man you date, of course. You want someone who you can count on and whose word is like gold.

When you encounter a man who walks his talk, you are dating a man who has integrity. Some men talk a good game, but if they don’t deliver on that, what’s the point?

If he can’t follow through, take care of yourself and your heart, be smart and walk away.

3. He Doesn’t Talk About Her Constantly

A widower who is not ready constantly talks about his wife. Everything brings up a memory of something special about her or an aspect he misses.

You cannot win against a fond memory, so don’t even try. His wife now has been placed on a pedestal and you, even though sitting right next to him, cannot compare. He’s simply not ready to date you or any woman seriously.

If he brings her up once in a while and doesn’t wax on too long, that is normal, something to be expected and hopefully isn’t hard to tolerate.

Should you be offended by his talking about his wife, then he’s not the right man for you. If he was happily married for many years, he’s going to talk about her to some degree and might feel wistful on her birthday or anniversary. 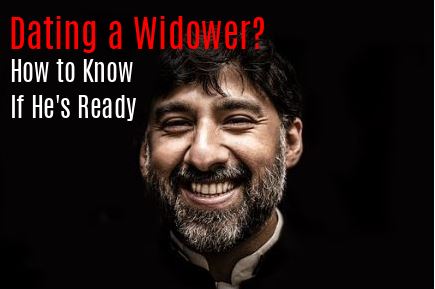 It’s understandable that after many years of marriage with a woman he loved, his deceased wife will be in photos.

A few here or there makes sense and is expected. However, if he’s got her picture by his bedside and all over the house like a shrine, this is a major RED FLAG.

He’s still deeply grieving and not ready for a relationship with you. Don’t ignore this about dating a widower, thinking you can simply talk him into putting those photos away.

They are a statement about where he is in his healing process which cannot be hurried, no matter how well you get along or how much he seems to like you.

One of my clients just told me how a man on the Bumble dating app reached out to her. Out of six photos, half of them included his wife! Talk about the horrors of dating a widower!

She liked him and wanted to know what I thought. I told her NO WAY. I can’t even imagine what this man was thinking, can you? This is a true story!

5. He Pursues You Consistently

As with any man, you want him to pursue you consistently. This means he calls you weekly, takes you on a date at least once a week if not more, and texts in between (if he’s a texter).

When dating a widower, this is particularly important. Should he see you sporadically to have some female company, get emotional support or avoid feeling lonely.

Once you see a man weekly and your time together becomes more frequent, this is a really good sign for sure. Keep in mind, consistency builds a relationship.

So, if his contact or dates are more sporadic, he’s probably more casual than you think and not serious about you or finding love perhaps.

Dating a Widower Over 50 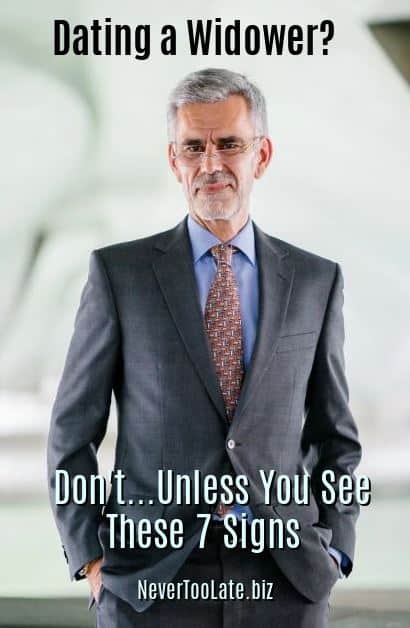 6. Introduces You to Family

When you are dating a widower of any age, if he’s extremely concerned about not upsetting his family with you, he’s not ready to date.

You want to be with a man who is confident in himself, his actions and his choices. A man who fears what his family will think about you or his dating, is not standing on his own two feet.

Don’t think that everything will be alright once they see how great you are together. Trust me, that is not what they will think.

In a case like this, the family (including children, parents or in-laws) is concerned with preserving the status quo and the loving memory of his wife.

You cannot win if there’s any competition with her ghost – you WILL lose.

7. Introduces You to Friends and Family

Another great sign of a man’s genuine interest and readiness is when he starts introducing you to the people who matter most in his life.

Once you start meeting friends, and family members in particular, then you know you are on a good track.

Understand that with the children, especially if they are young, it may take longer.

This makes sense in the case of dating a widower or a man who is divorced. Most men (and women) want to know you will likely be around long-term before you meet the kids.

Warning Signs and Horrors of Dating a Widower

To sum up the warning signs, if it’s been less than a year since his wife passed and he talks about your future together, but never follows through, he is not be ready.

If he talks about his wife constantly, still has tons of photos of her even on Facebook, is inconsistent with his attention, please rethink dating him.

And, if he expresses concern about what his family might say, or doesn’t introduce you to anyone, keep in mind these are serious red flags, letting you know dating this widower is probably not a wise choice.

Sometimes widowers want to keep your relationship a secret, will tell some family members but not others or not introduce you to his friends. Things must be out in the open or you are witnessing the horrors of dating a widower.

Only he can decide when he’s healed and ready for a serious, lasting relationship with a new woman.

Don’t invest your time and life in helping him recover. This is a thankless job and will lead to heartbreak. As soon as a man feels better and more emotionally whole, he will usually walk away and find another woman to commit to.

Why is that? It seems so rotten and heartless. When a man is not at his best, he can’t really give you what you want. He might really care for and appreciate you, but he could also be leaning on you. And after he recovers, then you remind him of the time when he was weak and recovering. So, he moves on.

You will not win him over by nursing him back to emotional health.

The Good News About Widowers 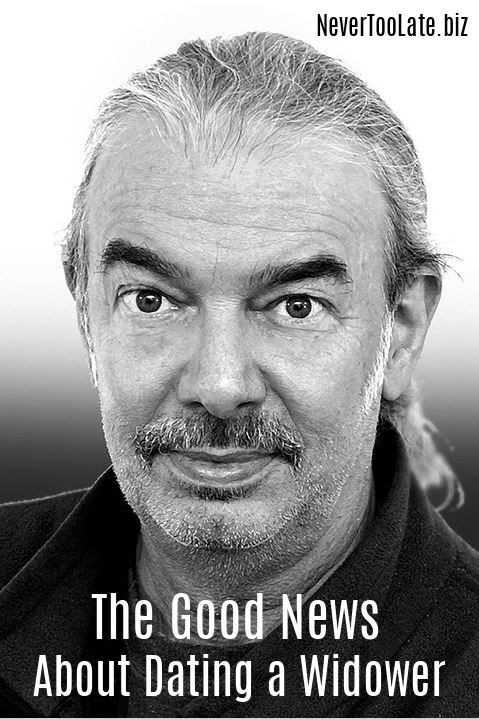 Now, the good news is that a widower knows how to love and usually wants to marry again.

He’s not phobic about commitment and likes having a woman in his life. So, if you are dating a widower who is showing all the good signs outlined in this post – excellent!

Enjoy this time with your new man and take things slowly to be sure you are both making good choices. There’s no need to rush. Taking your time allows you to savor every joyous moment.

If you want more dating advice tailored to you and your circumstances, let’s chat! Schedule a complimentary session with me and fill out the short application to discover what might be blocking you from finding love and if coaching is right for you.

86 thoughts on “Dating A Widower? He’s Ready As Long As You See These 7 Signs”