Are you chronically attracted to emotionally unavailable men? You’re not alone! Find out how you can get past this devastating bad habit that is keeping you single. 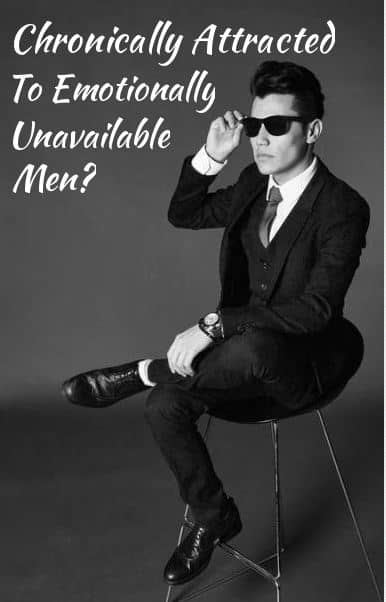 The Curse of Emotionally Unavailable Men

Why is it that every man you meet seems to be emotionally unavailable? How is that even possible, right? You appear to be a veritable magnet for this kind of guy and it’s starting to really bug you.

There are two places to investigate about this chronic problem – the emotionally unavailable man. First, let’s really look deeply into how to spot this more quickly in the met you meet. The faster you know who you are dealing with, the faster you can drop him and move on.

1. He’s Attracted to You

You’re no fool and can tell when a man is clearly attracted to you. That’s not the problem. The truth is his attraction has nothing to do with wanting a relationship with you. men completely separate sex and relationships and are pros at sleeping with you without any attachment or feelings. You know this right?

So, why do you immediately assume that his attraction is proof he’s seriously interested in dating you? Yes, he might take you on a couple of dates, but that still doesn’t mean he wants a  lasting relationship. What it does mean is he wants to hop in the sack with you and nothing more.

What does this mean if you frequently mistake his attraction for his desire a relationship? You’ll be heartbroken repeatedly.

What can you do? Stop assuming these two things are in any way related. They are not. For most men, attraction does not leap ahead to love and relationship. Only women think like that.

2. He Says One Thing, Does Another

You’re seeing this guy and he says all the right things. It’s pretty amazing. You’ve longed to hear a man tell you how wonderful you are, how beautiful and smart. He just knows what to say that makes you feel great.

Funny thing though, he doesn’t have time to see you. If you’re dating a man who talks about getting together, but rarely sets a date or cancels often, he’s not into you. When it comes to understanding men, what matters most is what he does to spend time with you. He is all talk, and no action.  That means, he’s not attached to you and is emotionally unavailable. But, he’s keeping you on the hook in case he wants a little loving.

3. He Doesn’t Want a Relationship

One of the biggest, easiest telltale signs of the emotionally unavailable man is he comes right out and tells you. “I’m not looking for a relationship. I’m not ready for a relationship. I just got out of a relationship and need space.” What trips up a lot of single gals is that he’ll add this to the end of the sentence, “But let’s see what happens.”

My clients have told me they thought this was perfectly fine because the women didn’t know what they wanted either. So not true! You know you don’t want a casual relationship based on sex. but you fall for this hook line and sinker. You ‘re not sure he’s the one – you just met. So, you figure “We’ll see” means you’ll both watch how thing develop and it could lead to a relationship. That is so WRONG.

When a man comes right out and tells you he doesn’t want a relationship, that’s a man being honest and up front! That’s not a “we’ll see” sort of thing because he knows what he wants and a relationship is NOT it. Which he said out loud directly to you. Don’t listen to all the sweet talk which is usually manipulative. But when he says anything to push you away, that’s when you PAY ATTENTION.

4. Crumbs Won’t Get You the Cake 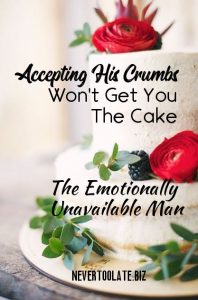 Sometimes women are so anxious to get a relationship going with a man they think is a great catch that they accept the crumbs he’ll offer. Coffee on a weekend during the day. A rare date on a week night. Late night calls and asking to come over to talk.

It’s not that he’s too busy or not a good planner, but he simply doesn’t respect you enough to treat you the way you deserve. He’s not that interested in you, but you help him get his needs met. You’re sweet, or thoughtful, do some much for him, or always drop what you are doing to make yourself available in his moment of need. CRUMBS!

He Stops Making An Effort

Once you let him know you’ll take whatever you can get of him (crumbs) he’ll never put forth any effort again. Here are think you are being patient, understanding and nice. But really, you’re being a doormat for this crummy guy. That’s no way to get the whole cake  – the relationship you want from him.

He’ll say sweet things to smooth things over if you complain and you’ll believe him. But he’s just like all the other emotionally unavailable men. Happy to take what you’ll give. He doesn’t need to earn you as his woman and so over time, he just loses all interest. A crumb receptor is not a challenge or very exciting either.

Did you ever hear the therapy joke about a light bulb? Here’s how it goes: “How many therapists does it take to change a light bulb? Just one, but the light bulb has to want to change.”

That’s right – that great guy who is like all the other emotionally unavailable men has to want to change and then HE has to make the change. You can’t help him.

Projects Are Work, Not Love

What do you need some broken guy for? You don’t! You want a man who is relationship ready right now, not someday in the future. A project guy might sound like fun if you like to fix things. But he’ll break your heart for one of two reasons.

1) He tries, but never changes no matter how much you help him and you finally give up.

2) He goes to therapy and makes the change with your support. Then he dumps you and marries the next woman. I know you’ve heard this story many times about the super supportive woman who gets left behind.

Don’t do this to yourself. You deserve love with a healthy and available man!

There are a number of other signs the man you’re seeing could be emotionally unavailable including: 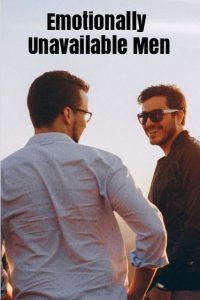 If you are serious about finding love, your best bet is to simply avoid the emotionally unavailable men pattern. As soon as you get the slightest inkling that he’s unavailable, walk away. Forget how much time you invested or how handsome or successful he is. If you want true love, he’ll never deliver.

It’s not that he’s mean or a bad person, he’s simply not capable. He doesn’t have the emotional IQ that you need to make him a worthy partner. The reason doesn’t matter either. Once you know this about a man, move on as quickly as possible.

Time to Look Within

Dating in midlife means you’ve had plenty of dating experience and if you fear rejection and being hurt again, you might be a bit less open then you think. This is worth looking at and then working on. When your heart is open, you will attract a higher caliber man. One who is open and ready for lasting love and a life-long romantic partnership.

Ready to find the right guy for lasting love? Check out my Free Masterclass called 5 Astonishingly Simple Ways to Find “The One“