Discover an easy way to have better conversations in this episode of the Breathe Love & Magic podcast. I’m speaking with Diana Indries, creator of the sensational game called Better Topics, helping couples improve their relationship.

Creation of the Better Topics Game 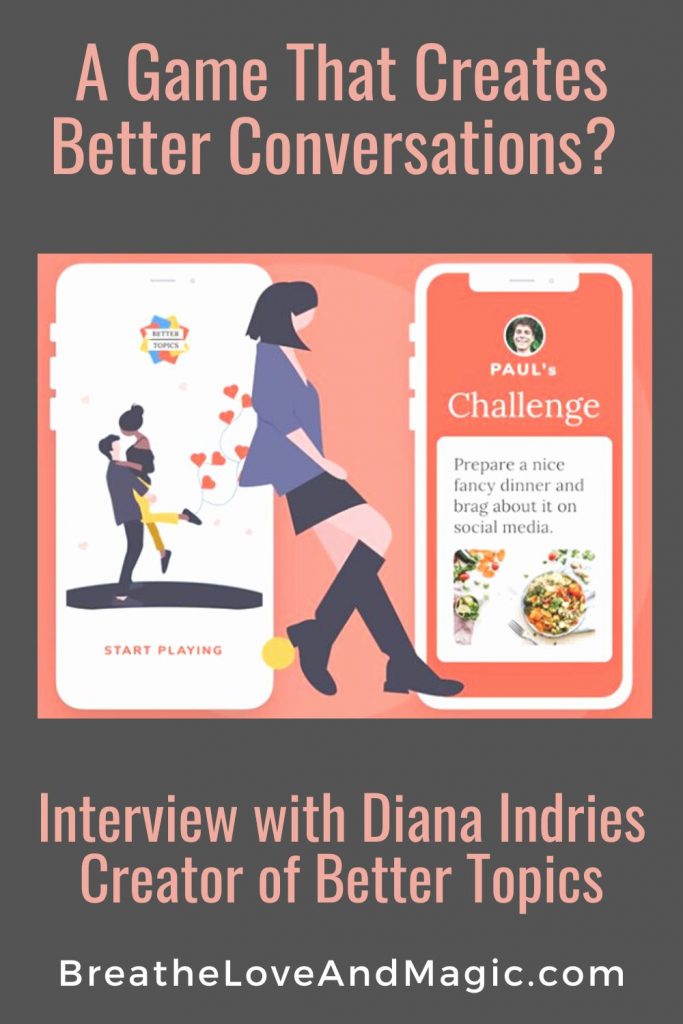 I asked Diana how she came up with the idea of this game, Better Topics, to help couples improve their conversations. Turns out this was created because she and her husband needed it themselves.

Both of them love card and board games and often play on date night. That’s how the idea came to combine improving their relationship with the fun of a game. They tried many other existing games, and were frustrated with these options.

Other games weren’t helpful for creating a deeper conversation, so they thought of developing their own. Together they considered the types of questions that would work, and also how to make it an actual game that is fun to play and can be used more than once.

Diana said that most people are not used to opening up or talking about their feelings. In her own relationship, she was the one who tended to hold back. When she would get frustrated, she would shut down, stomp around, slam doors, etc. and not talk to her husband.

Diana’s husband would ask how he could do things differently to not upset her in the future. She’d tell him to leave her alone because she didn’t want to talk about it. She was punishing him in a way.

He said they could not continue this way and encouraged her to open up and talk to him so they could work it out. Diana has discovered that the vast majority of couples don’t know how to talk things through in a productive way. 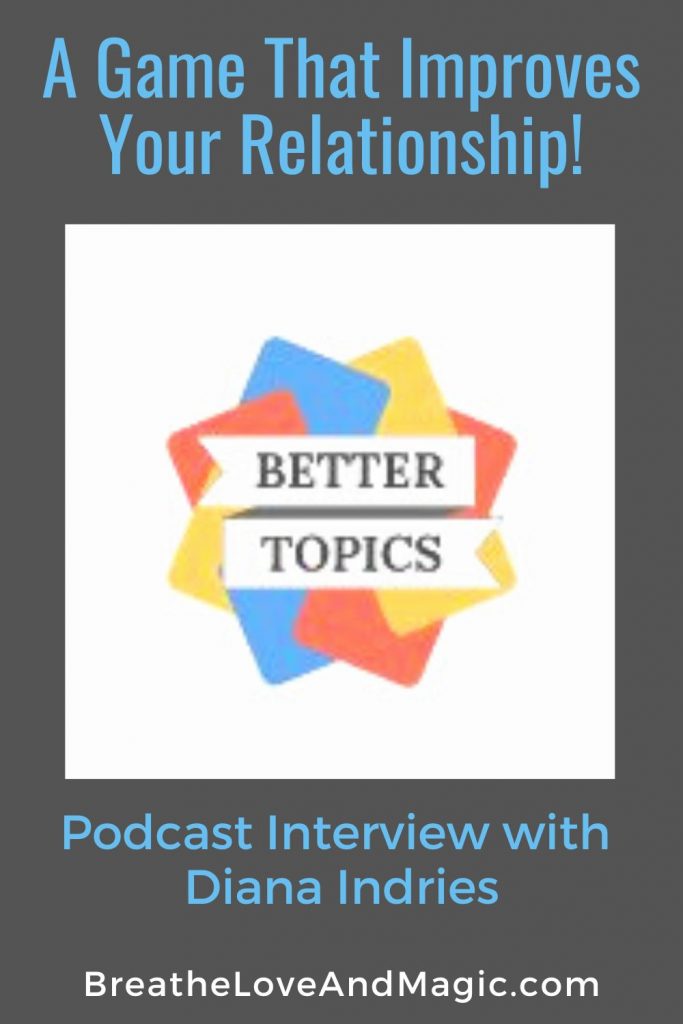 In playing a game, you are more relaxed, so people are more willing to express themselves. It also feels like a judgement-free-zone, making it easier to be more honest because it’s a game and not in the heat of an argument.

Questions are a mix of deep topics and lighter ones. Making these inquiries helps you learn when to be there for your partner as you get to know them more in-depth. Plus, you and your partner will feel heard and acknowledged. That alone can deepen your connection.

This goes hand in hand with the different love languages. The game helps you pay attention to what makes your partner feel loved, because everyone is not the same.

The game makes communicating easier because not everyone is willing to read books, articles, or go to therapy to learn what you need to know to improve your relationship.

Making the game fun and repeatable was brilliant! It comes as a card game or an app.

The feedback has been mind-blowing and heart-warming at the same time. One man wanted to play with his wife but she was not interested. So, he memorized some of the questions and brought them up during dinner. This worked and she started to open up.

Diana realized they were helping people all over the world to start having better conversations and get to know each other as well.

One couple who used the game to provide her with feedback, already had a strong, long-term marriage. They thought they didn’t need the game but tried it anyway.

Their feedback was surprising because while they thought their communication was excellent, the cards brought up some interesting topics for discussion. Turns out even some families have used the cards with their children (removing  cards that were not appropriate).

How Diana Met Her Husband

Diana’s story of how she met her husband was pretty magical in itself. You’ll have to listen to learn about that. She used the Law of Attraction and as it turns out, so did her husband!

How the Pandemic Created Success

In 202o, with the pandemic, the timing couldn’t have been more perfect for this game. Couples were stuck in the house and with each other. There’s only so much TV watching that can be done. People needed to start talking to each other, which is why the game was well positioned for success.

Get your own game from Diana’s website and use this Discount code [Magic10] or on Amazon. 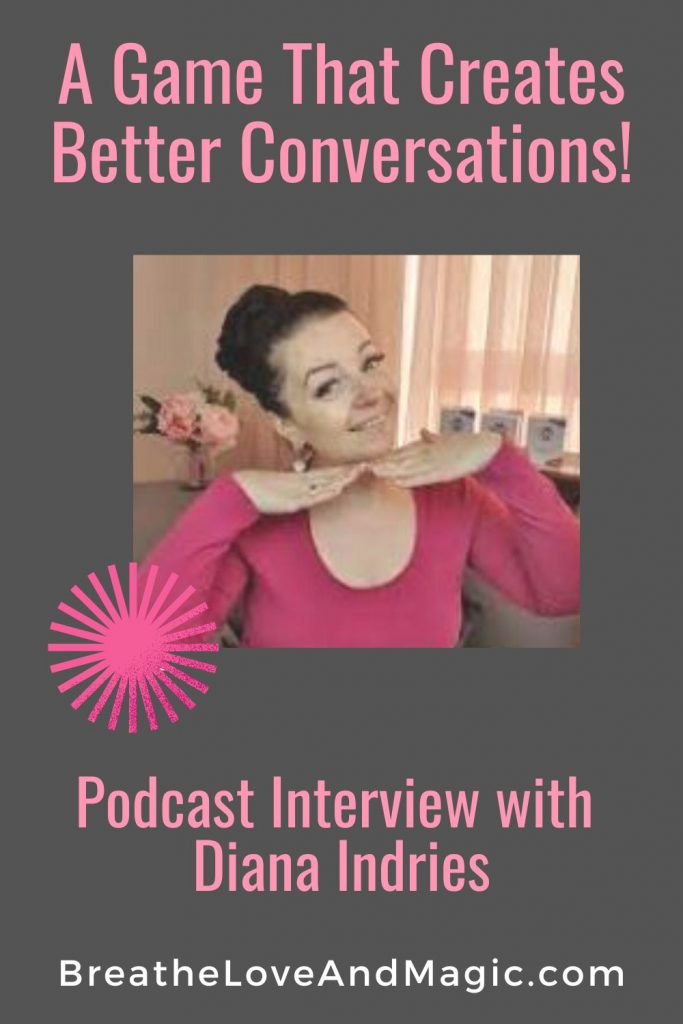 Diana Indries was a Manager in the corporate world of NHS (National Health System)  the UK to Creator  and is now the creator and CEO of Better Topics.

She has helped thousands of couples in over 170 different countries improve their relationship and communicate more effectively while still having fun by playing the Better Topics Game for Couples.

This is a game that encourages couples to have those much-needed deep conversations, but with the fun and light-heartedness of a game. The best part is that Better Topics is a repeatable game, so couples can play this over and over again.

The game also won the Innovative Gaming Product of the Year 2021/22 at the Central England Prestige Awards.