Breaking up is never easy. How do you let him go? You struggle with making this terrible choice. Here are 20 indications your relationship is over.

When Is It Time to Breakup? 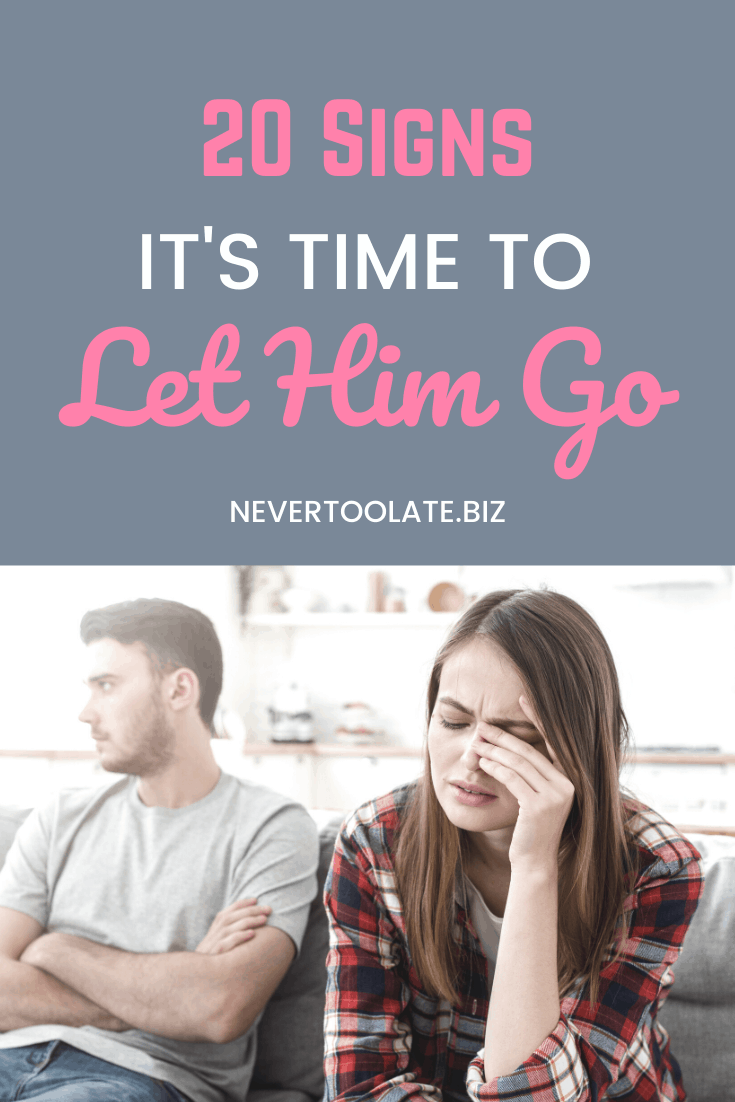 But, how do you know if you are making the right decision? You maybe doubt yourself wondering if there is a way to fix things. Maybe you’ve already tried everything you could think of to repair your relationship. Sadly, nothing is working.

Sometimes you get stuck hoping somehow, some way he’ll revert back to the man you once adored. What happened to him and where did he go? Perhaps he no longer resembles the guy you first dated.

Did he change? Did you?

Check out this list of 20 signs that let you know your relationship is on the rocks. And, if you spot more than one, it’s time to let him go and move on.

1. He Doesn’t Keep His Promises

If your man tells you something he’s going to do or agrees to something and then doesn’t do it, that lets you know he’s no longer interested in keeping you happy. If this isn’t new for him, maybe he never was concerned about more than himself.

You need your partner to have integrity and be a man of his word or it’s time to let him go. Don’t accept anything less.

2. He Doesn’t Spend Enough Time with You 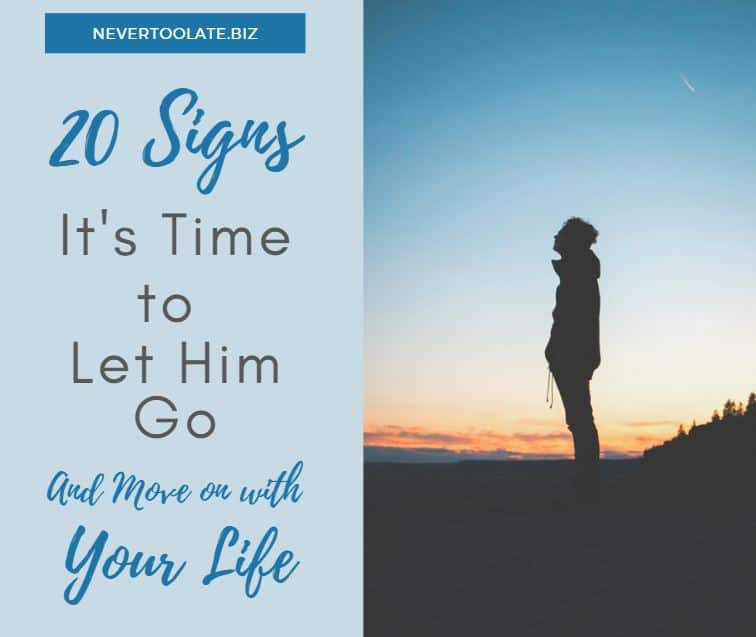 He’s a super busy man with a lot on his plate. Since things started, he’s been spending less and less time with you. There is always a reason why he can’t come over or get together, leaving you lonely and disappointed. How can a person be lonely in a relationship? Now you know.

You want a man who wants to spend time with you and finds a way to stay close.

(This can also be a sign that he’s using you and connecting only when he needs something.)

3. He Has Other Priorities

Maybe he was clear from the start that he had other priorities that would need to come first. You thought things would improve the longer you were together but that didn’t happen. Could be his kids, his career, his fitness routine, his elderly parents. Whatever it is – the fact that you are not his first priority is very clear.

Even if you can’t be #1 all the time, for a healthy relationship you must be a major priority a good chunk of the time. This is not something negotiable so it’s time to let him go.

This goes without saying even if you love him, you have to love yourself first. So, if you are with an abusive man – any kind of abuse, it’s time to put yourself first and keep yourself safe.

Love was never meant to be like this. Let him go. You deserve to be loved, cherished and treated like gold.

5. He’s Prone to Bursts of Anger

You’ll be going along nicely and everything seems fine. Then, out of nowhere he blows up at you. You’ve been noticing he’s prone to bursts of anger and this becomes very unpleasant. You start walking on eggshells since you aren’t quite certain what might set him off.

Anyone can have a bad day and get angry. But when it starts to impinge on your life, you’ll need to evaluate if there’s enough good to put up with this sort of thing. Almost always, like 9.9 out of 10 times, the answer is “No, not worth it!”

6. He Won’t Discuss the Relationship

You’ve tried but he will not discuss the relationship He won’t talk about the future or a problem you’re having right now. How can you work things out when he won’t talk to you about anything? You can’t – it’s not possible.

A good man who truly loves you wants to work things through and is willing to talk about what is happening. Nothing less is acceptable.

His comments to you are rude and show you a lack of respect He doesn’t accept you for who you are, expects you to change for him or treats you poorly in front of others. This is not the loving, healthy relationship you always dreamed of!

You deserve better than to be disrespected so maybe it’s time to let him go.

8. His Way or the Highway

There’s no negotiating with this man. You have tried everything and it’s his way or the highway. This means your needs are not going to be met if they differ from his. And this is not something that will ever change.

Be real and recognize this is who your man is. Since there is no hope for compromise, how can you continue seeing him and putting your own needs on the back burner? This is not healthy so think about if it’s time to let him go.

9. He Communicates Less and Less

The funny thing about your sweetheart is that he used to want to text and talk all the time. But that has sure slowed down. dwindling away, you sometimes are left wondering when you’ll hear from him again. and, that is a telltale sign a man has lost interest.

10. He Disappears Without Explanation

Normally your guy lets you know where he is and what is going on. But lately, he has disappeared a few times without a word. No explanation at all. You may have asked him where he went but he sort of brushed it off and changed the subject.

This is definitely suspicious behavior – the disappearing and brushing off your inquiry. Not how you want the man you love to respond to you. 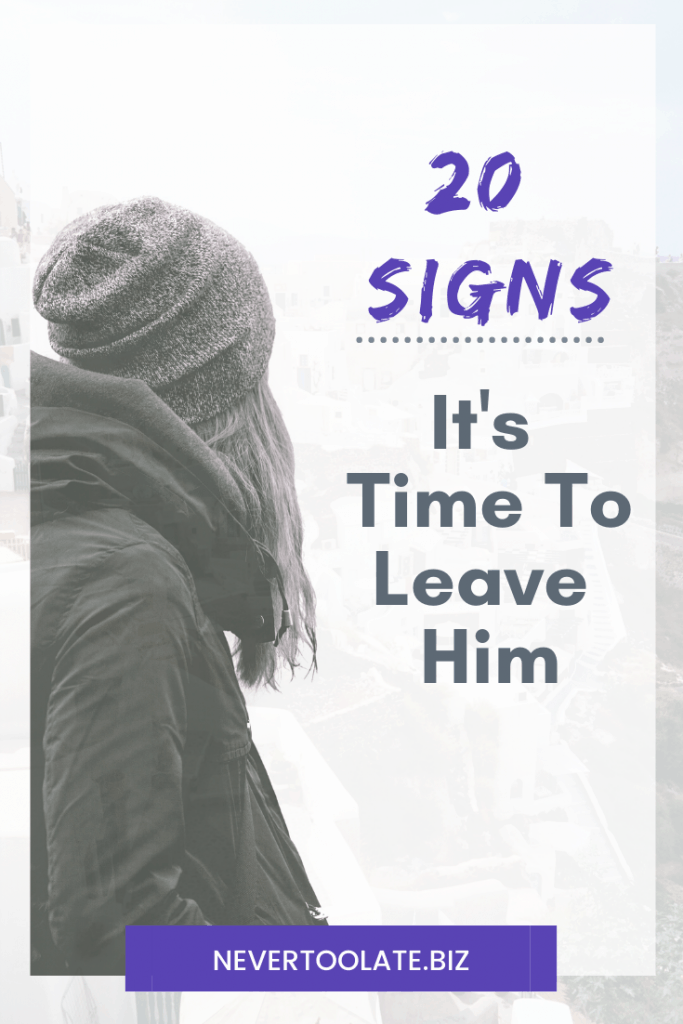 You knew something was up and when you asked him about it his response conflicted with another piece of information you had. Then BAM you realized – you’ve caught him in a lie! When you catch your man lying that is not a good sign.

Anyone can make a mistake but if this sign gets added up with several others, then it’s time to let him go.

12. He’s Hiding His Phone from You

Most of the time your partner never cared about you seeing his phone. He’d leave it lying around the house unattended and didn’t care if you looked at it. Now, things have changed and he seems to be actually hiding his phone from you.

He might keep it in his pocket or go into the bathroom to talk. This is dubious at best and a likely sign he’s cheating. You may need to walk away and end the relationship. Keep your eyes and ears open.

Normally your man is reliable and for the most part you know his routine. When he gets up, goes to work, works out and comes home. But for some reason lately, things have changed. Maybe he’s working late a lot or working out more.

This is not always a bad sign but be smart and if you start to notice other suspicious signs, pay attention!

You always hear about how the woman is the one with the headaches and excuses not to have sex. Yet, the man you’re with is never in the mood anymore. His desire seems to have vanished and that’s a surprising shift. He used to be into it, so what gives?

For a number of reasons, you just don’t trust your guy anymore. This makes you sad and is really stressing you out. It’s hard to live this way.

You need a love you can trust come hell or high water. Unfortunately, he no longer fits this description so this is a big justification to end the relationship and breakup.

16. He Compromises Your Core Values

Just by being with this man, you are compromising your core values. He’s not really doing this – you are allowing your values to be impacted by him This might be harmless like political differences. Yet you know you can’t live with such a gap between your belief systems.

Or, he might be involved in sketchy or illegal situations that make you seriously nervous and you feel are wrong for you. If this feels like your relationship LET HIM GO NOW! The longer you wait, the worse this will get. 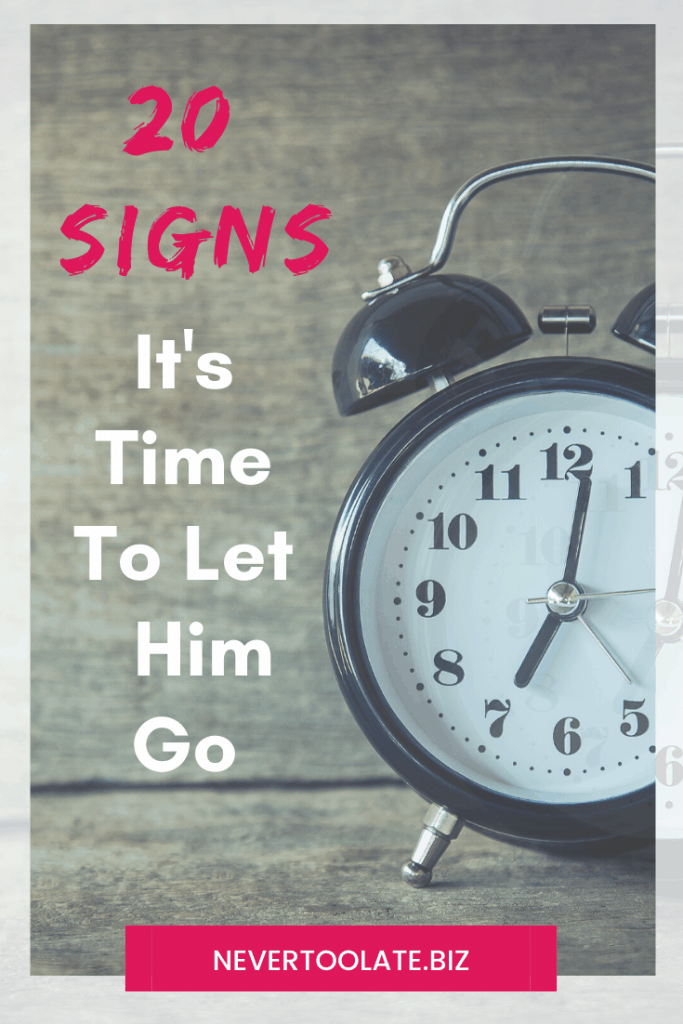 You want to be with a man because he somehow adds another dimension to your life. Perhaps you learn something new from him or he encourages you to stretch and be a better person.  He could make you laugh, bring out your creative side or build your confidence.

Too bad this doesn’t describe your guy. He literally brings you down and drains your life energy. Is that worthwhile? Think about if it’s time to let him go.

Your relationships with this fellow is just not balanced. You feel like you do all the work to keep this going and you are starting to feel exhausted. You don’t mind doing most of the date planning or communicating, but why can’t he do a little bit?

Some men are happy to go along for the ride when they find a woman who will jump in to take care of everything. Could you be allowing this to happen?

If you want to know what he’s willing to do to keep your relationship alive, STOP doing everything. You’ll find out quickly where you stand with him. It’s possible he doesn’t love you anymore.

19. He Doesn’t Want the Same Things

This is such a problem! You might have different agendas or goals for life and they do not match up. This causes you to often be going in two different directions. He prefers to rent and you want to buy a home. You want to travel and he never wants to leave the state. You want a family and he doesn’t want to be tied down.

These contrasting desires are too far apart for compromise. Sometimes the best thing you can do is admit you aren’t aligned even though it’s really sad and let him go.

Once upon a time, being with this guy made you feel blissful and vibrantly alive. You were on top of the world and felt like so much was possible. How did you get here, feeling down about your relationship?

Resolving your differences seems impossible at this point and you don’t enjoy his company anymore. So, what are you still doing together?

Time to Let Him Go

Life is too short to stay with the wrong man just so you aren’t alone. Give yourself the chance to find a better man. The only way to do that is to take care of yourself and your own needs and let him go.

That’s what a healthy, confident woman would do. I sure hope you find a way to allow yourself to feel happy again, alone or with a better man who wants the same things you want and  cares about your needs, not just his own.

All love starts with self-love. Love yourself enough to do what is your own best interest for the long run.

Looking for more? Find out how to attract a high quality man.