Interested in a man and looking for answers on, “When will he ask me out on a second date?”  Read on to find out what you need to know about understanding midlife single men. 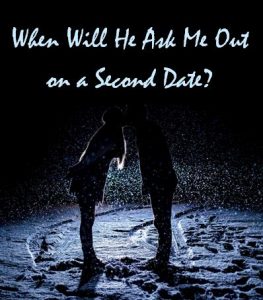 When Will He Ask Me Out Again? That’s the Big Question

You met a guy online and your first date was great! You had a good time and you know he did too. He texted you after telling you so. You’ve been texting for a few days which is fun. He’s witty and has a good sense of humor too.

But as the days tick by, you start to wonder when will he ask me out on a second date? It’s completely natural to be curious about this and even a bit anxious. Especially when you had such a good time. You really can’t wait to see him again.

You wish there was a way to make the phone ring. But there isn’t. You think about texting him to see if he’s still interested. Maybe that’s what you should do. But then you’re not sure and the last thing you want to do is ruin your chances.

Wondering when he will ask me out and waiting around stinks!

How Long Should It Take to Get a Second Date?

Not surprisingly, the length of time between a first and second date varies by the man and the situation. However, the amount of time it does take is telling.

The best case scenario is when a man asks you for a second date while you are still on the first one. That’s always a good omen! If he waits just a few days, like two to three, that’s also a positive sign. In fact, anytime within the first week is optimal. If he wants to see you again quickly, that means you are on his mind,

When the gap between first and second date is longer, like two or three weeks, that might indicate a number of things that aren’t so positive:

Yes, sometimes a man has to travel for work or has a lot on his plate. But these situations do not bode well for a blossoming relationship. When a man takes weeks to ask for a second date, of course you can go. But do not get attached or stop dating other men for him. While it’s true anything is possible, I wouldn’t bet on a guy who is slow to request that second date.

How to Know When to Move On

When you’re objective about what is happening in your dating life, then you can face facts. Not being asked for a second date within a week indicates he might not be the right man. The sooner you realize this and accept it, the less you’ll feel confused, hurt, disappointed or rejected by him. The less time you’ll spend analyzing everything you said and did and feeling badly about yourself, the faster you can move on to find the right man!

There are plenty of men out there. Don’t set your hopes on a man you’ve just met. Stay objective as long as possible. Date several men at once – just for the first few dates. Most will disappear anyway because they aren’t right for you and they know it.

See, the right man for you will WANT to get to know you. He’ll be EXCITED to spend time with you and will do what it takes to make that time. He’ll stay in touch every couple of days. He’ll text AND call. He’ll ask in advance, even if he’s going out of town, so he knows he can see you when he gets back. His consistency is a true signal of his intent.

And that is exactly what you want. A man who knows what he wants and when he meets you, he knows you’re the one to pursue. Which is exactly what he does. The right man for you doesn’t leave you feeling confused or wondering “when will he ask me out?”

What to Read Next

What Should You Do When He Won’t Commit But Won’t Let Go?

6 thoughts on “When Will He Ask Me Out on a Second Date? Understanding Men”