The question of why men pull away comes up often at the start of dating. There are so many reasons why this happens, but this post is about expressing your feelings too soon 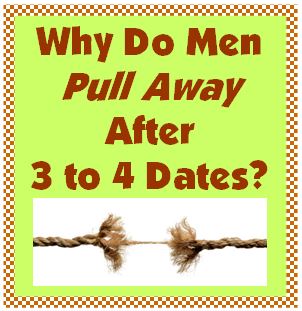 I’ve been seeing this guy for a little over a month now. We had 4 great dates and stayed at his place a few times. He has 2 kids, runs a business and races cars. We text a lot about how we miss each other and a week is too long till we can see each other again.

I told him I was falling for him and I was scared. His texts slowed down a little and I told him I’d back off seeing as I think I scared him. He’s reply was, “I ain’t, the kids I have working for me are going home for the holidays and I’m short handed as it is. I want to see you soon, I enjoy every minute we have.”

Yesterday I sent him a little poem I wrote about missing him and there has been no response as of me writing this…..

A common dating problem women face at the start of relationships is why men pull away. Lots of things can cause this reaction in men and they often have their own reasons as well.

Is there such a thing as too much honesty? Absolutely! Innocently, you expressed yourself by sharing your feelings and let him know two big things: 1) You are falling for him; and 2) You feel scared. Now I understand why you might feel this way. But why, oh why, would you share that with him after just four dates?

The start of dating, is like playing poker. You need to keep your feelings private or “close to the vest” as they say in the card game. You don’t want to let a man “see your hand” or know how you feel too early so you don’t spoil your hand or scare him off.

For the most part, women’s feelings grow and we feel more attached long before men do or acknowledge how they feel. As you start to get to know a man and things are going well, you are bursting to share. That’s great – call a girlfriend! She is the safest person to tell and she’ll really get what you are going through.

But when you tell a man, he might freak out. He could feel pressured by feelings. He might feel everything is moving too fast. He might not be ready to be serious or have made any decision about you and was still in his trial phase. Maybe he was just enjoying your company and not thinking beyond that.

Why Men Pull Away – Early Stages?

By expressing yourself about falling for him and feeling scared, suddenly turned seeing you into something more serious. That’s a surefire way to push a man away or scare him off. And that’s what happened and why men pull away.

Sometimes women wonder, “Is he testing me by pulling away?” I doubt it – women are the ones who test in a relationship. This isn’t one of a man’s usual tricks.

What To Do When Your Man Pulls Away

Now your reaction to his pulling away was right on target – to pull back yourself and give him space. That’s perfect! Except one essential detail – unfortunately you shared that with him too. Again too much honesty. Plus you said you thought the reason he pulled away was that you scared him off – now you’ve told him how he is feeling. Even though that’s a good guess, never tell a man you think you’ve scared him. How can he save face now?

Don’t reveal your dating strategy that you hope will bring a man back to you. By telling him that’s what you were doing, you didn’t let him wonder where you went. That’s what could make this move work. When you leave a man wondering if you are disappearing, then he might move forward to reconnect out of concern for losing you.

You didn’t give him a chance to wonder – you shared your strategy.

What a Man’s Excuses Mean

When you start hearing a bunch of excuses from the man you’re dating (or want to date) and he says he’s so busy with work, his children, fixing up his house, or helping a buddy, it all means the same thing. He’s got other priorities more important than you. This is “understanding men” basics.

Most men don’t want to be the bad guy and they don’t want to hurt a woman’s feelings. So they make excuses to let you down easy. “Oh I miss you too baby, but I’ve got this massive project…”

Missing Him Will Not Entice Him

Lastly, you sent him a poem about missing him. Oh no – expressing your feelings again! Missing him reminds him you are overly attached already which could easily push him away for good. Sharing more feelings will not bring a man back to you.

What Does Work When Men Pull Away?

Pull away yourself and then remain in radio silence. No texting, no emailing, no Facebooking, no calling. If he doesn’t come forward in a week or even two, count him as a lost cause and move on. Otherwise YOU WILL BE CHASING HIM and we all know CHASING MEN DOES NOT WORK.

So Tammy, the best thing you can do right now is absolutely NOTHING. Go about your business and leave him alone. If he comes back to you because he gets curious what you are up to – great! If not, move forward to meet new men and find someone new to date.

But this time, do not share your feelings or strategies with him. The best rule of thumb about sharing feelings is to let the man do that first. Then you’ll know you are safe and probably won’t scare him. Just don’t gush or go on – matching his level of sharing is the most effective strategy. Keep that under your hat for the next dating situation.

19 thoughts on “Why Men Pull Away – Did You Tell Him How You Feel?”