If you think, “Is he playing me?” I’m afraid he is. There were clear signs this woman mistook as his genuine interest. Learn the signs so this doesn’t happen to you 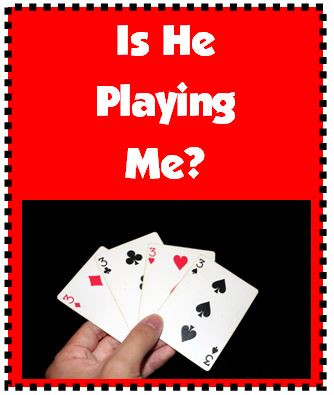 Is He a Player?

I’m wondering if you could please shed some light on this situation and how men think.

I met a guy online, we started chatting and hit it off. I asked him out for a drink and we had a really fun 8 hour date. The next day he said he couldn’t wait to do it again so a week later we did. He asked what I want out of this and we want the same thing… a long term relationship. He asked what I wanted in a man and told me what he wanted and it was all very open and honest and we agreed that whatever was happening between us so quickly needed to be taken slowly as we both usually rush into things. We went on a third but we ended up at his place and we slept together.

We communicate via text only during the week he always shows interest. We haven’t talked on the phone and even I have made the effort. We talked in person about how we feel for one another and what page we are on and its mutual. However I tried to set up another date last week but he said he’s buys with work and he would let me know. When I pushed a little further he said that he wants to slow it down. That same evening I got a message at 10pm asking me to come over. I declined as I don’t want this to be about sex.

One minute he keeps me at a distance, but if he has a beer or two he wants to be closer. He is a little shy and I think a drink opens him up a bit. It’s still early days but I feel something for this man… I trust and care about him and I really want to see where this goes but I don’t know how long I can be confused by his behavior for.

It’s only been a little over a week since we saw each other last but I feel that something has happen that has changed his mind. I’m guessing it’s because we had sex so soon? Is he really wanting to take it slow or has he lost some interest?

We get along so well and he talks like there will be a future for us, but he can be very hot and cold. He assures me everything is cool with us and that the very last thing he wants is for either of us to get hurt but he just wants to slow it down a bit. I have since given him space and I’m definitely not questioning him over and over. But I just feel that if he was as into me and I am him he would’ve at least gone out on a date instead of a booty call…

Looking forward to your answer,
Also Confused in Compton”

Wow, there’s a lot happening in your question that I want to “shed light on” for you. I sense confusion not only about his behavior, but about dating roles as well. So I will address it all to help you better understand how men think and dating.  First I’ll address the signs he was playing you, then we’ll talk about dating roles.

Is He Playing Me? Know the Signs

Long Dates – When you spend a long time with a man on a long date, your defenses come down. You start to think you know this man and feel safer than on a short date. The truth is you don’t know anything more than he’s willing to show you. Long dates are a classic seduction trick.

I’m not saying he didn’t enjoy himself with you – I’m sure he did. But he was on a mission to sleep with you and was willing to invest towards that goal. You had two long dates so of course you felt comfortable with him. His method worked since you told me you trust him, have feelings for him and care for him.

Talk is Meaningless – I’m sorry to say but his nice words are meaningless. This is another classic seduction technique. Yes you talked about everything and were in agreement – he would say anything you wanted to sleep with you! The only way you can know if a man is genuinely interested in you long-term is by waiting to see if he consistently pursues you over many weeks, like 6 – 8 weeks or more!

This is where a man’s actions are far more important than his words. Some men will say anything they think a woman wants to hear. Don’t bother talking to men early on about their feelings for you. Regular guys not trying to manipulate you will be turned off by this on the first few dates so don’t do it. And players will use it to their advantage like this guy.

Third Date Rule– This is classic timing from a man’s perspective for when to have sex and it’s been this way for decades. There is nothing wrong with sex early on as long as you won’t be upset if he doesn’t call again. If it will bother you, then hold off for at least 5-6 dates or longer.

Many men won’t think badly of you just because you hopped in the sack if they really like you. But there is no way to know if a guy is into you or just wants to sleep with you unless you wait. Going back to long-dates, some men will have a long-date hoping they can get you into bed the first night, but your guy was willing to wait for the third date.

Drunk Dialing Booty Calls – You got that one right. But this man is NOT SHY. He’s more likely wanting sex when he’s had a few beers so he called you. You were smart not to fall for this. My bet is you started thinking “Is he playing me?” right about here. It’s a sure sign he’s thinking about you for sex vs.g etting to know you for a serious relationship.

Slow Things Down – Sadly this is ManSpeake for see you later honey. You can’t go fast and then go slow. There’s no way to back things up. What he’s really saying by “slow things down” and being “busy at work” is that he’s all set and moving on. These two phrases have the same meaning and are spoken when a man wants to end things without being direct so he doesn’t hurt your feelings or cause a big emotional scene. He’s trying to let you down easy.

I encourage you not to ask men out. If you want to know if a man likes you, let him do the work and pursue you. Don’t initiate with men during the first 3 – 5 dates. In other words, don’t call or text them first and don’t ask them out. if you wait to see what a man will do to see you and win you over, you can learn a lot more about his intentions.

Date other men at the same time to help you not over think about one man and keep yourself from sleeping with them. Staying active and continuing to meet men makes it easier when some guys stop calling or asking you out which many will. That’s just a natural part of dating. Dating more than one man is a great way to hedge your bets since you have no idea which guy will continue to pursue and which one will fall away.

Last but not least, I recommend you read my book Is He the One? How to Find Mr. Right by Spotting Mr. Wrong which goes into detail about common red flags many women misinterpret as genuine interest so you never have to ask “Is he playing me?” again.

5 thoughts on “Is He Playing Me? I’m Not Some Booty Call”