How many times have you wondered, “Does he like me?” Every woman has countless times. It’s not easy to read the signs and that’s why I help single women over 40 with understanding men. Read on to find out how I answered a reader’s question about this. 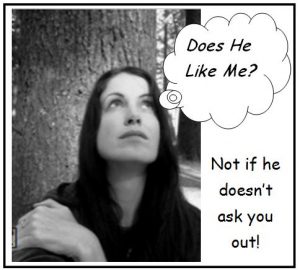 How to Know If He Really Does Like You

I used to work at a restaurant and there was this guy who worked there too who I thought was attractive. He would smile at me a lot, come over where I was at and make small talk with me. He would even nudge me when we passed each other at work. He was really flirtatious.

I felt as though he liked me, but as the weeks and months went by he never did say anything about us. He never asked me out or suggested going out for lunch or a movie, even though he continued to flirt with me .

I even saw him at the mall one day when we were both off from work and I said “Hey to him”. He started joking with me and said, “You are not at work so I can pick on you a lot more”. I said, “Oh OK.” Then suddenly he said, “Go home girl,” as if he didn’t want me to follow him or walk with him wherever he was going. But all I was doing was speaking to him.

Then the day before his last day at work, he came to me at work and told me about his last day. I thought he liked me somehow for him to tell me about his last day. Yet, he didn’t ask to keep in touch with me. In fact, when I was getting ready to leave, I went up to him and said, “Good luck with your future,” because I figured I would just be being courteous. His response was,  “Go home girl”.

This guy liked to flirt with you. It was fun. It made him feel good. But that doesn’t mean he wanted anything more.

Jumping to the Wrong Conclusions

Most single women mistakenly read signals like this and jump to this automatic assumption. It seems like the most obvious conclusion about his behavior right?

Unfortunately, connecting his flirtations with his desire to date you is way off base. If it was true, you would know because they guy follows up by asking for your number and asking you out. That demonstrates an even greater level of interest

However, flirting, texting, phone calls – none of these things on their own indicate a man wants a romantic, long-term relationship. Or even to date you casually.

He DID like you. But the question you have to ask yourself is, “How much does he like me?” Sorry to say, not enough to date you. Keep in mind, he might now want to date anyone. Or he might be in a relationship already. We’ll never know the reason why he didn’t want to take the next step.

When a Man Pushes You Away – Pay Attention!

Why did he tell you to go home several times? Because he felt you were hanging around too long, not wrapping things up or acting clingy. You lingered past his comfort zone. And, he didn’t want you to get the wrong impression that he wanted more. So, the way he handled it was to say, “Go home girl.” Sort of rude really, but probably the best he could do.

Pay attention to when a man pushes you away – that’s a HUGE signal he does NOT want more. It is also the strongest indication that HE IS the WRONG MAN for YOU.

What the Right Man Would Do

The right man would never treat you this way. He would not push you away or tell you to go home. He would be interested enough that he’d want more of you. He’d want your number and your email. He’d want more time to get to know you and interact with you.

There are plenty of other guys out there who do want to find love and a lasting relationship. Go out to specifically meet single men so you can find the love you want. Don’t jump to the automatic conclusion that flirting and texting will lead to more with any man. You can now see how untrue that is.

A man only wants to date you if he asks you out, shows up and calls again for another date. Then you’ll see how things go from there because figuring out if a man has Mr. Right potential takes time. But knowing he is Mr. Wrong is so much easier to know quickly.

2 thoughts on “Does He Like Me? Help with Understanding Men”