Wondering, “Does he like me?” You may want to come out and ask a guy if he is interested in you or not. Below, I explain why that is NOT a good dating strategy. 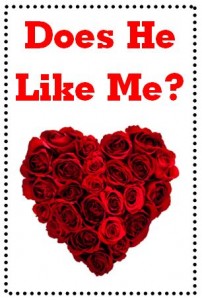 I like this guy I work with from the same organization, but different department. Last year, after listening to others, I got the nerve to ask him if he was seeing someone. He replied “Yes, but no, it’s my ex and I don’t want to open a door before I close a door.” So, he was just getting out of a relationship.

Fast forward to a year later, I’ve been hearing he does really like me and how he liked me before his old relationship started. This surprised me because I never noticed him then. I was focused on another relationship and he also never made his intentions clear.

We’ve been alone a couple times. Just recently I was in his office, initially working on something, then the conversation went into other things while the door was closed. To me, he had opportunity to ask me out, but he did not take it. His liking me seems questionable. I do really like him and want to know if I should take the chance again to approach him? Can I ask, does he like me?


Thanks,
Curious in Colorado”

You took a chance once and it didn’t get you any where. He was involved at the time. Even though people are saying he’s interested, he’s not showing that interest in his action, even behind closed doors as you pointed out. So my question to you is, “Why would you want to risk embarrassing yourself again even though you wonder, “Does he like me?”

Men know what to do if they want to date you. Asking you out is required. When a man doesn’t do this, he is not interested. Yes, it is that simple. Even if he’s shy, it doesn’t matter. Men, especially men over 40,  know exactly how to demonstrate interest and start seeing you.

What will you gain by asking him if he’s interested? Think how terribly awkward that could be!

I’m not sure why people are telling you he is interested. Perhaps they are stirring the pot or looking to create trouble. I question these gossipers’ motivation in telling you he likes you. Sounds a lot like high school doesn’t it?

Women over 40 often think the best solution to these situations that are so unclear is to be direct. Nothing could be farther from the truth! When you ask a question like, “Are you interested in me?” what kind of answer can you get? Put yourself in his shoes.

Being direct works great for business. Nothing could be better to clear up confusion. But when it comes to relationships and romance, the direct route is NOT advised. Instead, you want to rely on your powers of observation. I compare this to high school chemistry class. In chem class, you put the ingredients into the beaker, stir, turn on the Bunsen burner, then back up and watch. You OBSERVE and take notes to see what happens. You don’t stir again or add more ingredients – that messes up the experiment.

The same holds true for dating! To know what’s going on with a man, pay attention to his actions. This man is not asking you out and it doesn’t sound like he is even flirting with you. Therefore – lack of romantic interest. If you’ve got to get the ball rolling, he’s not the right man for you.

As a dating coach for women, my dating advice for you is to get out there and meet some men. Flirt, smile and be friendly. You’ll find men who want to ask you out and won’t require you to do the initiating. Men get invested in a woman when they have to win you over. So don’t try to get anything started directly, except by being flirty and riendly. Leave it up to the guys – it’s their job.

2 thoughts on “Does He Like Me and Can I Ask Him?”