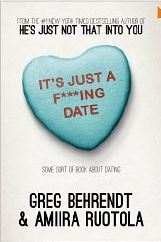 I must say I like the title. Taking the pressure off dating and getting used to meeting new people is the advice I share with my dating coaching clients. There is way too much intensity about each man or date and a little relaxing about it would help countless single women.

Recently Oprah’s Lifeclass featured the authors talking about this new book and I saw a promotional clip about the show. My reaction was immediate and strong to what Greg was saying because I disagree whole-heartedly! Greg and his wife and co-author Amiira Ruotola, say that dating has become unrecognizable. In their opinion, dating has sped up to be not much more than “Tweet, tweet, sleep over, breakup.”

I don’t disagree with this. But I do disagree with his idea that the root cause of this new style of dating is women have lowered their standards due to low self-esteem. No way! To me is off base. Let me tell you why.

Today women are more capable than ever of taking care of themselves. Many are super successful with power-house jobs and plenty of confidence to go around. Women are independent, strong, and enduring. That’s not the problem. So what is causing the “Tweet, tweet, sleepover, breakup” syndrome?

The cause is not knowing what dating should be like.

That’s right – Women don’t understand that relationships still take time to develop and blossom. For the most part, this is no one’s fault. Women are certainly not stupid and they don’t lack self esteem. What they do lack is knowledge and as we all know, knowledge is power.

In the high-tech, instant access world we live in today, it seems like getting into a relationship should happen more quickly. Since you can connect online, why not launch into a relationship? Too bad that’s now how dating works.

See, dating has not caught up. Nuh uh. Dating is an archaic mating ritual based in biology. You cannot take the DNA out of dating. I realize this might seem ridiculous to you , but it’s all true. The implications of this fact are that men and how you relate to them, date them, and start relationships with them hasn’t changed very much in decades.

Now, its true, relationships have changed in terms of sharing responsibilities for raising children and household upkeep. Unfortunately, the same is not true for dating which is the first 4 – 8 dates. Everything that happens before you know you have a regular date on Saturday night is considered dating. After that point, you are in the first phase of relationship. That’s when things tend to balance out and get more modern.

However, during those first 4 – 8 dates, you need to understand men and that the process is still old-fashioned if you are seeking a long-term, loving relationship.

Here’s what I want you to catch on to.  Most women are shockingly unaware of these basics from Dating 101. Many call me backwards, out-dated and not with today – but women who think this about me are still single and showing their ignorance. After my own dating experience (30 men in 15 months to meet my husband) and 12 years as a dating coach for women, I have absolutely no doubt this is how things work. Case closed, over and out.

The New-Old Rules of Dating

The #1 piece of dating advice I can give any woman who wants to find love is to be approachable, friendly and a pleasure to be with. Show up as your best self because it does matter. How you look, how you dress, hair and makeup, and how you present yourself and what you share about your life. Be positive! You’d want him to be at his best right? If he’s not, you are turned off. Men feel the very same way.

Additionally, men get invested when they have to win you over. So if you do all the work, calling him, texting first, asking him out, he’ll never get invested in you because you are making it too easy. What is easy is less appealing – this is human nature and a fact of life.

Learn what works today because most of what you think
or see on TV is so wrong.

To wrap up, here’s my favorite dating analogy – Ballroom Dancing. In ball room dancing, there is only one leader and one follower. As the woman you know what your role is. When you let a man lead the first 4-8 dates, you’ll learn everything you need to know about him. But, if you try to lead, you’ll learn nothing about what he would do to win you over. And that is the most important thing to predict the long-term possibilities and get a peak at his true intentions.