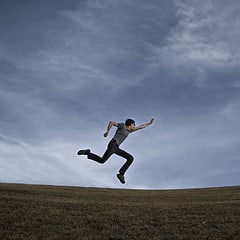 Running From Your Aggressive Moves

Here’s a little secret I don’t tell everybody…I have a few male dating coaching clients as well. I love coaching men because I learn so much about how they think to share with all of you!

Recently, my client, Ken, told me about a woman he just met online. The first date was on a Saturday night, lasted for about six hours and went very well. Ken found her to be a lot of fun to talk to and really enjoyed her company.  (Ken and I have some work to do because first dates should never last this long.)

Let me share background on Ken. He is a good looking guy in his 50’s. He’s practical, down-to-earth and easy to talk to.  This is a man who has done his healing after divorce and wants a long-term, loving, relationship with the right woman.

Since he liked Sandra a lot, he made a second date at the end of the first. He suggested getting together a week later on Sunday night, which Sandra was happy to accept.

Now, this is where the story gets bumpy. Apparently, Sandra is very hot on Ken. She is not managing her enthusiasm and letting the man lead during the initial courtship. Sandra made a series of what I call “Fatal Errors” that caused her to look over-eager and a little bit desperate. Here is my advice as a dating coach for women in midlife (or at any age really).

1. Don’t call him in the beginning
She couldn’t wait the eight days for the second date that Ken set up. So she took matters into her own hands and called him. Some men feel like you are invading their private space when you do this, so it’s a risk.

2. Don’t pursue him. Let him ask you out so you know he is interested.
While Sandra had Ken on the phone, she asked him out for Thursday night, creating her own second date. Ken’s a nice guy and frankly felt flattered. So he agreed to meet her Thursday.

3. Don’t buy men gifts!
When Ken arrived at the designated meeting place for date two, Sandra had not one but two gifts for him. They had talked about favorite books and wine, so she bought him one of each.

4. Don’t have marathon dates.
There is some driving distance between where Sandra and Ken live, so the dates have been longer than usual. Date two was also more than six hours.

You may think I am overreacting but I assure you that I AM NOT. This is what Ken said to me after the second date.

“Well now I have my third date in a week coming up. I’m not sure I want to spend that much time with her so quickly. She bought me gifts you know. Why did she do that? I mean it was nice and all, but I felt uncomfortable. I didn’t have anything to give her. It was awkward. I was flattered that she called and asked me out and I had a good time, but now it feels like too much to be seeing her again so soon. I just started dating online and want to meet other women, so now what do I do?”

In truth, Ken played a role in some of these mistakes.
– He didn’t keep the first date short.
– He accepted her date request rather than waiting.
– He didn’t go slow at first to avoid letting things get serious too quickly.

Single Gals, Please Hang Back and Let the Man Lead – You Can’t Go Wrong
Regardless of the mistakes Ken made, it’s your job as a woman to manage some of the dating mechanics. Please control your enthusiasm so you don’t appear over-anxious or worse – desperate. Don’t call men, try to speed things up or ask them out on dates in the beginning. And don’t buy them gifts for any reason, unless it’s a birthday, then get a token gift. This all boils down to the basic rule of thumb – don’t pursue him.

Don’t Lose the Only Advantage You Have!
Wait to see what a man will do of his own accord to win you over. If you do not do this, you lose the only advantage you have to observe his behavior and collect information about how interested he really is in you.

What Seems Like A Nice Thing Can Negatively Impact His Masculine Ego
The risk of you initiating is HUGE because you could make the guy uncomfortable and look elsewhere for women who make him feel good about his masculine energy or enhance it. That’s the problem!

If you pursue him, chase him, call him, ask him out and buy him gifts, you are USURPING HIS MASCULINE ENERGY and emasculating him. This will never help him feel good about you, so DON’T DO IT!

Learn from Sandra and Don’t Make These Aggressive Fatal Dating Errors
You want a good man to grow more attracted to you. Give him the space and time to pursue you and get invested in you. Men are slower to bond and there is nothing you can do to hurry this process for him. Your efforts to let him lead will usually be rewarded. But at the very least, you won’t send men away suspicious and worried that you like him too much too quickly – like the movie Fatal Attraction.

PS. If you’ve made this dating mistake, listen to my Free Audio Program 12 First Date Mistakes Women Make that Ruin Your Chance for Love.  Or schedule a Free 30-minute conversation with me to discover how coaching can help.