Seeing signs he doesn’t want a relationship with you but seems to like you? It can be so confusing! Here’s how to know for sure if the man you’re dating is wasting your time or truly interested.

How to Know If He Isn’t Serious 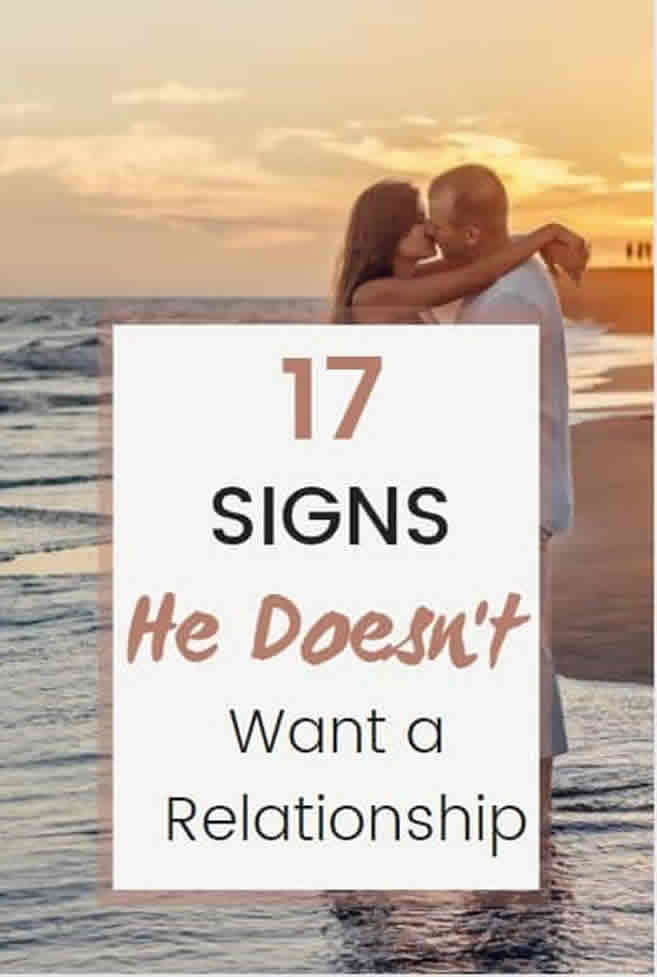 Whether you’re intuitive or not, women always wish they could read a man’s mind.

The reason? Because we need to know DOES HE LIKE ME OR NOT? And we spend a LOT of time trying to figure this out.

You watch all the signs and read into situations to interpret what you think they mean.

Wracking your brain, you read a bunch of articles on the web. Feeling frustrated and at your wit’s end, you drive yourself (and potentially your friends and family too) CRAZY!

But here’s what you really need to know. You don’t need to be a mind reader to discover if he’s serious about you.

Instead, understanding where he stands is not about what he THINKS as much as WHAT HE DOES. For the most part, a man’s actions tell you everything you really need to know.

Find out how to get a good guy with this Free Audio Program 5 Surefire Ways to Get a Quality Guy!

I’ve uncovered 17 signs he likes you but doesn’t want a relationship and I’m sure there are even more.

If you read through these, you’ll know what to look for or how to read the signs he is sending.

So, read through the list and if you have more than one of these situations going on, it’s time to get real about this guy and realize he’s probably not “The One” for you.

1. He Texts But Doesn’t Ask You Out

Some men love to text or they call and talk on the phone for hours. Yet, they never get around to asking you out. Or they go on one or two dates then revert to the phone.

This type of thing is usually a sign that a man wants attention and maybe emotional support, but not the responsibility or expectations that come from a true relationship.

He’ll take what he can get from you, but never give you what you need. The solution – STOP COMMUNICATING. 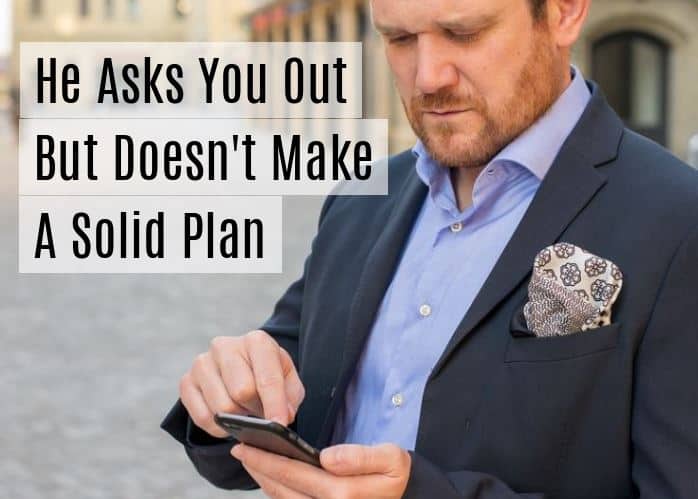 2. He Asks You Out But Doesn’t Make a Solid Plan

After some texting or talking, he finishes up with, “Let’s get together this weekend.” But he doesn’t nail down a plan.

What is this about? He might enjoy texting or talking with you but doesn’t want or need anything more from you.

Or he’s stringing you along while he’s waiting to see who else might be free before committing to a date.

3. He Talks About The Future But Puts Off Plans

Some guys love to talk about the future. They bring it up even if you don’t, which is why you think it has MEANING.

Truth is, future talk means NOTHING and could just be his fantasy. Or the idea feels good at the moment.

You know this because he doesn’t follow through with plans. He might actually say he can’t make plans now because he’s too busy or has things to straighten out first. 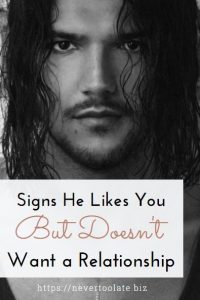 4. He Doesn’t Introduce You To Friends Or Family

When a man is serious about you, he will slowly introduce you to some of his friends and then his family.

It could take longer for a family – may be up to three months. (For children it might take up to 6 months which is perfectly acceptable.)

Usually, within the first two months, he will introduce you to SOMEONE.

So, if he’s keeping you a secret and not getting you to meet his peeps, he doesn’t want a real relationship.

5. He Won’t Define The Relationship

If you’ve been seeing a man longer than three months and he refuses to define the relationship, that is NOT a good sign. A man who is serious wants to claim you as his and give you the “Girlfriend” title.

This is definitely one of those telltale signs he likes you but doesn’t want a relationship.

6. He Disappears But Comes Back

This guy is either texting like crazy or completely silent. He shows up, interacts with you and maybe goes on a date or two, and then he’s gone again.

What is up with that? He may have intimacy issues, be dating other women or doesn’t want anything serious to develop.

A man who is on and off again is NOT the right man because you need consistency for healthy, lasting love. Often this is one of those signs he doesn’t know what he wants.

Perhaps he says he likes you and you are the one for him or maybe he’s not saying anything except that he’s too busy to see you.

He can’t make plans right now because of his job, his boss, his crazy ex, his family, etc.

If he puts you off, that’s a sign he doesn’t want a relationship with you.

You can find a good man –  Free Audio Program 5 Surefire Ways to Get a Quality Guy!

8. He’s Friendly When He Bumps Into You

This guy is SO happy to see you when he bumps into you at a party or around town.

He sticks by your side as if he really likes you. So, you would think he’d contact you after. But nope, he doesn’t connect.

This is extremely confusing because of his actions when he sees you are different than when he’s out of touch.

Just keep in mind that a man who does nothing to see you does NOT want a relationship with YOU. Or it could be one of those signs he doesn’t know what he wants.

9. He Won’t Make It Official 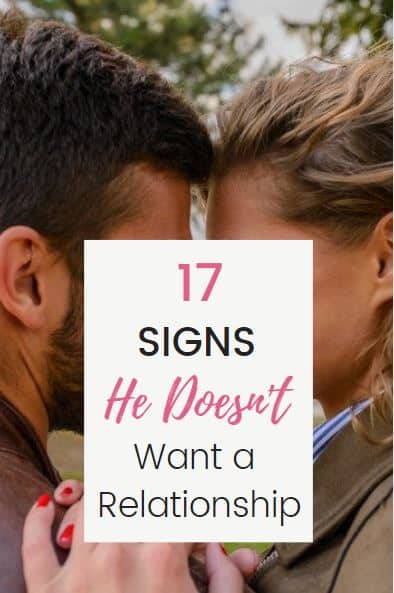 You’ve been seeing this man for several months, but he won’t make it official. He prefers to just go along as things are and don’t want to rock the boat.

It’s good the way it is, right? Not if he’s serious about you!

10. He Says He Misses You, But Does Nothing To See You

Some guys just know what to say to keep you hanging on and this is a perfect example. If he says he misses you but makes no attempts to see you, it’s complete bullsh*t.

Don’t fall for this and believe his empty words. If he really meant it, he’d do whatever it takes to spend time with you. No excuses!

11. He Refuses To Be Exclusive Or Take Down His Profile

Pay attention to this – it’s one of the biggest signs he likes you but doesn’t want a relationship.

When a man is unwilling to take down his profile for any reason, he’s letting you know he has NO INTENTION of being exclusive.

This is a man who wants to play the field and is not interested in monogamy. The same thing goes for a man who is unwilling to agree to exclusivity. Forget these men – they don’t want what you want – lasting, monogamous love. 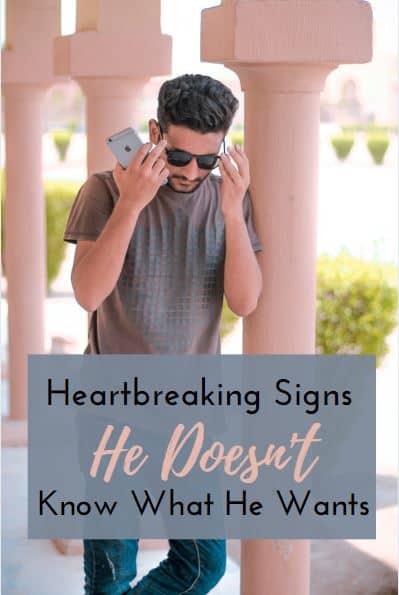 12. He Said Doesn’t Want A Relationship

A lot of men will often come right out and TELL you they don’t want a relationship or aren’t looking for anything serious. When a man says either one of these phrases, BELIEVE HIM!

Many women tend to ignore this because he couples this comment with, “But I’d like to get to know you and see where it goes.”

That’s the sign of a man who is non-committal and just wants something casual.

13. He Has Problems To Work Out

You might meet a great guy who has many of the qualities you want. Too bad he has issues that are getting in the way.

Maybe he’s unemployed or has a difficult boss and has to work all the time. He’s got a crazy ex and has to carefully manage her and the kids. Perhaps he has health issues that he blames for not being able to get together.

Whatever his problems are, they become your problems if you let them. Yet, last time I checked, you didn’t need more problems!

If you meet a guy who is wonderful but has issues dragging him down, he’s NOT READY for a relationship. Let go and move on if you want a good relationship.

This is not the same as if you were in love for years and a problem cropped up – that’s completely different.

Download this Free Audio Program to Attract a good man 5 Surefire Ways to Get a Quality Guy!

The guy you are seeing talks a good game and makes plans, but often cancels. Keep in mind it’s not the making of the plan that counts, it’s the follow-through.

Whether he means well or not, no one cancels often without it being one of those signs he doesn’t know what he wants. Move on. 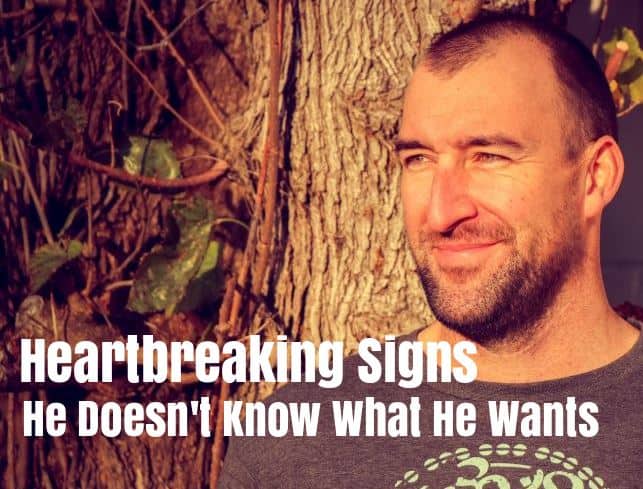 15. He Avoids Talking Things Over With You

An issue crops up with the man you’re dating. You try to talk about it and let him know how you feel, but he will not discuss it. That’s one of the signs he likes you but doesn’t want a relationship.

You cannot maintain a healthy relationship if you cannot communicate or talk things through. This is how you get stuck with an impossible man where everything is his way or the highway.

Don’t let it happen to you. If he’s unwilling to talk or is inflexible, walk away and find a better man who is relationship-oriented and more emotionally mature.

This guy is sweet, but for a number of reasons you never go on real dates. He’s happy to hang out with you at your place.

He might bring over a pizza or take out. He’ll watch a movie or sit by the fire – it’s all very romantic.

The problem is, you never go out or on a real date. He doesn’t take you to dinner like most men. He doesn’t want to be out in public with you.

Ahhh, there’s one of the biggest signs he likes you but doesn’t want a relationship. That’s because he’s already in one!

This guy is cheating on a woman and CAN’T BE SEEN WITH YOU or he’ll get caught.

Run, don’t walk, away from this guy no matter how much you love him.

17. He’s Not Curious About You Or Your Life 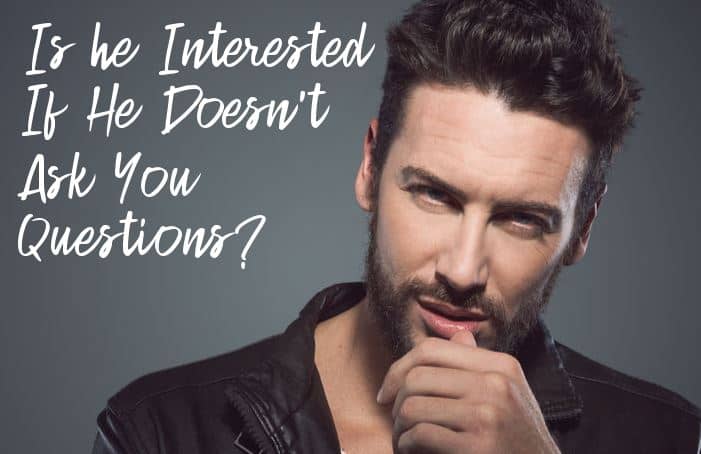 Last of the 17 signs he likes you but doesn’t want a relationship, is that he’s not at all curious about your life.

He doesn’t ask many questions. He doesn’t remember some big events in your life or wants to know how it went.

He’s not boring, it’s just that his main interest is himself. So, if you’re happy with everything being about him and being in a one-way relationship with a narcissist, that’s your choice.

My dating advice is to dump him and find a better man for a loving relationship that works for you both.

Signs He Likes You But Doesn’t Want A Relationship