Starting to think he doesn’t want a relationship with you? Here’s what you need to look for to figure out if he’s just playing with your heart. 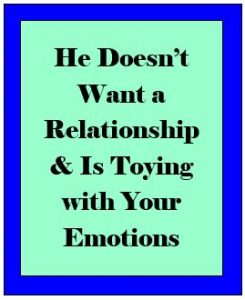 He’s Not Serious About You

Understanding men can be so mind-boggling.  Situations often don’t make sense. You worry and fret, wondering if he wants a relationship with you or not and feeling confused is wearing you down.

The trouble is he does show some signs of actually liking you. So, how can you tell with these mixed signals? Your girlfriends say to give him a chance and that you are too picky.  Are they right?

If this is sounding all too familiar, then it’s time you learn the signs that he doesn’t want a relationship and he’s not serious about you either.

A man who is separated is actually STILL MARRIED. I’m not talking about this from a moral point of view – just from the facts. That means no matter how long he’s been separated, he’s still connected to his wife in some way. She is NOT his ex!

A man who has not completed his divorce is not ready for a new committed relationship. He might be lonely and want the company, but if you help him do his healing to get over his wife, chances are outrageously high as soon as he’s feeling good again he’ll dump you for someone new. That’s just how things work.

2. He Told You He Doesn’t Want a Relationship

Plenty of men come right out and tell you up front they don’t want a relationship, but are happy to get to know you. He is specifically telling you he’s not ready.  When a guy tells you this BELIEVE HIM. He is not going to fall in love and change his mind. This kind of thinking only leads to heartbreak.

Other similar language includes he’s not looking for anything serious right now or he just got out of a relationship and needs space. Pay attention if a new man you meet says anything at all resembling these statements. He MEANS it, so if you want lasting love, walk away now. Don’t be like the majority of women who ignore this waving red flag.

3. He Looks at Other Women

This rude habit is surprisingly common. You’re out with your guy on a nice date and he’s looking around the restaurant rather than at you. When you are alone it seems like he only has eyes for you, but out in public, it sure is a different story.

You’ve talked to him about how much it bothers you. He said he’s trying, but usually it’s not long before he reverts back to this habit. You tell yourself it’s natural for men to look and as long as he keeps calling and asking you out, everything is OK. But is it? Not really. His roving eye tells you he’s not that into you, so bail now before he starts cheating.

He’s super busy at work, his child is sick, or his ex needs help. It’s always something with this guy and last-minute issues cause him to break your dates often. You’re patient and give him the benefit of the doubt because you REALLY like him.

Here’s the thing. Anyone can feel sick, have a tough boss or a crazy ex. But if there’s always SOME REASON why he can’t see you, that’s a sign he’s not serious or he’s not ready to commit to anyone. People can be overwhelmed by life making them unreliable. That’s how you know he’s not the right man. You deserve a man who is ready for love, can keep a date and has the bandwidth to spend quality time with you.

5. He Doesn’t Reveal Much About Himself

When something is going on with you, you talk about it. You’ve told him about your family and friends and maybe even a bit about work. Yet, how much do you know about the man your sleeping with? Does he share stories about his life?

If your man is not telling you about his friends, his job or his family, he doesn’t want a relationship. He’s not making you a part of his life and bringing you closer. After 5- weeks if you still don’t know much about him, this will not improve and it’s time to move on.

6. He Talks about His Ex All the Time

Even though his divorce is over or his big breakup was a while ago, he manages to talk about his ex constantly.  At first you were interested and wanted to offer emotional support. But now that weeks have gone by and he’s still complaining it’s getting rather annoying.

7. He Won’t Define Your Relationship

If he doesn’t refer to you as his girlfriend around others, that’s a red flag. Men who don’t want to use labels or define the relationship are definitely not serious about you. Forget about his fear of being hurt again or whatever he blames this resistance on, it’s a sign that your relationship isn’t going anywhere.

8. He Doesn’t Take You On Real Dates

You never go out on real dates in public, like to dinner, or listen to music or even the movies which is how you know something is not right. Some men bring over takeout food and want to snuggle on the couch and in the bedroom. They talk about how they’re tired and just want to be with you.

Maybe he says he’s keeping you all to himself and you’re his little secret. That’s a telltale sign that should make you very suspicious. He’s probably got another woman in his life and he can’t take a chance of being seen with you! Ask him to take you out and if he won’t, it’s time to walk away. You deserve a full-fledged relationship, not a secret lover.

You never know with this guy – sometimes he’s totally into you and then he disappears for a while or seems uninterested. Like he could take it or leave it when it comes to seeing you. This kind of treatment wreaks havoc with your self-esteem.

Or maybe you have big fights that cause his hot and cold behavior. While you might enjoy the makeup sex and excitement, he’s showing you that life with him will always be a dramatic roller coaster. It’s possible you’ll never know where you stand. Sadly, this is not the sign of an emotionally mature man who knows what he wants or someone who is serious about you.

His spontaneous ways were fun when you first met. But, after a couple of months, his inability to plan is getting old. He often leaves you HANGING making it hard for you to plan anything else. This causes you to miss other social opportunities and leaves you feeling like you are not that important.

If your man is doing this, the truth is his schedule matters most to him and he’s likely keeping his options open till the last minute. Now you know he doesn’t want a relationship, because this sure isn’t a way to build one. In addition, he’s demonstrating a level of selfishness that’s warning you about his ability to be a good partner.

Your guy is pretty much amenable to whatever YOU want to do. That sounds fantastic until you realize everything is up to you. You have to come up with the ideas, ask if he wants to go, figure out the details, make reservations and he’ll show up.

Perhaps having everything your way seems great initially, but then you start to realize this guy never initiates ANYTHING! Yup, he lets you do all the work to maintain this relationship and you are tired of it. Maybe you’ve tried talking to him and have said that you’re not planning another thing. Then, you give in because you really like him and want to see him.

Most importantly, when a man lets you initiate everything, he’s showing you he’s not invested in the relationship. He’s not trying to win you over – he’s passively going along for the ride. Doesn’t sound like a  recipe for lasting love to me.

Accept It – He Doesn’t Want a Relationship

All 11 of these signs let you know that your boyfriend is toying with your emotions, messing with your head or biding his time until another woman comes along. None of those situations are what you want or deserve.

You might be tempted to argue with these signals or think your situation is a little bit different, so they don’t apply. The truth is THEY DO APPLY. If you want lasting love, the best thing you can do for yourself is wake up to the fact that the man you’re seeing is NOT serious or into you. Even though that’s a painful realization, you might as well be honest with yourself.

The sooner you accept his inability to be the man you want, the sooner you can move on to find the right man for the epic, lasting love you’ve been dreaming about for so long. He’s out there, so free yourself up as soon as you can.

If you want more help with understanding men, download my free book His Mixed Signals Are So Confusing