Worried you’re in a one-sided relationship? This is a painful experience that can eat away at your self-esteem. To settle this once and for all, below you’ll find 11 surefire ways to figure out if this is happening to you. 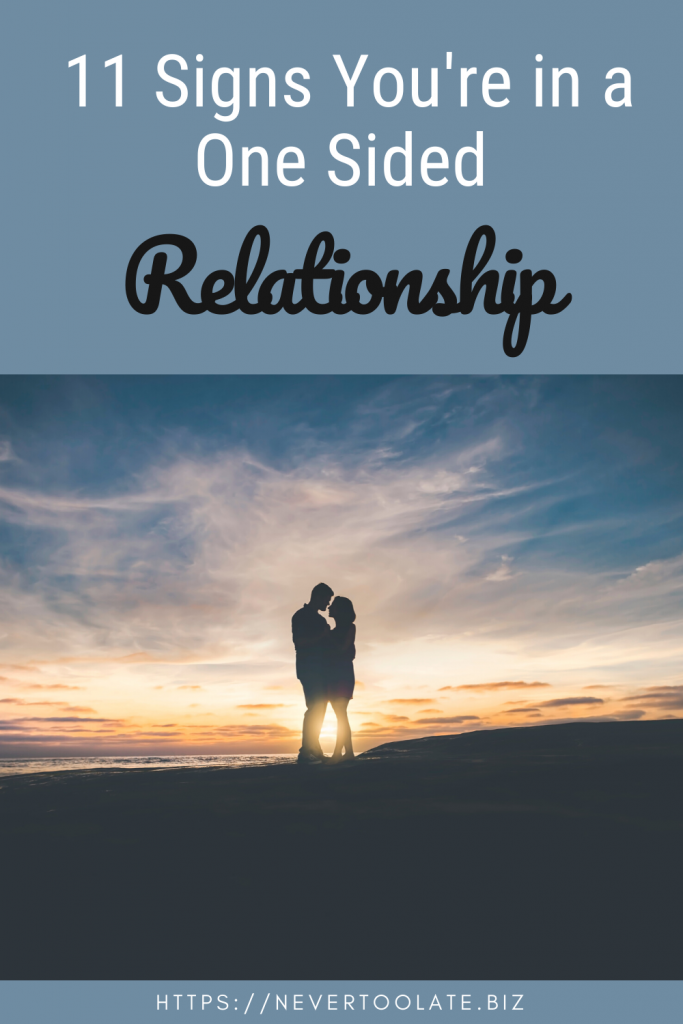 Is it Me or Is This Relationship One-Sided?

Do you often find yourself thinking that your relationship is one-sided? This can make you question yourself and wonder if you are making things up, too demanding or it just feels this way.

First, let me assure you that if this thought comes to mind, you are not likely making it up. You are probably picking up on real signals that something is off or doesn’t feel right.

I’m a huge fan of trusting your intuition and paying attention to your instincts. Not doing this will often cost you.

11 Clues You’re in a One-sided Relationship

Below you’ll find 11 not so subtle clues spelled out for you. The point is to make this really clear, so you no longer doubt or beat yourself up over this concern.

No matter how much you like this man, if you see more than one of these signs, it might be time to rethink this relationship because your needs are probably not being met.

1. He Leaves You Hanging

Your guy might talk about getting together over the weekend, but leaves you hanging about the details. This is called a “vague date” and is a way of stringing you along while he sees if something better comes along.

Definitely a clue that you’re in a one-sided relationship because he is only thinking about himself in this situation.

Maybe he does make a plan, but then he cancels. Often. In fact, he might cancel as often as he makes a plan. You feel like you can’t count on him to show up or follow through.

This is certainly not a sign that he respects you. Nope, this is another example about how he sees your relationship through his eyes only.

When he reaches out to you, you always respond right away. Not him. He takes his sweet time and sometimes you have to text or call again to get his attention.

He says he’s sorry but, super busy with work, his kids, chores or a list of excuses. Whatever it is, it’s really starting to bother you. Could be he’s not that serious about you.

4. He Waits Til the Last Minute

Perhaps your man has a lot on his plate, so he calls to catch up and see you sporadically. That means he’s always asking for a date last minute, giving you no time to plan. You have a life too!

You think you should give him the benefit of the doubt and be patient. However, he is actually disrespecting you and you deserve better treatment. 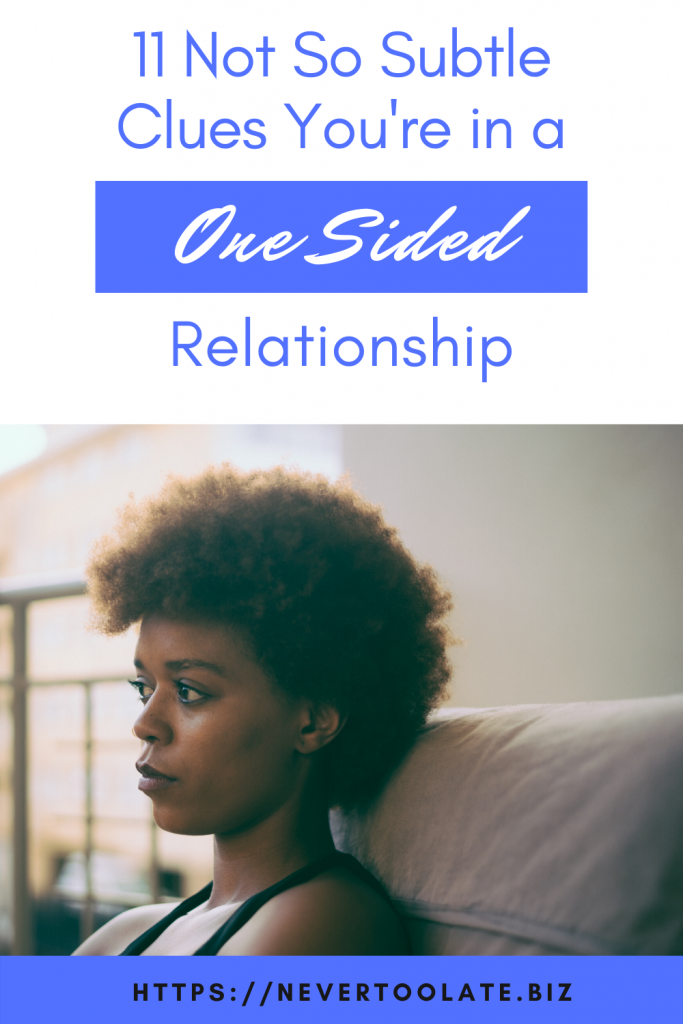 5. He Never Makes a Plan

Some men just won’t plan ahead and that sums up your one-sided relationship perfectly. He tells you he’s just not a planner and likes to be spontaneous and his plans change frequently.

You long for a man with a plan, because although you can roll with this, it’s wearing you down. How can you go away for the weekend, take a vacation or buy tickets to anything? This is a big clue your relationship is one-sided.

Your guy loves to come over, get some take out and watch Netflix. Nothing makes him happier than hanging out with you since he needs to relax.

Great for him, but what’s in that for you? Going places and sharing experiences deepens a relationship, so if he won’t even take you out for a meal, you know he’s not taking this one-sided relationship any further.

In fact, if your guy just wants to chill at home, I’d be  suspicious as this is often a sign of a cheating man. He can’t afford to be seen in public with you because he has another woman. Ask him who else he’s seeing to get at the truth.

Even if he responds right away, he rarely initiates even a text. When you want to talk to him you have to make it happen. That can get seriously tiresome and is definitely a big clue you’re in a one-sided relationship.

Once you get past basic dating, a healthy relationship is one where both people contribute equally or close to it. If you are doing all the work, you’re in a one-sided relationship.

8. He Works You into His Schedule

Your entire relationship revolves around his schedule and what is convenient for him. You put up with this, thinking you should be kind and patient and even try to convince yourself that it’s not a big deal.

But it is! If you always cater to him you are in a one-sided relationship. Some accommodations need to be made for your life as well or you are suppressing your own needs.

That is not healthy and at some point you’ll blow up for being taken for granted or treated like a second class citizen.

This man has a lot going on and as a result has plenty to talk about. He reaches out for your support and this actually feels good to you. You assume he trusts you, relies on your wisdom and appreciates you.

The thing is, when you need something, he’s in a rush, too busy or wants to talk about it later which means it will never happen. Or he might sort of listen, but not give you his full attention the way you do for him. Seems one-sided to me. 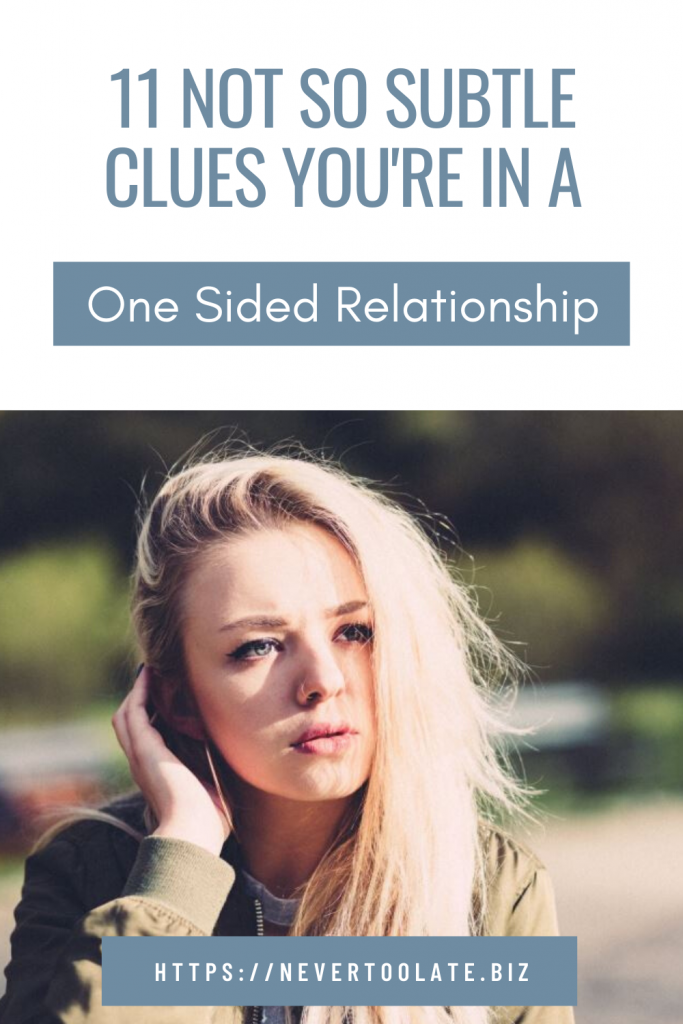 This might surprise you, but when you take a step back and think about it, you really don’t know much about your guy. You have fun together and the conversation flows. But he doesn’t talk about his family, growing up, or his friends.

You’ve never seen his place or know little about how he spends his time when he’s not with you. This is another suspicious clue that he’s likely hiding something. Maybe there’s another woman or something else he doesn’t want you to find out about.

Somehow, your man always needs some kind of favor. They might be little things like stamps or picking up something at the store. Or bigger requests like walking his dog, doing his laundry or lending him money.

When the man you’re seeing always needs a favor from you and doesn’t reciprocate or reward you for going the extra mile, that’s definitely a problem.

He’s a taker and he’ll keep taking until you are bone dry or explode. Oh yeah, that’s a one-sided relationship for sure.

Now that you know you’re in a one-sided relationship, what can you do about it?

Whatever clue fits your situation, it’s time for a frank discussion. Let me give you some guidelines to make a talk with your guy as productive as possible. This should help you avoid ending up in a terrible fight.

The one-sided relationship is often a result of not valuing yourself enough as a woman. You might worry about being too demanding or think you should be more understanding. Most woman are TOO GIVING, hoping for love in return.

My dating advice is to build up your self-esteem and value yourself enough to know that you deserve a wonderful, generous man who cherishes you.

The decision to move on is up to you and how you feel about yourself. A confident woman knows it’s worth looking for a better man.

Love yourself first enough to know you deserve the best!

Want to know how to find a good man? Listen to this free audio program 5 Surefire ways to Attract a Quality Man