Looking for signs he doesn’t love you even though he claims he does? Men can be so confusing and how are you supposed to know what is true? That’s what I’ll share with you in this post. 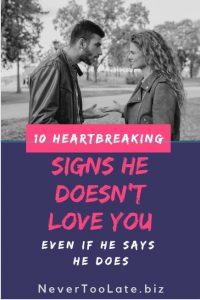 I met a handsome man who was smart, charming, and hardworking via Facebook years ago. He messaged me flirting and wanted to meet up. We did and I could tell immediately that we had a connection.

We’ve been friends ever since and admitted our feelings for one another, but haven’t been single at the same time. But honestly, we still flirt and sometimes send graphic texts.

He Said He Loves Me

Suddenly, one day he told me he loves me. I was floored – we’d just been friends. I said we should meet up to talk and invited him to my place for his favorite beer, the steak he likes and of course me – hahaha. He loved that. What man wouldn’t?

As it got closer to the day and I texted asking what time he would be here and never heard a word. Nothing. I tried to call and he didn’t answer. So, I let it go.

A few days later he told me his father passed away so I sent him a card and backed off. Fast forward to this week, 6 days ago he said he wants to see me. I said I would love that, but then he vanished again.

Why does he keep avoiding me when he could “chill” with me like he has wanted to? I haven’t sent him texts bugging him, but wonder why a man wouldn’t jump at seeing someone they care about so much and have fun?

Please help me understand what he’s up to because a friend told me these are signs he doesn’t love you.

You certainly asked the right question! What man wouldn’t jump at seeing someone they care about? That’s actually your answer too- now you know he doesn’t really care. He doesn’t love you because this is NOT how men in love behave.

Men in love don’t AVOID you, disappear, vanish, blink on and off, or run hot and cold.

So, it looks like you could use help understanding men and the difference between what they say and do. Not to worry – I can help for sure! Once you know what to watch for, the signs he doesn’t love you, then understanding men will be much easier.

10 Signs He Doesn’t Love You

If you are feeling confused about a man you know, flirt with, are “talking to” or dating, these signs he doesn’t love you will start to become obvious. to know what you are dealing with. A lot of men talk about love but do they mean it. These 10 signals let you know that sadly, he’s just not serious about you.

1. Doesn’t Reach Out Or Initiate

If you’ve been “talking” to a  guy who seems into you, but doesn’t reach out or text first, that’s one of the signs he doesn’t love you. It takes two to tango and this guy leaves it all up to you?

He doesn’t initiate dates or getting together either? Oh no, I’m so sorry to say that’s now what real love looks like.

2. Takes Too Long To Respond

Whenever you text or call, he takes forever to respond. He might apologize saying he’s super busy at work or with some project o with his kids.

Okay, now we all know people make time for what’s important to them. That means you’ve been downgraded in his life to last on the list. Does that sound like true love? Nope. Not to me it doesn’t.

3. Talks About The Future

He talks about seeing you or planning a trip or vacation, but nothing ever materializes. You just can’t seem to nail him down about the details of getting together until it becomes maddening. If he was serious about you, he’d make time.

Your guy says all the right things. But then there’s no follow through. He doesn’t come over on Tuesday, take you to dinner Saturday or help you fix something at home.

He’s a very nice, he always apologizes profusely and makes another promise he doesn’t keep. He might even have perfectly reasonable excuses, but they’re still EXCUSES.

5. Tells You How You Should Feel

No one gets to tell you how you feel. If you ask to see more of him, he tells you to chill. When you’re mad he didn’t keep another promise, he tells you not to make a big deal out of a such a small thing. He think you always overreact.

These are examples of a man who doesn’t care about your feelings – if he did, he’d never discount your feelings like this. Maybe he’s just using you.

6. Doesn’t Make Time To See You

Oh yeah, he’s SO busy with a million excuses. His boss is a hard ass, he’s got a huge project, there’s so much pressure at work, he’s under a deadline again, etc. And those are just his work excuses! His kids might need him, his ex is crazy or he’s still not feeling right after the flu.

No questions about it- you’re seeing signs he doesn’t love you.

The right man for you makes time to see you. He FINDS A WAY. That’s because he is seriously interested and makes seeing you a PRIORITY.  No matter how great a guy is, if he doesn’t have time to see you, that means he’s not really available.

And you deserve better!

7. On and Off Relationship

Sometimes you feel like pulling your hair out because you fight and break up and within a week or two are back together. Maybe the makeup sex is really good. Maybe you don’t realize you don’t have to put up with this.

Fear can play a role in sticking with a hot and cold guy. When things are good, it’s amazing. But when things are off, it’s debilitating. You might worry there won’t be another guy who is this good when he’s good. Trouble is, he’s not consistently good or available. You can’t count on him!

Knowing you deserve a man and a relationship that is consistent and healthy can help you let go and move on. 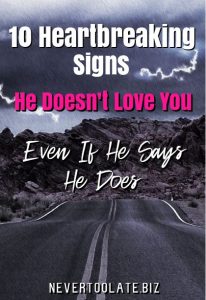 This can show up in different ways. He might make fun of you in front of others or just between the two of you. A little teasing is fine, but if this is hurting your self-esteem, it’s not healthy or appropriate.

He might also be disrespectful about your passions or what you believe in and says mean things about how he disagrees or thinks your beliefs are dumb or foolish. All signs he doesn’t love you.

A lack of respect can also show up in not fighting fair or shutting you down when you are trying to tell him something important to you. To have a healthy, loving relationship, respect is essential.

He picks a fight for no reason or blames you for things that are not up to you. You never know when this will happen and so you walk around on eggshells, hoping everything will stay nice for a while.

It’s great when you get along, so you do what you can to avoid conflict. Again, this is not a healthy relationship. When a man starts fights for no reason, it can be a sign that he’s trying to push you away so you’ll break up with him.

10. Your His Special Secret

This man loves time with you, but he never introduces you to any friends or family. You’re his special secret and he wants to keep things just between you two.

Allow this to make you suspicious because a man in love is proud of his woman. So if he’s not introducing you around, there’s a REASON. Like he already had a woman in his life and he’s cheating on her with YOU.

Keeping you a secret is one of the signs he doesn’t love you. Some sort of indiscretion is going on if he’s trying to keep you under wraps. Don’t think it’s sweet that he wants you all to himself.

Ask him why you haven’t met anyone in his life and if he won’t give you a respectable answer or introduce you to someone with a specific time frame, then you know he’s hiding something. You might need to walk away if this can’t be resolved. 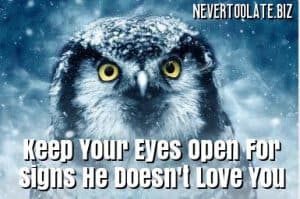 So there they are – the 10 signs he doesn’t love you even if he says he does. If you start to see one or two of these signs, be aware that something is not right with your dating situation or relationship.

Don’t put your head in the sand. Knowing and addressing a problem now is far better than in a few months or longer down the road.

The faster you know and decide what to do, the sooner you can find that healthy, lasting love you’ve been dreaming of.

Ready to find the right man? Take my Free Masterclass – 5 Astonishingly Simple Ways to Find “The One“